There are loads of funny, colorful, and useful words in Japanese that just don’t have a direct translation into English.

Japan has a long and rich history, and its famously complex language reflects that. The language of a country can give you perspective on and insight into the culture and attitudes of the people that use it. Naturally, there are a plethora of words in Japanese that simply don’t have a one-to-one English equivalent. They range all the way from the hilarious to the poetic to the spiritual. These words are all sure to put a smile on your face, and most if not all will have you wondering, “why don’t we have a word for that in English!?” 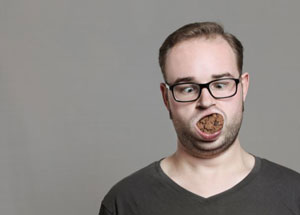 The word kucharā is a little dated, but it refers to a person who chews with their mouth open.

Japanese is absolutely chockablock with onomatopoeias, and the one for the sound made by chewing with your mouth open is kucha-kucha. Add that to the English suffix -er, as in “player” or “worker,” and you’ve got a perfect succinct word for noisy eaters.

While eating with your mouth open is acceptable in some cultures, in Japan it is considered quite rude. Slurping your noodles, on the other hand, is A-okay! So slurp away and then close your mouth to chew. Table manners vary a lot from country to country, so make sure to read up on eating dos and don’ts before jumping on a plane to Japan! 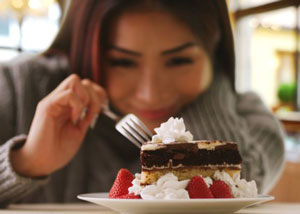 Anyone with a sweet tooth can relate to the mystery of the betsu bara, or “separate stomach.” This handy noun refers to the mysterious extra room you find you have for dessert after a large meal. While the science behind said phenomenon is actually known, this amusing word is perfect for explaining sheepishly why no, you’re not done eating thanks very much, and you don’t care for the judgement. (OK, maybe 'dessert stomach' is somewhat similar, but now you know Japan has a word for it too!) 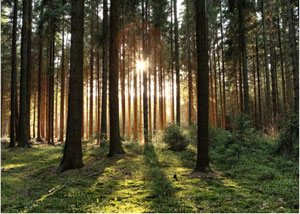 This beautiful word refers to the light that filters through the trees, dappling the forest floor. It’s a poetic word that evokes imagery of a peaceful, natural scene. Next time you’re out for a stroll in the woods, take a moment to appreciate the gently shifting komorebi and marvel at the fact that there’s no word for it in English! 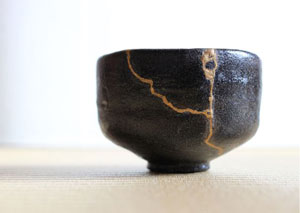 Wabi-sabi is the very Japanese style of art and aesthetics emphasizing simplicity and restraint. It is an appreciation of the beauty of imperfections and impermanence. Things and art that fall into this category are generally very simple but inspire a feeling of calm. Wabi-sabi brings to mind things like humble shrines and roughly made pottery. 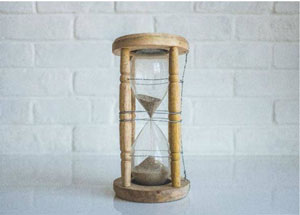 Mono no aware is very similar to wabi-sabi. It refers to appreciating the bittersweet impermanence of something’s fleeting beauty, since nothing lasts forever. It’s very in line with the buddhist idea of being in the moment and letting things go, although it also suggests a sort of wistfulness.

While both of these words are on the more old-fashioned side, the untranslated phrase mono no aware appears in one of Marie Kondo’s books, so perhaps it’s time for a comeback? 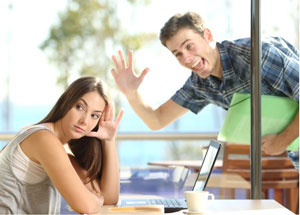 The English letters ‘KY’ are used as a shorthand for the Japanese phrase “kūki yomenai”, meaning “can’t read the room,” or more literally, “can’t read the air.” You can say a person is KY if they are socially awkward or inappropriate.

Japan has a very high context culture, which means that a lot of social interactions involve suggesting things indirectly, inferring implied meaning, and not speaking frankly or saying things outright. If this is at odds with your own cultural background, you might find Japanese conversation a little challenging to navigate at first! In the meantime, you may unfortunately be a little on the KY side as far as natives are concerned. 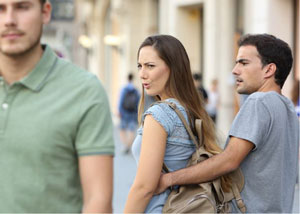 This one might seem a little harsh, but a Keep-kun is a placeholder boyfriend who is only kept around until someone better shows up. The unfortunate label comprises the English word “keep,” and the Japanese honorific “kun,” which is a suffix added to men’s names to show affection or closeness.

Take heart in the fact that this word is generally only used by older generations and has mostly fallen out of popular use. Hopefully that means there are fewer poor souls being used as Keep-kuns! 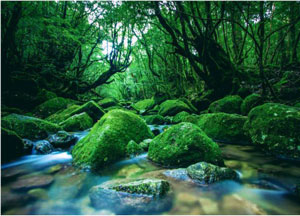 Literally “forest bathing,” shinrinyoku is the act of going into a forest to unwind and breathe in the fresh air. The refreshing feeling of spending time in nature and away from civilization is widely known to be good for your mental health, so how is it that we don’t have a word like this in English? If you haven’t yet, definitely try some shinrinyoku therapy; it is free, after all. 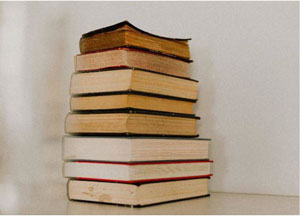 Tsundoku is made up of the words “tsun,” here meaning “pile up,” and “doku,” meaning “to read.” Book lovers are probably all guilty of this one, as it refers to the act of buying lots of books and not reading them, leading to a pile of unread books.

If you’ve just realised that you’ve got a bit of a tsundoku habit, let this be a sign that you should crack open a book or two! 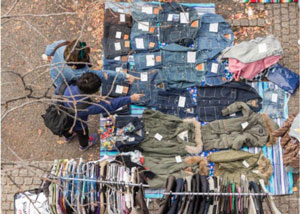 This super specific adjective is used to describe something or someone that has aged gracefully and gotten cooler with age. The closest English equivalent might be to say they’ve “aged like a fine wine.”

Young people nowadays just love old, weathered things like exposed brick or ripped jeans. As an appreciation of all things shibui gets more widespread, the need for a word to describe it could potentially follow! 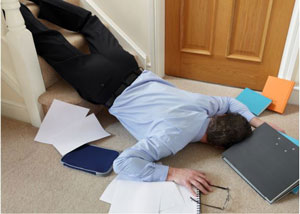 Batan-kyū is an onomatopoeia that belongs in cartoons and the most awkward moments of our lives, as it describes the sound of falling violently - batan -, and the stillness that follows - kyū. Think about the last time you fell flat on your face and the horrible tension that followed (inevitably broken by someone asking if you were OK.) 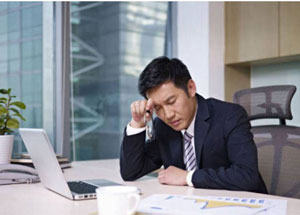 This dark word is somewhat well known in the English-speaking world these days, but is worth mentioning to understand some of the pressure that has arisen in some corners of the working world.

Defined as “death from working too much/overwork,” karōshi doesn’t just mean dying of stress-induced natural causes; it includes everything from keeling over at your desk because you’ve had a heart attack to even as far as taking your own life because your job is too stressful.

A tragic karōshi incident in 2015 got a lot of companies reevaluating the amount of pressure being put on employees. Hopefully things will improve soon, and one day this word won’t still be around. 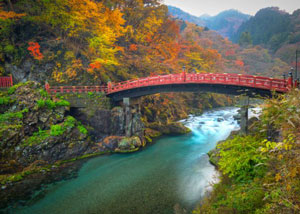 Perhaps best translated as “autumn foliage,” this succinct word describes the brilliant colors of the leaves in autumn. While not impossible to translate or at least describe, the fall leaves are definitely a bigger deal in Japan than in most other places as the rich red foliage here is just so beautiful. Every year people travel far and wide to see the most gorgeous leaves from the best vantage points. 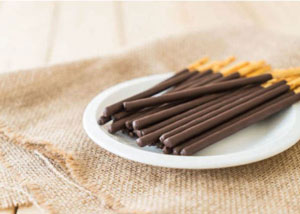 This charming phrase means that your “mouth is lonely,” and describes eating out of boredom rather than hunger. We’ve all had an unwarranted treat when there’s been nothing else to do, but for some reason just didn’t have quite the right word to describe this absentminded munching until today! Maybe giving this bad habit a name will make it easier to stop... 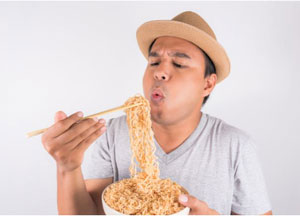 Japanese people really like their food and drinks to be piping hot, as in hot enough to cause moderate damage. Those lesser mortals who have to blow on their lava-like food before eating it are said to have a “nekojita,” or a “cat tongue.” This somewhat surreal word is said to have originated in the Edo period, and is based on the fact that cats (allegedly) don’t like to eat hot food. 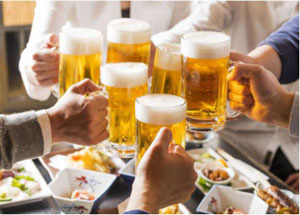 These can both be seen as pretty important in a lot of jobs in Japan. They generally refer to things like talking business over drinks with colleagues after work or having a chat while on a smoke break. While these can sometimes be effective networking skills in Japan, they certainly aren’t recommended for health reasons, and it seems younger generations are starting to stray away. 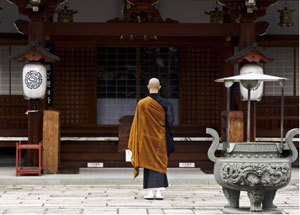 This means “three-day monk,” and refers to someone who gives up or gave up on something very quickly. It can also have the nuance of initially starting with much passion and intensity, only to then falter very fast. Buddhist monks have quite a strict routine of extremely early mornings, cleaning, and tough training, so throughout history quite a few people have understandably thrown in the towel early on. 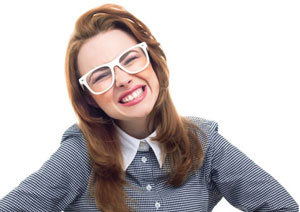 Arigatameiwaku is a combination of the words “arigatai” and “meiwaku,” which mean “grateful” and “nuisance” respectively. This is used to describe a very specific situation in which a person goes out of their way to do something for you that you didn’t want them to do in the first place. This “favor” ends up causing problems for you, but social norms force you to show gratitude anyway.

Most people have probably met someone who was insistent on being “helpful” even when nobody wanted them to be. For example, a computer illiterate yet confident family member who tries to do things for you on your laptop that you definitely could have done faster. These are the sorts of people that cause a lot of arigatameiwaku, oblivious to the true feelings of everyone forced to grit their teeth and hiss thanks at them. 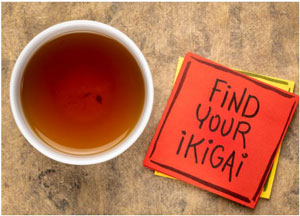 A combination of “ikiru,” meaning “to live,” and “gai,” meaning “reason,” your ikigai is therefore your reason for living or purpose in life. Your ikigai could be a hobby you’re passionate about, a special person or pet in your life, or some world-changing activism. Whatever it is, it gets you out of bed and lights a fire under you, so make time for your ikigai as much as possible!

If you’ve realised while reading that you might be a bit of a mikka bōzu, maybe you just haven’t found your ikigai yet! 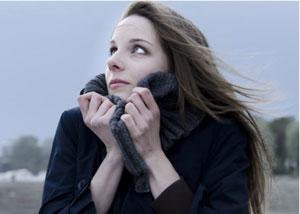 This is the first cold wind you feel in autumn that lets you know winter is fast approaching. It means “leaf-shaking wind,” and it might have you shaking too! Depending on your feelings about winter, the coming of kogarashi is either exciting or foreboding. Nicely reflecting a lot of Japanese culture, this word is both poetic and practical.

Every language has its own quirks that make them interesting and unique, and Japanese is no exception. With a great array of humorous and descriptive words for everyday life, as well as for highly specific situations, learning Japanese is a fun and rewarding way of learning about a people and culture with a fascinating history and present.

Take this as both a language and a culture lesson in one; when you come to Japan, you know now why it’s important not to be KY or a kucharā! And if you go for some rejuvenating shinrinyoku while you’re here, make sure to enjoy the komorebi and kōyō that you might not have appreciated as much before they were pointed out to you.

VIDEO| Speakin' Japanese: It makes me feel the history!