In early February, Japan marks the old lunar calendar’s last day of winter on what is called Setsubun. This day involves scattering beans to ward off evil and is the point where the Land of the Rising Sun begins its transition to spring. Though it may be cold outside, the early flowers of the season are already rearing their beautiful blooms.

If you’ve been in Japan a while, you may have heard of “hanami” blossom viewing. This springtime pastime is usually associated with Sakura (cherry blossom) season around late March and early April. However, there are plenty of early blooms like ume (plum), kawazusakura and momo (peach) which bloom in the early spring.

“Ume,” or plums, are the first of the three blossoms to bloom following the New Year holiday.

While cherry blossoms bloom and fall to the ground almost instantaneously, plum trees bloom gradually and keep their blossoms for nearly a month. The wide range of varieties mean you can enjoy the blossoms throughout spring until mid-April well past the cherry blossom season.

“We enjoy seeing plum trees blossoms in January when there are no other flowers,” said Hiroaki Tomita of Kanagawa’s Ofuna Flower Center. “The blossoms and their sweet aroma subtly pervade the air during this coldest time of year to signal that spring is coming.”

In the Kanto Plain, Tomita said the peak viewing should occur between late February and mid-March this year.

During the season, expect to see about 300 different kinds of Japanese plum blossoms ranging in color from white to crimson, Tomita said.

Many people may be surprised to learn that plum blossoms were actually the most prized in ancient Japan until the late of Heian period (794-1185). In fact, they are cited in old Japanese “tanka” poems more often than cherry blossoms.

Unlike cherry trees, the aesthetic quality of plum trees is not just the blossoms. The shape of the trees and their branches also enhance their beauty, according to Yukiko Nakane of Kairakuen Garden.

“Plum trees start twisting when they are about 80 years old,” Nakane said. “The unique shapes of these old trees help make them even more beautiful when they bloom.”

Plums were originally used as medicine and as emergency food during famine, Nakane said. These days, you’ll find pickled plums and plum liquor in Japanese grocery and convenience stores.

For plum viewing, Nakane recommends Kairakuen Garden, a 171-year-old traditional Japanese garden in Mito City, Ibaraki Prefecture. The stunning garden is home to a whopping 3,000 plum trees and over 100 different varieties making it a popular spot for visitors in the springtime. 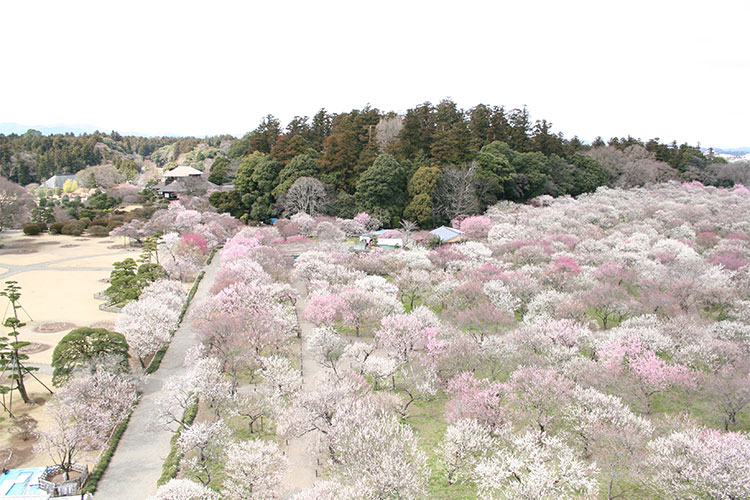 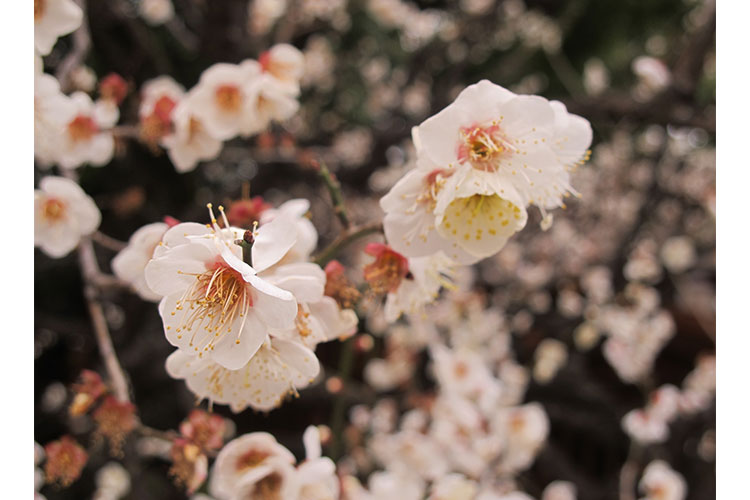 Kawazusakura is a variety of Sakura blossoms that bloom in early February. Compared to someiyoshino, the most popular variety of cherry blossoms which bloom between late March and early April, Kawazusakura has larger, more reddish blossoms. Like plum blossoms, this type can last up to a month, outlasting the more delicate late-blooming someiyoshino.

The discovery of this variety of cherry blossom happened in 1955 by accident. A local found the blooming wonder in a Kawazu Town, Shizuoka Pref. grassfield. Soon, the Kawazusakura tree would be the designated tree of the town.

Today, more than 850 Kawazusakura trees line the river for more than four miles around Kawazu Station (within a 2-hour drive from most of U.S. military bases in the Kanto Plain).

Another popular spot for viewing the early cherry blossoms is around Miurakaigan Station, a 40-minute drive from Yokosuka Naval Base. Here 1,000 Kawazusakura trees line the railroad between Miurakaigan Station and Komatsugaike Pond. Visit in mid-February for peak blossom viewing. 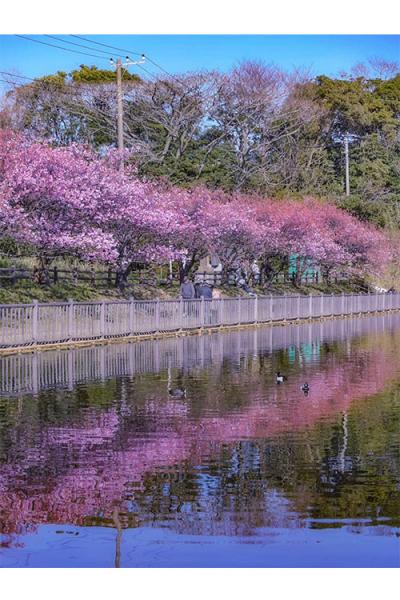 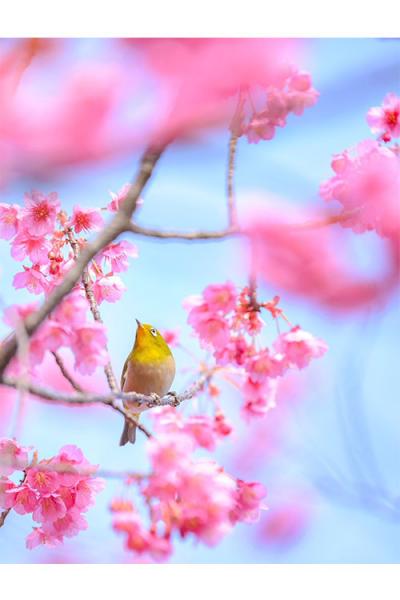 Just like cherry blossoms, peach blossoms are in full bloom around mid-March to early April. Peach trees have large, brilliant blossoms and give off a sweet aroma. As the blossom is compared to women’s virtue in Japan, it is believed to ward off evil. Every March 3, a sprig of peach tree is included in the hina doll displays for Hina-Matsuri (Doll Festival).

You’ll see and smell plenty of peach blossoms around the Kanto Plain, but perhaps the most famous place to view peach blossoms is in Fuefuki City in Yamanashi Prefecture.

According to a spokesperson for the Fuefuki’s Tourism, Commerce and Industry Division, more than 300,000 peach trees blanket the city in the pink and reds for an unbelievable sight every year. This spring jewel is only an hour and half away from Tokyo, making it well worth the drive.

Another great spot to enjoy peach blossoms is at the Shakado Parking Area near the Ichinomiya-Misaka Interchange of Chuo Expressway. From the parking area, walk up to the Shakado Museum of Jomon Culture for a panoramic view of the blossoms against a backdrop of the snowcapped southern Japan Alps. 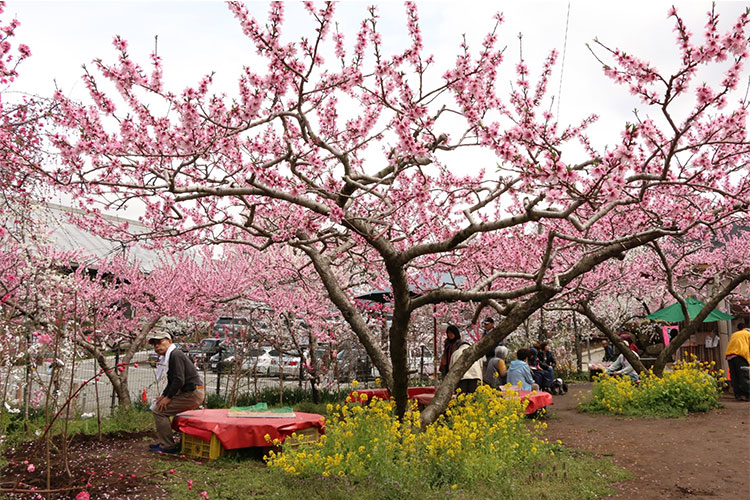 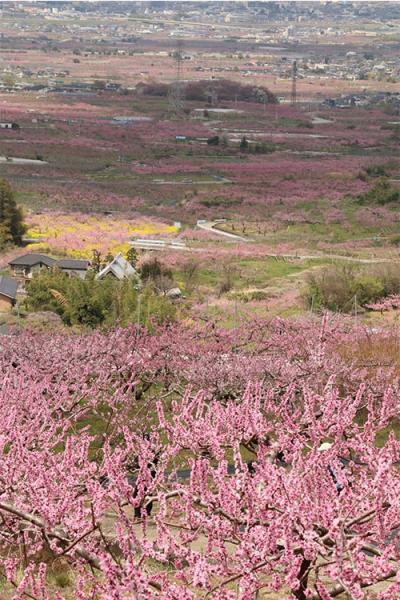 With spring right around the corner, don’t sleep on plum, peach and kawazusakura blossoms. These beautiful blooms will help warm your winter blues and get you ready for the season!

VIDEO| Speakin' Japanese - Cherry blossoms are at the full bloom