With the peak of winter past, the stage is set for new beginnings as Japan eases into spring. Plum blossoms continue to bloom in parts of central Japan and further north. The colorful Hinamatsuri girls' festival is held nationwide on March 3 and cherry blossoms start blooming in Tokyo and other warmer locations to herald the start of spring proper.

Although the weather in March is significantly warmer and more spring-like than February, temperatures can drop suddenly. Skiing and snowboarding are still possible at most resorts and languid hot spring excursions remain a popular way to spend some of the coldest days.

Know Before You Go

The winter sports season is still very much alive at some Japanese ski areas. Major resorts like Niseko and Shiga Kogen actually stay open right up to the first week of May, albeit with diminishing returns in snow quality.

Spring skiing benefits from warmer temperatures and relatively empty slopes compared with winter. Sudden snowfalls do sometimes occur at higher altitudes, though rain is a more likely occurrence. Check weather reports in your area to see if a ski excursion is a viable option on the day. 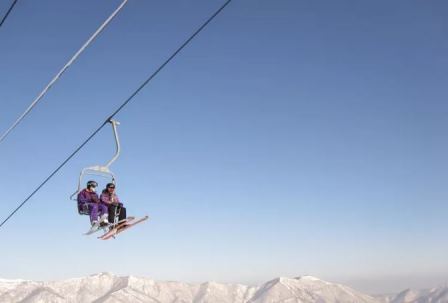 Getting out and about

With warmer temperatures and slightly longer days, March sees a rise in the number of people taking day trips and weekend excursions. Popular destinations include Kyoto , Nara and Hiroshima as well as rural hot spring resorts. Gero Onsen is a noteable resort—accessible from Nagoya , it can be combined with a trip to Takayama and Shirakawa-go .

The rich pageant of Hinamatsuri

As with many Japanese holidays, most people experience Hinamatsuri in a domestic setting inaccessible to short-term visitors. On and around March 3, however, several shrines and temples around the country hold Hinamatsuri celebrations for the general public.

At the Nagashibina event at Shimogamo-jinja in Kyoto , you can pay a small fee and partake in the ancient custom of setting straw dolls adrift on the river. Elsewhere in Kyoto, the shrine festivities at Ichihime-jinja feature live demonstrations of Heian period (794-1185) courtly games by performers in authentic period costumes. Lastly, Hokyoji Temple opens its vast doll collection for public viewing from March 1 to 3.

Light and color figure prominently in March celebrations, with nighttime illuminations being a common feature of festivals in Kansai. Kyoto's Higashiyama district hosts the Hanatoro Festival (March 9-18) in which thousands of lanterns light up a route stretching from Shoren-in to Kiyomizudera Temple . During this time, various temples along the route extend their hours to stage lavish illuminations for visitors.

The Omizutori event takes place every March 12 at Nigatsudo, a secondary building of Todaiji Temple in Nara . After months of preparation, specially appointed priests perform the ritual of drawing water from a sacred well, while others brandish huge torches on the terrace above to ward off evil spirits. The whole thing marks the culmination of the 1250-year-old Shunie Festival (March 1-14).

If you're in Kansai, you can take advantage of a generous two-week window to attend the March Grand Sumo Tournament at Edion Arena in Osaka . It is advisable to book in advance, as only a small number of tickets are allocated for sale on the day. For information on schedules and booking, please consult the following link: http://www.sumo.or.jp/EnTicket/

Less famous and fewer in number than cherry blossoms, plum blossoms are also a favorite in Japan and a symbol of early spring. Typically, the season begins in February and lasts into March, with dates varying from place to place. The famous Kairakuen Garden in Ibaraki has a season beginning in late February and ending in mid-March. Bairin Park in Gifu Prefecture spans the month of March, peaking somewhere around the middle of the month.

Warmer areas of Japan start to welcome cherry blossoms in late March, and you can generally count on seeing them in Tokyo during the last ten days of the month. Other big cities like Kyoto , Osaka , Nagoya and Fukuoka follow a similar timeline, varying from year to year. While cherry blossom season is short in individual locations, it runs nationwide, through April and into early May. The following has a useful guide for peak blossoming periods around Japan: https://www.jnto.go.jp/sakura/eng/index.php

20 weird facts about Japanese cherry blossom to ring in the season!

Omamori, Ema, and Omikuji: Why Japanese Lucky Charms Are Amazing!