If learning Karate Kid moves has been a lifelong dream, you’ll soon have the opportunity to “wax on” near Torii Station. 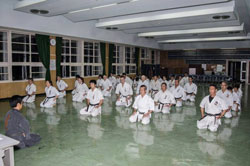 While Mr. Miyagi will not be waiting for you, other highly-trained professionals will be readily available at Okinawa Kenpo Kenyukai school to lead you on your journey to becoming a karate master. Starting Mar. 2, the karate dojo inside Murasaki Mura will be accepting students of all ages and levels to join in on one of the island’s treasured martial arts.

The classes consist of basic moves and forms then a split into smaller groups for skill training based on skill level.

The first lesson at the school is free and you will not have to bring a karate form. Get your sportswear on and head to Murasaki Mura.

“We are impressed with how passionate Americans are about karate. They often train harder than Japanese,” said Tooru Kyan, a director at Okinawa Kenpo Kenyukai said. 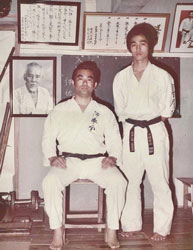 Okinawa Kenpo Kenyukai has its roots in an ancient martial art called "Ti" in Okinawa. One of the earliest ancestors of the school was active in the 19th century at a later stage of the Ryukyu Kingdom (1429 to 1879).

Adding to the ambiance, Murasaki Mura, a theme park constructed as a TV set to replicate the Ryukyu Kingdom, is the perfect setting to encourage your study of karate.

Are you ready to become a black belt? Visit Okinawa Kenpo class and find out!

Okinawa Kenpo Kenyukai (Karate) Class
Where: Karate dojo inside Murasaki Mura
GPS Coordinates: N 26.406896, E 127.719777
Date: Starting Mar. 2 and every Monday thereafter.
Time: 7 – 8:30 p.m.
Email: big.dog12@icloud.com
*First timers will be granted a free lesson and a free access to Murasaki Mura. Please inform attendants at the gate that you are participating in the karate class.
*Monthly fees for regular students are 3,000 yen for middle school students and below, 5,000 yen for high school students or older.