Kin Town, Okinawa offers look into the past

Kin Town, Okinawa offers look into the past

Kin Town, the host municipality of Camp Hansen, is sometimes talked about in the past tense. It is true that the town’s prosperity as a “military town” peaked in the 60s and 70s, during the time of the Vietnam War. Now, the shine of the town may no longer be what it once was.

However, the town continues to rally and attract people, if not in the same way as it once did.

Visiting the town offers opportunities to see the town’s attractions both burgeoning and passed down from the past.

Long-running restaurants like King Tacos and Gate 1 continue to be popular. The taco rice, fried rice, or cheeseburgers that they serve up to exceptional volumes attract many hungry minds.

The unique streets inspired creative minds as well. Movies and music videos have been shot there. In “A Sign Days/Via Okinawa”, a movie from 1989, the town played a background to depict the rise and fall of a local rock band. In “Boling Point”, a movie by decorated director Takeshi Kitano, protagonists visit the town before their last stand against gangs. Or in a music video titled “Kata Omoi Diary”, a Japanese girls’ band ran around and shot fireworks in the old streets.

East Side of Camp Hansen

Coastal Area
The easiest way to get to Camp Hansen is to take the expressway and get off at exit No. 8. Heading north on Route 329 with Kin Bay to the right takes drivers to neighboring areas of the military facility. Along the way, a unique collection of shacks and tents come into view on the left. One of them is a farmer’s market called Ishija Yuntaku Ichiba. This local market has all sorts of items. Starting with local produce and canned foods, items range from used books and clothes, to military items such as MREs.

Rural Zone
Going further north on the coastal road leads to a vast flatland where paddy fields of taimo spread wide. The view presents a look much different from other parts of the island where sugarcane fields or hilly jungles are most typically seen. 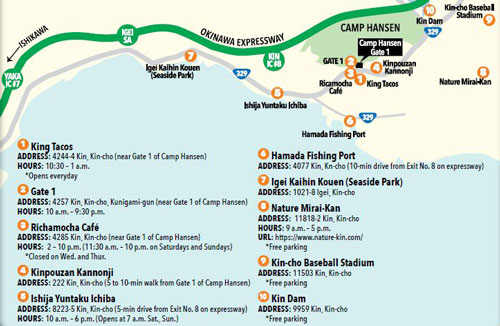