Kudaka Island: One of Okinawa's 'Islands of Gods'

Kudaka Island: One of Okinawa's 'Islands of Gods'

In Okinawa, sacred sites can be found on many of its 160 islands. Each remote island likely has its own set of legends and mythology attached, while further stretching the concept of “Islands of Gods.” 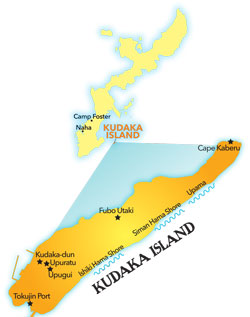 Kudaka Island, about three miles off the southeastern coast of the main island, is one of these places revered for its sacredness and untouched landscape. To be precise, it is recognized as the most sacred among all the islands.

You may have noticed this small island in the distance while visiting Sefa Utaki, a prominnt sacred site on the main land. Kudaka Island spreads over 336 acres and is a mere 5 miles in circumference, but it draws many people searching for peace and spirituality. Visitors board daily ferries from Azama Port to reach this destination known for its beautiful nature and unique cultural heritage.

Kudaka Island is home to many areas where traditional rituals took place throughout history. Such traditions carry on today, and some of these locations are no longer open to the public. Despite this, the island is a great destination away to see untouched beaches, forests and learn about customs of the Okinawa of yesteryear.

Upon arrival at the port on Kudaka Island’s southern coast, visitors rent bikes to enjoy the island’s terrain and take in the pleasant climate. The southern section of the island is made up of mostly residential homes and old historic buildings lined up along maze-like streets. Head toward the mid and northern parts of the island to take in the pristine beaches and untamed forests.

Visitors will find the roads along the coastlines perfect for smooth bike rides and the landscapes on all of Kudaka Island’s coasts and sections to be breathtaking. Among the beaches here, Ishiki Hama is perhaps the most famous.

Reach Ishiki Hama by heading 15 minutes northeast by bike from the port. This sandy shore dotted with shrubbery and interesting rocks also offers a look at rock reefs during the low tide, making for a colorful sight. According to Yasuo Higa, a photographer who is known for his work on Kudaka Island, the reef spreads somewhere close to 1,000 feet from the shore. 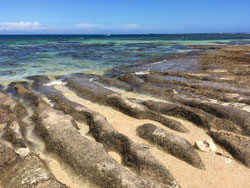 This beach is also highly regarded because according to legend agriculture originated here. It is said that a pot containing grains from a utopia called “Nirai Kanai” washed up on Ishiki Hama’s shores. During the Ryukyu Kingdom (1429-1879), white sands were brought across the water from Ishiki Hama to blanket Sefa Utaki during rituals held there. Kings and priestesses also visited the beach for rituals.

Next, head to Cape Kaberu, another sacred site where Amamikiyo, a god, is said to have landed and started building Ryukyu. The white color of the road leading there is a stark contrast to the surrounding lush green plants and blue sky.

From there, head southward through the midland for about 20 minutes to reach Kubo/Fubo Utaki. Here amongst the forest thick with Chinese fan palm trees, only women were allowed to set foot and participate in an Izaiho induction ceremony for a circle of members responsible for conducting the rituals for the gods. The last Izaiho was held in 1978, but the custom has since been discontinued due to the lack of members to carry it on. The site itself is not accessible to the public now, but learn more about its history at the information board nearby. 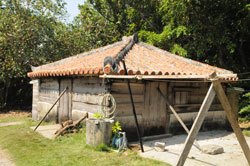 From there, heading south through the intricate streets may present a challenge to navigate, but there are two spots to check out: Kudaka-dun and Fukama-dun. These two sites for rituals are affiliated with two lines of priestesses and two of the oldest families on the island. Kudaka-dun is comprised of two white-walled shacks with red brick roofs, where Shirataru, the earliest islander, is said to have prayed for the island’s prosperity. On the premises, you’ll find a hut for smoking sea snake meat. The interior is not visible but go around back and check out the caged sea creatures awaiting their fate. Note that the forest area behind Kudaka-dun is off-limits.

Next, head to Fukama-dun, only a few minutes’ walk away. This has a similar structure to Kudaka-dun but one of its shacks was where the kings of the Ryukyu Kingdom would be seated for ceremonies. This site still remains at the center of many rituals on the island and entry into the shacks is prohibited. 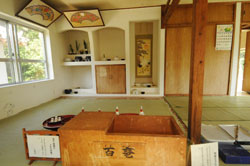 Upuratu is another site associated with one of the oldest families. Located near Kudaka-dun and Fukama-dun, this traditional house is believed to be a place where King Shotoku, the 7th king of the first dynasty of the Ryukyu Kingdom, had a rendezvous with a young woman, which would eventually lead to the dynasty’s downfall in 1469.

Upuchinguchi, or Chimintumai, attests to a history long before the times of the Ryukyu Kingdom. This site near the south port, was a shell mound dating back around 5,000 years, according to the Okinawa Prefectural government.

Although some of the traditions of Kudaka Island are no longer practiced, the location itself is a unique place to remind visitors of Okinawa’s spiritual past and present. 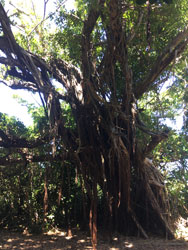 One of the old customs still partially conducted here is fuso, or aerial burial. This type of burial is a form of entombment allowing the deceased to return to the earth through exposure to rain and wind, according to Yuji Uchima, a local tour guide.

Sea snakes, which were thought to be gifts from God and highly valued during the time of the kingdom, are allowed to be captured only by a select few. Another tradition involves capturing the sea snake with bare hands.

According to Uchima, islanders think the island itself is borrowed from the gods, thus land should not be owned by humans. This probably explains why there are no supermarkets or convenience stores on Kudaka Island, only small stores in the south. It is also prohibited to remove any of the islands natural resources including rocks, sand, coral, plants and coconut crabs.

This island is not a typical touristy destination and it doesn’t treat itself as such. “We don’t promote the island as a tourism spot,” explained Uchima. The island’s untouched nature and serenity are a product of the way it is cared for by locals and visitors alike.

Touring on Kudaka Island requires attention to manners and the rules of the island, and when you’re there, you’ll see why this corner of paradise remains preserved for future generations.

VIDEO| Quick and tasty Japanese curry in a bag

Unwind yourself on Okinawa's Okuma Beach