With relatively cool temperatures and many spectacular natural landscapes, Japan's Tohoku region is the perfect destination for a summer getaway! Consisting of six prefectures in the country's northeast – Aomori, Akita, Iwate, Yamagata, Miyagi, and Fukushima – this area is filled with hidden gems.

Here we'll introduce some of Tohoku's top scenic summer spots, from dynamic cliffs to quiet coves where you can swim in the sea.

Located in Miyagi Prefecture is Sendai, the largest city in the Tohoku Region. Matsushima, famous as one of Japan's Top Three Scenic Views, is a mass of nearly 260 islands, big and small, that float in and around Matsushima Bay.

Since ancient times, people have been fascinated by this beautiful natural landscape. In recent years, it has become one of Japan's leading tourist destinations.

Saigyo Modoshi no Matsu Park, located atop a small hill, is just one of Matsushima's many spots that overlook the sea and islands.

To get there, take the JR Senseki Line from Sendai Station and get off at JR Matsushima Kaigan Station. The park is about 20-minute away on foot, but be warned: it's a pretty steep walk! You may want to take a taxi during the hot summer months.

There are several observatories in the park that offer a bird's-eye view of Matsushima. The summer landscape contrasts beautifully between the blue sea and the dark green trees on the islands. The white boats bobbing along the quiet bay also blend in well with the scenery.

The Matsushima landscape changes depending on the time of day and season. We recommend staying for sunset, which paints the sky a bright red over the bay. In the spring, Matsushima becomes a panoramic view of cherry blossoms! 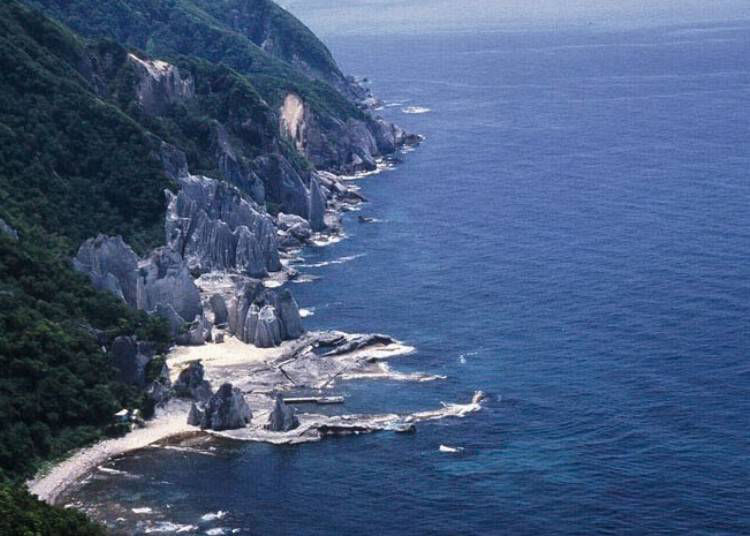 Saimura is a relatively untouched natural land located on the Shimokita Peninsula in Aomori, the northernmost prefecture of Honshu.

The rocks of Hotokegaura were carved by the rough waves, wind, and snow. The white-green tuff rocks of this natural monument and national scenic spot extend for nearly 2 kilometers!

Take the Aoimori Railway from Hachinohe Station to JR Shimokita Station. From there, you'll want to rent a car or hail a taxi, as it's about 1 hour and 20 minutes away.

You can view the powerful cliffs from atop the observatory or up close from the promenade near the parking lot!

You could even take a sightseeing boat from Sai Port. Board the boat at Tsugaru Kaikyo Cultural Center Arusas, about 15km from Hotokegaura (available in Japanese only). Please note that these boats only run from late April to October, and may suspend service in the event of bad weather. 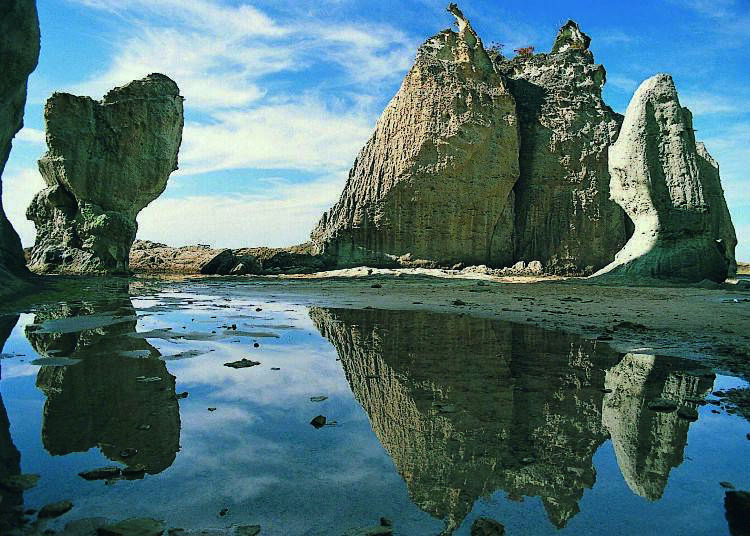 The gigantic rocks have an overwhelming presence when viewed from below. Without a single building in sight, you'll feel as if you've traveled to a different planet! The sea is so beautiful and transparent, you can see straight through to the bottom! In the summer, the dazzling sunlight reflects brilliantly off the surface.

The sunset behind the white rocks is an amazing photo op you don't want to miss! 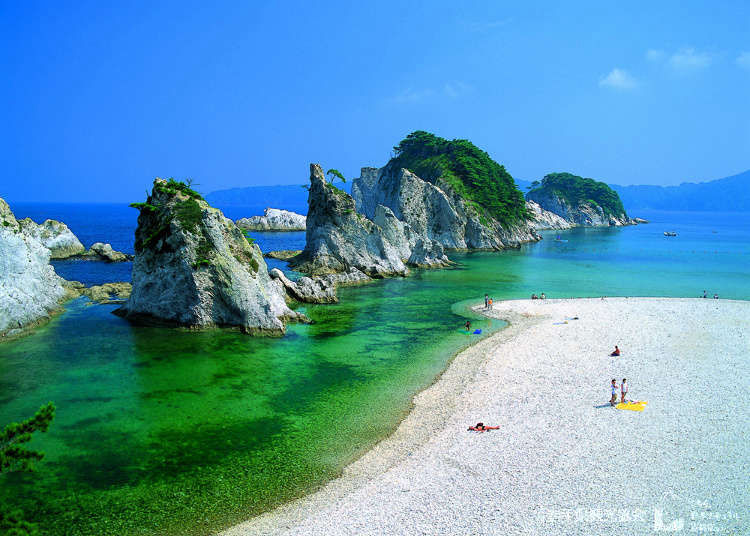 The Jodogahama Coast is located in Miyako, Iwate Prefecture, the second largest prefecture in Japan.

Jodogahama is a scenic spot where rhyolite, a type of volcanic rock, protrudes out from the clear blue coves. The name, Jodogahama, comes from the Buddhist 'Jodo,' or 'Pure Land,' as this place has been said to be a pure paradise. 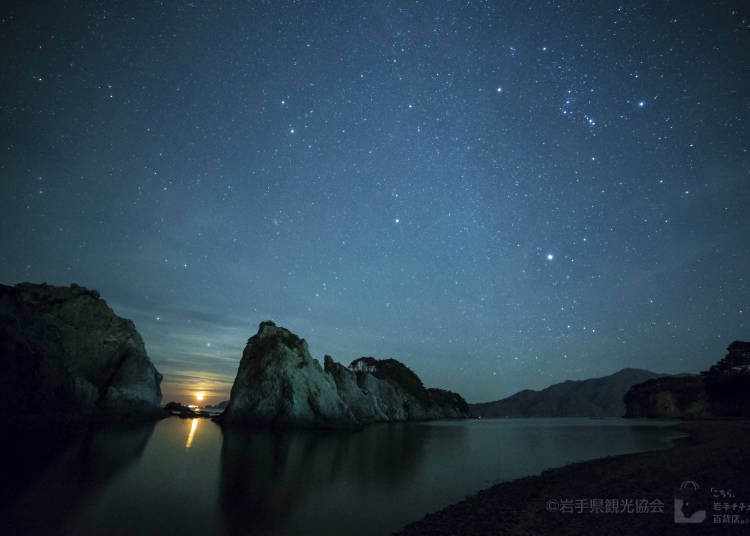 The blue sea and white rocks are certainly beautiful in the daytime, but the twinkling starry night sky is also something you won't want to miss! 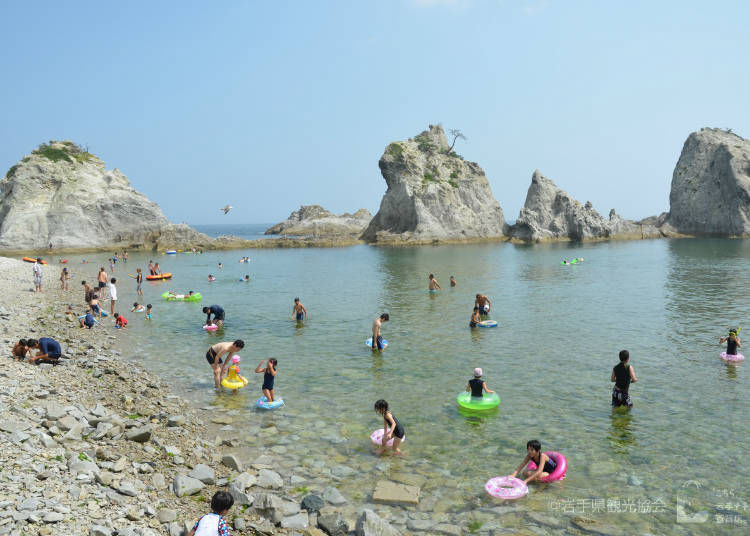 You can soak in the calm coves during the summer. Enjoy bathing on the beach as you peer into its amazingly transparent waters! 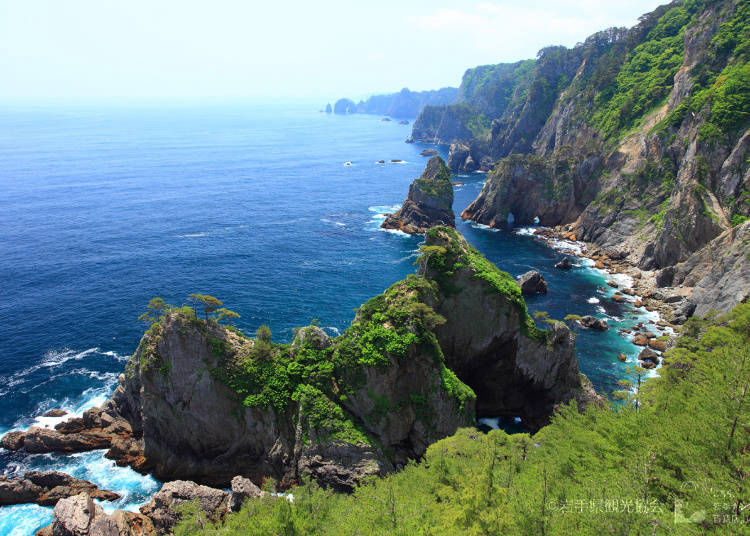 Kitayamazaki, located in Tanohata Village, Iwate Prefecture, is known for its dynamic coastline of continuous cliffs.

The first observatory is just a short walk from the Visitor Center, where you can enjoy a panoramic view of Kitayamazaki.

The breathtaking 200-meter tall cliffs stretch for about 8 kilometers. In the summer, you may even see the haze from the chilly Tohoku mountain winds.

For those who want to experience the size of the cliffs up close, ride the Kitayamazaki Sappa Boat Adventure, a small rocky shore boat operated by local fishermen. (Photos with English descriptions are provided.)

Cancellations may occur in the event of bad weather. This is a thrilling excursion through the narrow rocks that you won't get from the larger sightseeing boats!

Ofunato is located on the southern coast of Iwate Prefecture. This is where you'll find Goishi Coast. Jagged coves, strange rocks, and caves dot the coastline for nearly six kilometers!

To get here, take the Iwateken Kotsu Bus Ofunato-Morioka Line from Morioka Station (about 3 hours). Get off at Sakari Station, and take the JR Ofunato Line BRT bus (about 20 minutes) to Goishikaigan-guchi Station. From there, it's about 10 minutes by taxi or about 40 minutes on foot.

The coastline is full of amazing landmarks, including the three caves of Anatosh-iso, Kaminari-iwa (Thunder Rock), where the thunderous sound of waves echo as they hit the rocks, and Goishi Beach, known for the black gravel that resemble its namesake Go stones.

At Cape Goishi, there's an observatory that protrudes out into the sea. Look out at the amazing view and feel the refreshing sea breeze on your face! 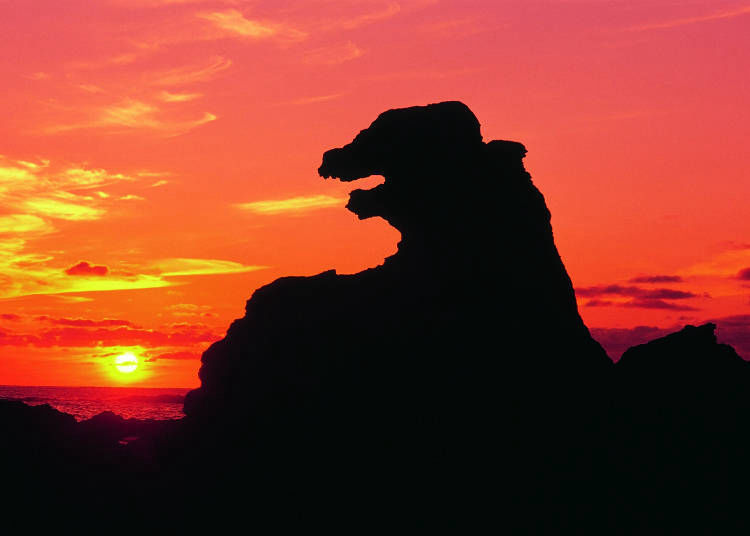 Oga Peninsula, which juts into the Sea of Japan in northwestern Akita, is famous for Godzilla Rock, a huge rock formation reminiscent of none other than the world-famous fictional monster, Godzilla!

To get to Godzilla Rock from Akita Station, take the JR Oga Line (about 1 hour) to Oga Station. From there, take the Oga City bus from Oga Station to Hokakejima (about 30 minutes). It's about 5 minutes away on foot.

Godzilla Rock is located on the rocky shore of Shiosezaki. This volcanic rock was created by an eruption many years ago. Over the years, it has been eroded by the wind and waves into its current shape, which resembles the profile of Godzilla. It is also a popular photo spot!

The best time to take a photo is at dusk. The silhouette of Godzilla clearly stands out against the sunset-painted sea in the background. If you catch the sunset at the right time, you might be able to see Godzilla blowing fire from his mouth! The image is so powerful, you can almost hear him roar!

Did you know?: The three views of Japan