You don’t need to be a wizard at Hogwarts to make friends with owls.

Owls Adventure Park in Naha offers a place where people can hang out with the birds of prey and other animals in a nature-like environment. 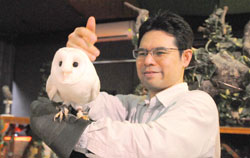 While there are “owl cafes” in places like Tokyo and Osaka, this park, located next to the famous Makishi Market Place, surprises even those who have visited places on the mainland, according to Ayumi Suzuki, who runs the owl park.

“I visited places across the country where you can hang out with owls. More often than I thought, I encountered aggressive owls,” Suzuki said. “The biggest appeal of my shop is that our owls are very gentle as they share a sense of trust with humans. Many customers of ours say they had never seen owls so friendly toward humans.”

That’s probably one of the reasons why this place is not a café. One step inside, visitors find themselves in a dusky space that feels like a forest at night. People literally become guests in this “home” of the owls. 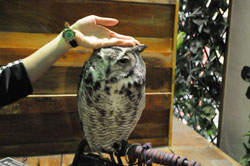 Perched on a tree branch close to the entrance were relatively small owls, like “Penta,” an Indian scops owl that welcomed visitors. Using the small owl, Suzuki showed how to touch the creatures, using the back of the hand or index finger.

When Suzuki touched the tiny head of Penta, the owl closed its eyes, seemingly content with the massage. I tried the same, and Penta didn’t close eyes, but curiously stared at the big smile my face.

“It’s hard to tell if stroking owl’s head really makes the bird feel good. But some owls of ours lower their heads to encourage people to keep going,” said Suzuki.

I wasn’t sure if my massage made the little owl happy, but it made me feel great.

In the deep part of the room, bigger owls sat quietly along the wall. From a distance, they looked aloof with no emotions. But at a closer look, they were more animated. Some looked magnificent and showed funny faces with their eyes when they were touched. Some looked as if they were dancing by turning its body left and right. And there was also a “Hedwig,” who looked straight out of Harry Potter. 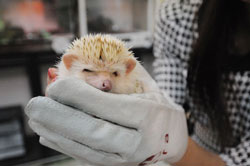 Each owl had its name and description on a card. Some respond by hooting or nodding, if addressed by their name, according to Suzuki.

According to Suzuki, Owls Adventure Park has 26 owls. The birds work every other day, with 13 working while the other half are at rest. The idea is to take good care of the birds, and staff members treat the owls as their families. The same goes for other animals, including a hedgehog, flemish giant rabbit, common leopard gecko, prairie dog and ball python, which are kept in a section called “Animal Land.”

“Many people from U.S. military bases have come and seen our owls,” Suzuki said. “Many of them come back as repeat customers with friends and families. It’s a good place for families with kids.”

After spending some time with the owls, I was already thinking about coming back and bringing my own family. 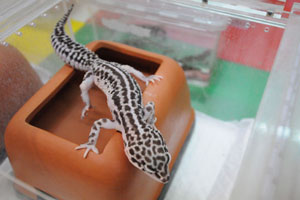 A stroll through Okinawa's good-luck trees