It was a period of rapid change. Men and women walked in kimono and the latest haikara (high-collar) Western fashions on noisy streets of horses and rail-riding street cars hemmed in by wooden Japanese merchant shops and the latest in English architecture. Smoke rose from wood-burning fires and steam engine smokestacks alike. And what made this modern progress possible? A religious leader, an emperor, commanding the nation for the first time in millennia.

The Meiji-era (1868-1912) saw a feudal 17th century society push itself at break-neck speed into a modern, technology-driven world, resulting in a combining of the foreign with the Japanese to create something new and unique to this time and place. 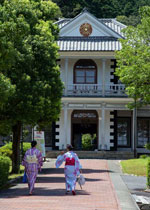 Thanks to Meiji-mura, this Victorian/Edwardian Japan is still around in the form of a sprawling million square meter architectural park and open-air museum dedicated to preserving the architecture of this era. It’s a history lover’s architectural wonderland because it has everything and in quantity. It’s like Disneyland’s Main St. USA except it’s real and every single building has a personal story to share. More than 60 buildings- homes, government buildings, schools, churches, military barracks, machine shops, hospital wards and even a few breweries, have been brought together from across Japan to recreate the era and educate on it.

Most buildings have been restored as miniature museums within a museum or kept ‘lived-in,’ to an extent, keeping the context of the building alive beyond the external façade and teaching about various aspects of the period. Just walking the short Renga Dori (Brick Rd.) visitors bounce from a telephone exchange with a collection of antique phones, to a brewery-turned-restaurant, visit a merchant’s home complete with home furnishings and end up at a government office with displays on important diplomats from the era.

It’s this little bit of everything approach, sharing the mundane parts of history that makes up an era that makes Meiji-mura interesting and relatable. I especially enjoyed the ‘lived-in’ spaces, like the elementary school classroom with worn desks and chalkboard, the rows of tidy beds in the Red Cross ward and the Russo-Japanese War-era barracks room with its soldiers’ kits and rifles still waiting for their owners to return from drill. All the little details of daily life are on display as they were meant to be seen and not just sitting behind glass, though the rifles were annoyingly chained down for some reason. 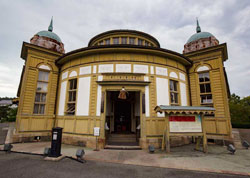 And it wasn’t just the good visual that makes places like the barracks appealing. Reading its story and learning that it survived the May 1945 Nagoya air raid when the castle it was next to did not, or realizing that the garrison hospital beside it also survived and would have handled victims from the air raid gave me a lot more to think about than if it was just a nicely prepared room or replica. These are the places history happened.

I was also allowed to handle some rather delicate artifacts here as well. There are a few homes of famous people, one of which belonged to Marquis Saigo Tsugumichi (The real “Last Samurai’s” brother), and was used to entertain state guests. The dining room is furnished with Crown Prince Yoshihito’s dinnerware and furniture, which was given to Saigo. Yoshihito would better be known as Emperor Taisho, and here a guide was telling me to go ahead, sit in his special-made French chair and hold one of his ornate China tea cups.

In addition to the architecture Meiji-mura also has the best rides - real working steam engines and street cars. A little 1910 Kyoto street car took us halfway across the park, and our conductor rang his bell at crossings so that the people-catcher net on the front wouldn’t be put to use. Then we rushed to a train station to board a train to take us across the other half. It was pulled by a steam engine that’s been running since the Taft administration and we rode in one of the three cars, all of which are more than a century old as well.

That’s just a really small sampling of what we did in one day and doesn’t even get into that time I spent in Meiji prison. It’s like regular prison, but with worse toilet facilities. 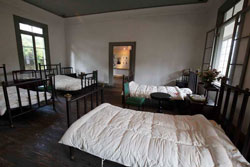 To best experience the Meijiest Place on Earth in the summer, I donned the appropriate clothing, a yukata. Most of the other visitors wore yukatas and fedoras or straw hats as well. The cool and loose clothing is practical for the hot weather and it makes everyone look like they’re part of the period. To set off my outfit, I wore a brown fedora and my every day footwear, a pair of reproduction 1930s boots. As boot design didn’t change much in the early 20th century it was perfect. If you don’t have a yukata there’s a shop on the Brick Rd. that rents both yukata and other period clothing for the day.

All external building signage is Japanese, English and Korean, but inside displays are just Japanese, though it isn’t difficult to figure out artifacts.

Meiji-mura is near Inuyama, Aichi Prefecture, which is less than an hour ride on the Meitetsu Railway from Nagoya. The bus to Meiji-mura leaves from Inuyama Station and the ride is less than 500 yen one-way. 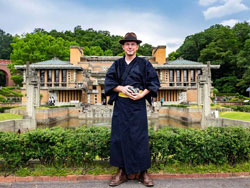 Admission is 1700 yen, but for 2700 yen the ticket includes all-day rides on both the tram and train. I visited in August and wore a yukata, which got my ticket discounted by 1000 yen, so I enjoyed the rides for free. I had to explicitly ask for the discount, which is only advertised on the Japanese-language version of the website, otherwise I was going to be charged full price.

If you visit in early August, there are nightly jazz concerts and fireworks as well as extended hours (10 a.m.-9 p.m.). This awesomeness is counter-balanced by the heat index of about 35-38 degrees Celsius. I saw almost everything at the park in one day due to the extended hours, though normally it closes at 5 p.m. and would necessitate a two-day visit to take it all in.

If in town for a few days I recommend seeing Inuyama Castle, one of the few original castles in Japan, Momotaro-jinja, which is a shrine themed to the Japanese folk tale, and the Gifu-Kakamigahara Aerospace Museum, which is just across the prefectural line in Kakamigahara, Gifu Prefecture. The aerospace museum has a rare World War II Ki-61 ‘Hien’ fighter and a 1:1 scale replica prototype Zero fighter among its collection.

For other open-air museums like Meiji-mura there is Sapporo’s Historic Village of Hokkaido in the far north and Nagasaki’s Glover Garden in the far south.