All throughout Okinawa, even today, you’ll find remnants of the Battle of Okinawa, one of the major World War II battles fought over the course of three months in 1945. This was one of the deadliest clashes and resulted in many deaths and destruction on both sides.

Because of this, you’ll find many historical points, burial mounds, memorials and informational markers related to the battle and those who were lost. Though many of the markers have English translations, you may find some only in Japanese, or other sites might be difficult to access due to Okinawa’s unique topography and vast jungle.

One Facebook group—Okinawa Battle Sites— is aiming to share with others the history and locations of these important sites with others.  Steph Pawelski, a military spouse, started the group in 2021 when she realized that she had so much information and knowledge to share after her family’s time on Okinawa from 2013-2019. Pawelski and her family visited many battle sites during those years and wanted an interactive way to exchange information with others, she said.

Though Pawelski and her family are currently in California, she said they will be PCSing to Okinawa again soon.

Below is a short Q&A with Pawelski about the group and what you should know about visiting these historical locations throughout the island. To learn more about Okinawa Battle Sites, visit here.

Q: What is the Facebook group “Battle Sites Okinawa” for?

Traces to the Battle of Okinawa can be found throughout the island and can still be visited today; these sites include battlefields, landmarks with bullet damage, fortifications, U.S. military bases, and even abandoned airfields. These journeys of discovery lead me to my interest to learn more about the Battle of Okinawa.

Information about some sites is limited, scattered, and quietly pushed aside or forgotten about in Japanese and English media. The purpose of Okinawa Battle Sites Facebook Page is to have a collection of sites in one source that is available to many, at the same time. We use a map to show where each site is located and update new sites and add more information if needed. 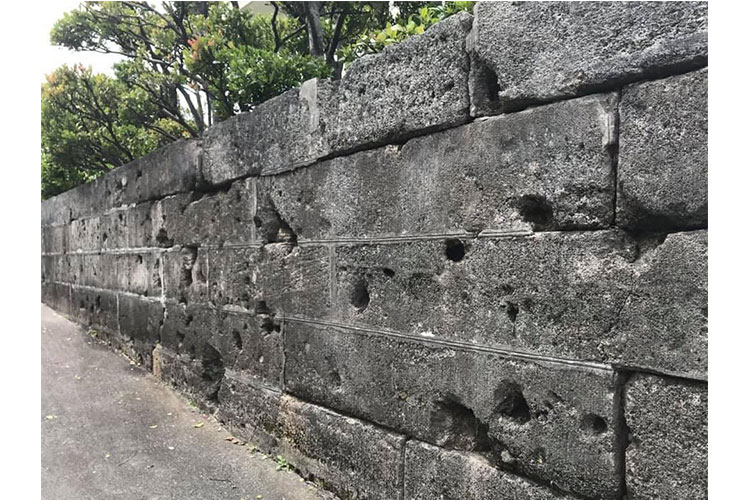 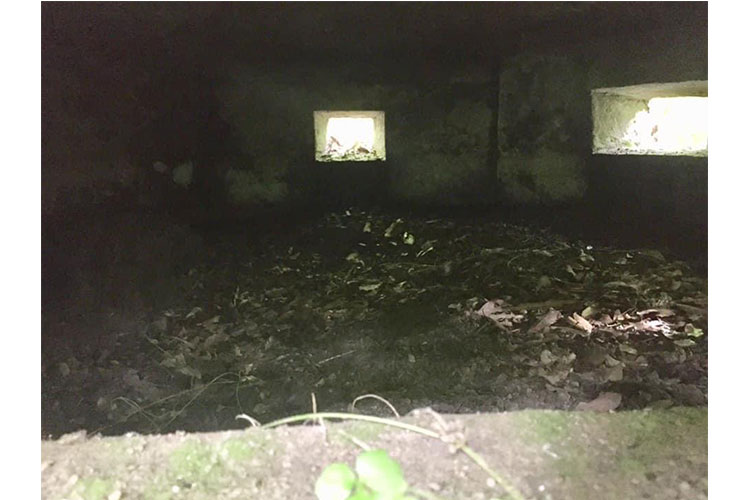 Q: Tell us about your time on the island and how you became interested in the battle sites.

My family and I lived on Okinawa from 2013 to 2019. I have a bachelor’s in criminal justice, a teaching degree in early childhood education, and a master’s in special education. History allows me to connect with an area, I was driven by curiosity especially while living on Okinawa.

Having grown up in the Philadelphia area, both my husband, Jeff Pawelski (CWO3, USMC), and I grew up learning about and visiting U.S. history and surrounding important Civil War and Revolutionary War sites. Now as parents, we’re taking our children, Hannah (12 years old) and William (10 years old), to those sites when we visit Philadelphia.

My curiosity is what drove me at first to explore the historical locations on the United States military bases throughout Okinawa. I learned of war sites off base and began venturing in town.

Around this time, an article was published in Stars and Stripes Okinawa for reader-submitted travel stories and it prompted me to write about retracing my grandfather’s footsteps back to Bise Village - Motobu, Okinawa. 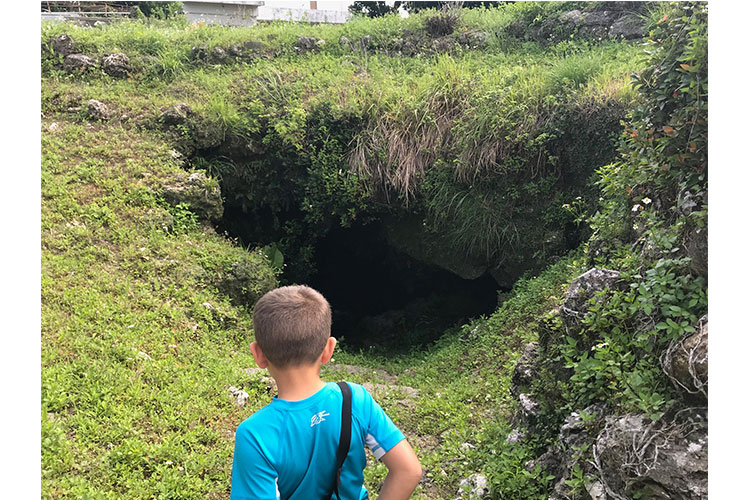 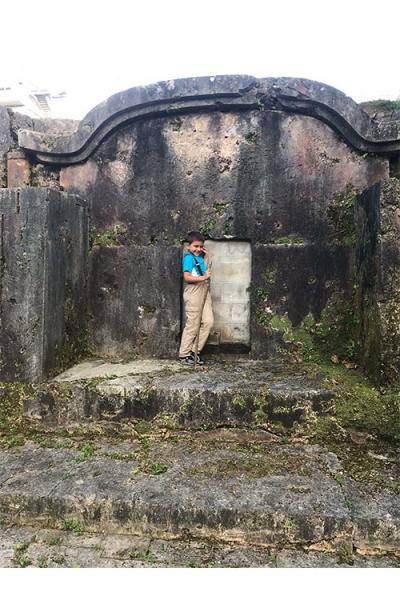 Q: When did you launch the Facebook group and what was the response?
I created the page in May 2021, after developing an urge for others to know and see the vast number of photos of battle sites and other World War II sites we’d gathered in the six years we lived on Okinawa.
Part of that also included writing a book and then realizing that a quicker and more interactive way was needed to make these sites known to others. There have been a few group members that share their experiences on Okinawa Battle Sites also! We have the same interests, but each our own stories to tell and (new) locations to share! 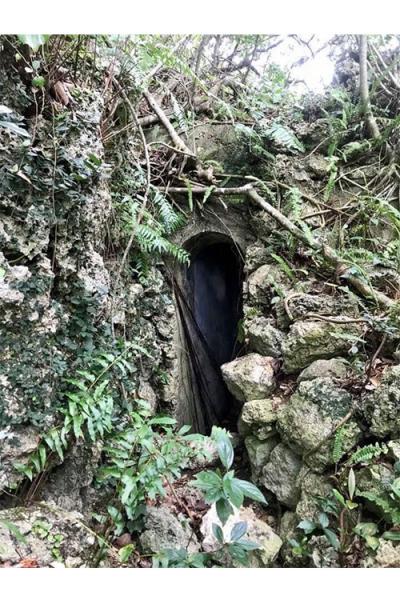 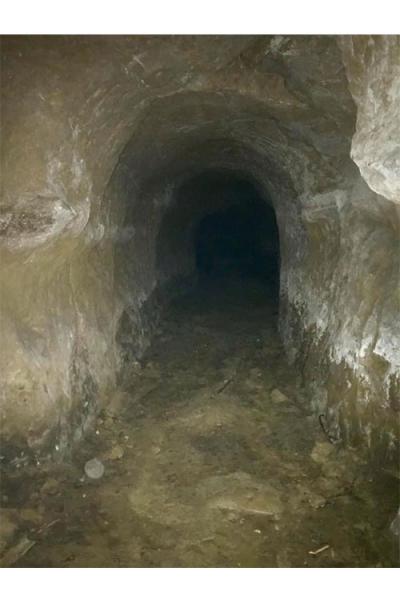 Q:  Some of the locations listed on the Battle Site Okinawa are relatively unknown. How do you find information on such sites?

This is what is so exciting! Information about these sites is in many places! I began learning about and visiting public sites that are dedicated to remembering the war. Buying the only, known, published book, in English, that lists and describes war sites on Okinawa - The 25 Best World War II Sites, Pacific Theater by Chuck Thompson (2002) - increased the places visited, but I (still) wanted to find more! I began using Okinawan and Japanese-based resources, services, and personnel to locate rarely documented sites on the island. 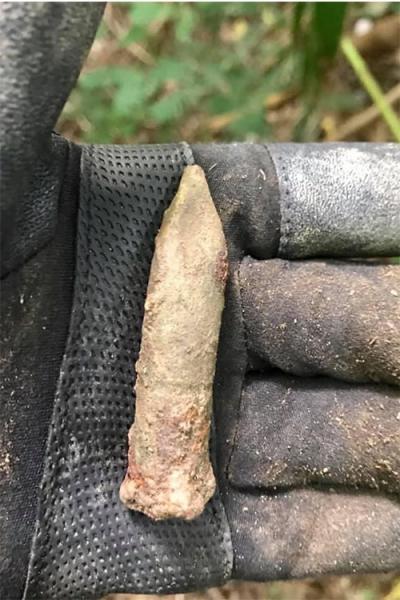 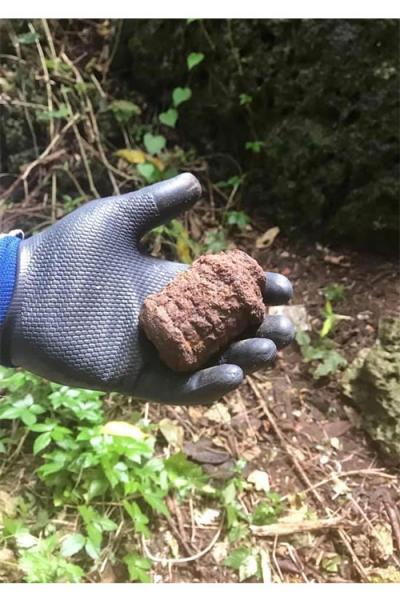 Q: Please tell us about some of the memorable battle sites that you visited in Okinawa.

Though these are not necessarily battle sites, I have had some memorable moments throughout my excursions while on Okinawa. One was finding the exact Motobu shrine where my paternal grandfather had been photographed in 1946. I carried some of his photographs with me everywhere and after months of searching, my family and I found the shrine by chance one afternoon in 2014. On a family trip to an aquarium, the GPS led my husband down a narrow road when out of the corner of my eye a cement structure caught my attention. I was certain to be experiencing déjà vu.

I carried my grandpop’s photos everywhere with me, so I was able to compare and confirm that this was the spot. These pictures of the shrine leave me speechless and I’m certain that Bise Village in Motobu, Okinawa will forever hold the spot that my grandfather and I have shared, halfway around the world and decades apart.

Another one of these experiences was finding U.S. dog tags at various locations throughout the island. I sent pictures of each tag to individuals with the same last name, through social media, and asked if this person was known, I only received one message back from Karl Kleinebreil, who currently lives in Arizona. He said “That is my uncle. I would love to have it, show it to my dad who is with me, and return it to his children. I am speechless. I am grateful. Thank you.” Karl and his family received a box of Japanese Kit Kats, origami, and, of course, his uncle’s dog tag. Since then, Karl returned the dog tag to his cousins which helped them to create a bond they hadn’t before. 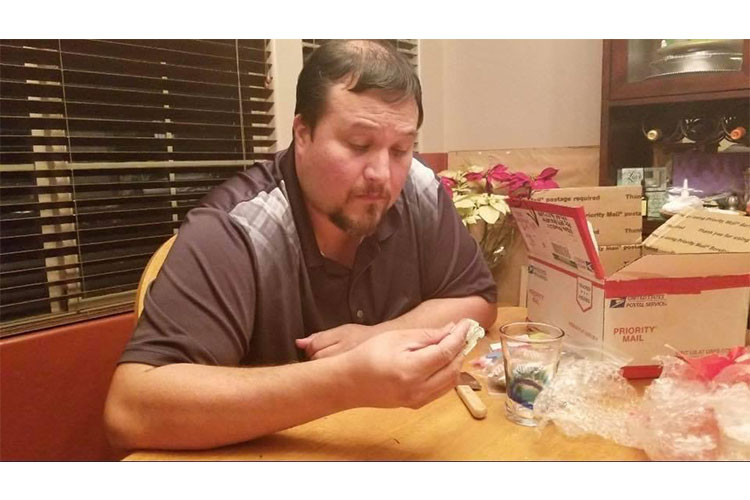 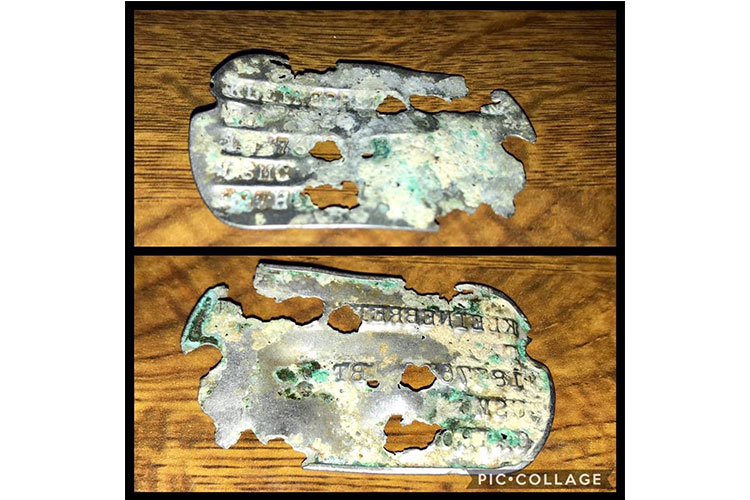 Q: Any advice for those who are planning to join the group or thinking about visiting battle sites in Okinawa?

These experiences will be BIG! You are making history come alive and will be experiencing the remains to one of the most important battles in United States history. Take advantage of it.

Be prepared:
-    Many sites are difficult to reach or can be dangerous. Proceed with caution and be aware that Okinawa is home to a variety of poisonous plants, animals, and insects.
-    Go with someone and tell others where you are. Take plenty of water. Make appropriate judgements about if a site is safe (especially for children) to visit!
-    Due to the rapid growth of foliage trails, paths, sites, and roads may appear, disappear, reappear over time. Even with GPS coordinates and directions, extra time may be needed before finding the exact site, sometimes it is hard.
-    Check with your doctor if you have any preexisting medical conditions before hiking, trekking through the jungles, climbing, and exploring. The physical impacts can be harmful, especially during the summer heat.
-    Before visiting coastal or beach sites, check the tidal predictions to determine if it is safe to visit.
Be respectful:
-    Always find legal parking. You may have to walk a way to see a site. Do not block roads, streets, alleys, and driveways.
-    We only post public sites on the Facebook page. But, as in the States, be mindful of private property and do not go on private property without permission.
-    If you come across Okinawan families at tombs or shrines, give them their space. They are celebrating their ancestors. This is an important cultural practice on Okinawa.
-    Be aware that sometimes families in Okinawa cannot afford to bury their family members, so they put remains into openings in the earth. If you come across one, please leave it be.


Q: What is unique about Okinawa’s battle sites?

Okinawa is one of the few places that have original sites that still exist and can be visited even today, after 80 years.

Only a few well-known places are beautifully maintained, so it is hard to develop a sense to how tragic the battle really was. Learning about the Battle of Okinawa, the Japanese military tactics, and the island’s terrain adds truth to these sites. 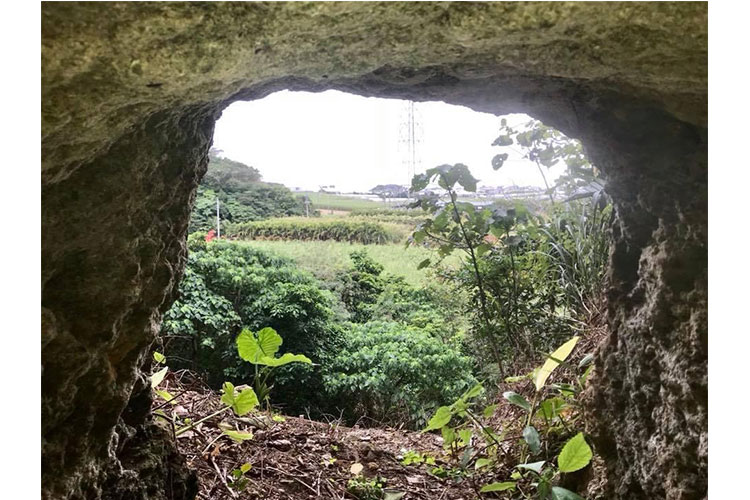 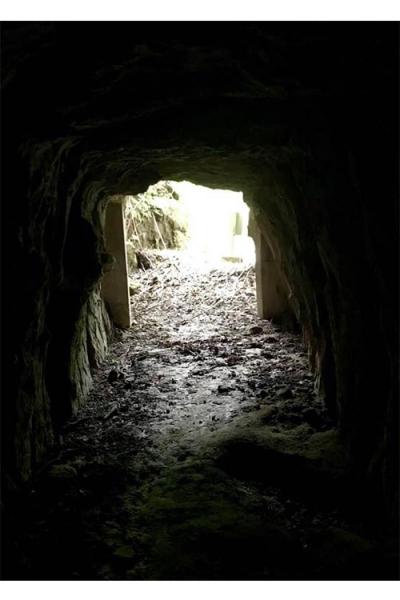 Q: If you had to recommend one or two sites for someone visiting Okinawa for one day, which would you suggest?

Because of the large variety of battle-related sites on Okinawa, choosing (only) two may be hard depending on what you are interested in, but no matter where your journey begins you will discover many magnificent sites along the way.

A few key sites worth visiting:

Former Japanese Naval Underground Headquarters in Tomigusuku. This site is 2.5 miles away from Naha Airport and has a visitor’s center and museum featuring the history of the headquarters and its massive complex of concealed, hand-carved tunnels where the Japanese Navy hid weapons and other supplies during the battle.

Peace Memorial Park in Itoman. This park is within driving distance from the Former Japanese Naval Underground Headquarters and is a beautifully maintained area with many sites relating to the tragedy of war including the Mabuni Hill and suicide cliffs, the Cornerstone of Peace memorial and the Okinawa Prefectural Peace Memorial Museum.

Brochures with maps and descriptions can be picked up at the Heiwakinen Park Information Center, Peace Memorial Park. Please visit the Peace Memorial Park website as well as the Former Japanese Naval Underground Headquarters website before visiting for current updates and COVID/ holiday changes and closures. 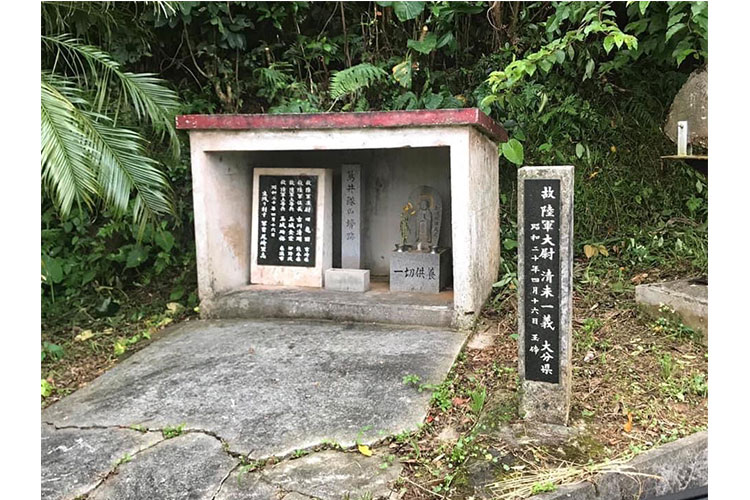 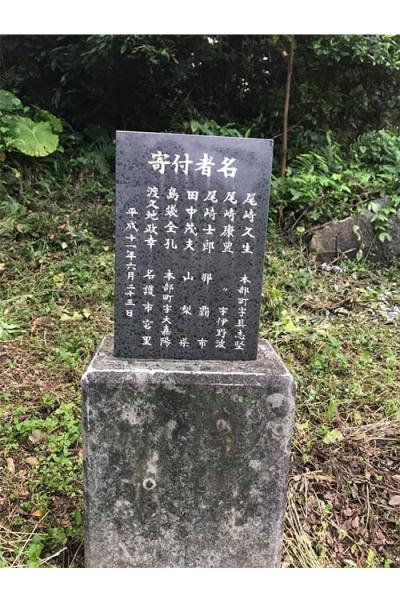 Church to honor 241,000 people who died in Battle of Okinawa by reading their names aloud