Japan is home to many tourist attractions - both natural and cultural - and as of 2018, 22 are registered as UNESCO World Heritage sites.

I have visited 16 of the 22 sites, and although I’ve seen most of the natural heritage sites, such as the breathtaking Mount Fuji and Shiretoko Peninsula, I prefer the sites filled with myths, legends, traditions and history. While strolling in Hiroshima, Miyajima and Hirado, I felt as if I was communicating with ancestors, who were telling me how they lived and what they have experienced.

Here are some of my favorite World Heritage sites. Explore one or more, and you surely will encounter a unique attraction that you have never experienced before. 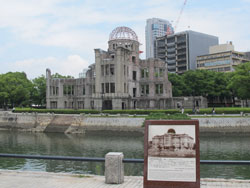 Hiroshima is the first city in human history to suffer atomic devastation.

On Aug. 6, 1945, a four-ton bomb code-named Little Boy exploded above the center of the Hiroshima City that wiped out most of the city and killed more than 140,000 people.

Registered as a World Heritage site, Genbaku Dome is the only structural ruin of the atomic devastation that was left standing. It was originally built as a Prefectural Industrial Promotion Hall in 1915. Miraculously, the hall did not completely collapse during the bombing, despite being located near impact point of the bomb. The half-shattered structure has remained untouched since the bombing.

When I saw the dome, I couldn’t help but shudder learning what the A-bomb actually did to the city and locals. Today, the ruined dome stands calmly aside a beautiful blue river, which only me remind of the devastation that locals must have met at the moment.

Don’t miss the Peace Memorial Museum nearby the Dome. The exhibits range from a model of the bomb and maps and pictures of the devastated city, to charred fragments of clothing and melted tiles. The most shocking display for me was the so-called Human Shadow Etched in Stone. It was a stone with a black shadow. According to the description, the stone was found 853 feet away from the blast point. A person sitting on the stone was exposed directly to the atomic flash. The victim is presumed to have been consumed on the spot by a 12,632-degree Fahrenheit atomic fireball, and only the shadow remained. 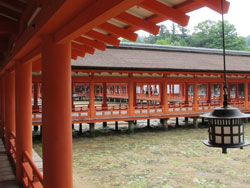 More than 4 million tourists a year make their way to the majestic Itsukushima Shrine and its large torii gate built on the shore of the island.

Although most of the shrine is closed to the public, you can walk around its main deck, along the main altar and noh performance stage. And, when it is low tide, you can walk along the sea floor right up to the gate for a close look. It is amazing that such this gigantic gate stands firmly by its own weight and four supporting pillars.

According to legend, because the Island had been worshiped as a god for centuries, the shrine could not be erected on the island. And to this day, there are no cemeteries on the island because no one is allowed to die there. Nor are folks allowed to be born there. When either time comes, it must be done on the mainland. 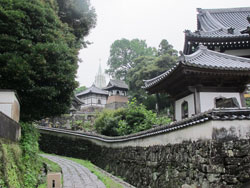 The exotic look created by traditional Japanese homes shadowed by gothic-style cathedrals and a Dutch trading post with stone port facilities, makes Hirado a great attraction on the western island of Kyushu. Fortunately, Hirado is only a 40- to 50-minute drive along Route 22 from Sasebo Naval Base.

This island is known as one of the Hidden Christians’ homes and sanctuaries, and was recently registered as World Heritage.

Walking up a sloping stone path to the Hirado Church, I encountered a very impressive view of the spire and cross of another Catholic church in combination with the traditional Japanese tiled roofs and grave stones of Komyoji and Zuionji temples. This really symbolized how much this island merged Japanese and Western cultures.

Since the Portuguese Jesuit missionary Francis Xavier introduced Catholicism to Hirado in 1550, the new faith soon took root on Hirado Island’s western coast and Ikitsuki Island. But by 1614, the Tokugawa Shogunate outlawed Christianity before closing the country to foreigners, especially Westerners, in 1641.

The crackdown on the foreign faith from the West was brutal. It’s estimated that more than 40,000 Christians were martyred in Japan until the ban was lifted in 1873. When Christians were discovered in Hirado, they were usually executed on the Neshiko Beach and their bodies disposed of in nearby Ushiwaki Forest.

To survive, Hirado’s Christian communities went underground, pretending to be Buddhists in public. They hid their religious icons, paper crosses and medallions in storage cabinets, continuing to venerate them in secret. 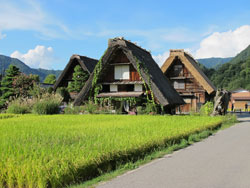 Located on the hilly valley in the central part of northern Japan, the inverse V-shaped farmhouses in Gokayama and Shirakawago regions look like two hands being placed together as if praying. In Japanese, it is called “Gassho-dukuri” (hands-in-prayers style). Since UNESCO declared the regions as World Heritage Sites in 1995, millions of domestic and international tourists have traveled to see the pristine rural landscape every year.

Some of the farmhouses are used as restaurants, souvenir shops and inns, and a folklore museum housed in a traditional farmhouse offers you a chance to take a closer look at the inside, outside and architectural structure of the buildings.

Travel around the regions, and you will be overwhelmed with its unique rural landscape of traditional farmhouses with steep-angled roofs and a backdrop full of stunningly beautiful nature. 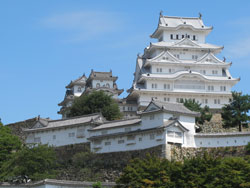 Anyone wishing to experience an air of Japan’s traditional and elegant past should consider visiting Himeji in Hyogo Prefecture. A three-and-a-half-hour drive from MCAS Iwakuni brings you to this quiet, calm and conservative city that harkens back to its old-world roots. The streets are filled with old-fashioned eateries and clothing stores as well as countless souvenir shops catering to tourists drawn to the 400-year-old Himeji Castle. The castle is one of a very few to have remained standing after World War II. There are many volunteer guides on hand, some that speak English. In addition to the historic landmark, Himeji offers visitors a classic Japanese garden, Koko-en, and a decent zoo. In all, Himeji not only impress you with the majesty and elegance of traditional Japan, it will give you new memories that will last a lifetime.