My Paradise: Find yourself at Okinawa's Lost Beach

My Paradise: Find yourself at Okinawa's Lost Beach

The Lost Beach is located in the northern part of the island on the East Coast. It is just south of Hedo Point and is a very remote stretch of beach. You won't find many roads that lead to it or well-worn trails. The only other people we saw out this far were local fishermen taking advantage of fishing during low tide.

Since The Lost Beach is so remote you'll want to make sure that you are prepared for this hike. A comfortable pair of hiking shoes that you don't mind getting wet will help on the rocks, but we made it work with sandals and flip flops. My personal favorite shoes for this type of hike are Luna Sandals. You'll also want enough water for each person for at least 4 hours of exploring. You won't find any vending machines or convenience stores within 20 minutes of this part of the island so pack whatever food or medical supplies you might need. I never go on a hike without a fully charged phone and camera battery either! Sun protection is always a good idea too, since there isn't much shade along the coast. 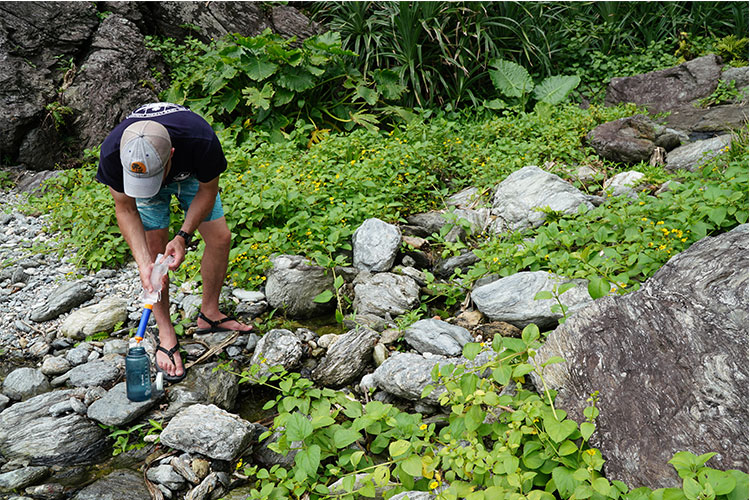 This water filter came in handy!

There are two places you can start this hike. We started from Oku Beach and hiked north, but you can also start from this parking area near the Okinawa Rail Observation Deck and hike south. The road down to Oku Beach is a narrow switchback. Take it slow since lots of people use this road to access the parking area at the end for fishing. Once you park at Oku Beach and start the hike out it is about 1.5 miles to the Triangle Tunnel. We originally were just aiming to make it to The Shrine Ruins of Lost Beach but, once you make it that far, the beach opens up to a huge and beautiful section of coast line that was so much fun to explore! 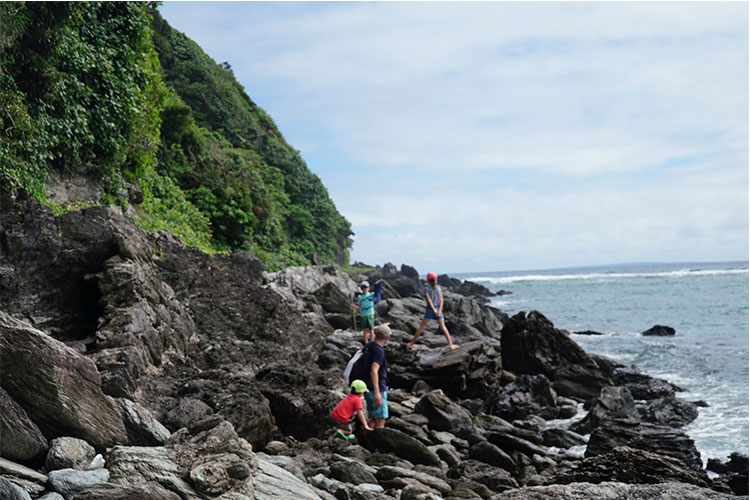 We timed the hike to start in the morning when the tide was going out. I would really recommend this, especially if you have kids. When you make the return hike you will be able to walk back through the tide pools. Once you leave Oku Beach and continue north along the coast it is a very rocky hike. We slowly scrambled up and down huge boulders with our kids ages, 10, 8, and 4. We often had to tell our two older kids to slow down and wait. This was the hardest and slowest part of the hike.

Just before you reach The Shrine Ruins of Lost Beach there is a rope for scaling down the largest boulder. My two older kids and husband gladly chose the rope while I waded through waist-deep water with my youngest son. I'm not a lover of heights but my kids loved the rope and wanted to do it again!

As you round the corner after the rope portion of the hike, you will begin to see the ruins. To put it lightly, they definitely look like ruins. My kids were a little disappointed while I was intrigued thinking about the history of the old shrine. There is not much left of it except a lot of fallen wood and the outline of the old structure. I haven't been able to find any information about it, but would guess that the large wooden supports were hand hewn.

After the shrine ruins, you will see the remainder of a bridge from an old road that once hugged this part of the coastline. You can still see a large portion of the bridge, and after heavy rains, there is a river that runs under it. It is an old culvert that would have allowed the water to flow under the road. The stone bridge is beautiful and is pieced together in a herringbone pattern.

After the shrine and the bridge, the coastline opens up into one of the widest and largest sections of beach I have seen on Okinawa! By this point in the hike the tide was out, so the kids had more beach to explore than they knew what to do with. We could have stayed and explored in this area all day long. It was on this section of the beach that we saw the sea turtle tracks and nests, it was truly incredible to stumble upon. We had seen sea turtle nests on the beaches up north before but never the sea turtle tracks! 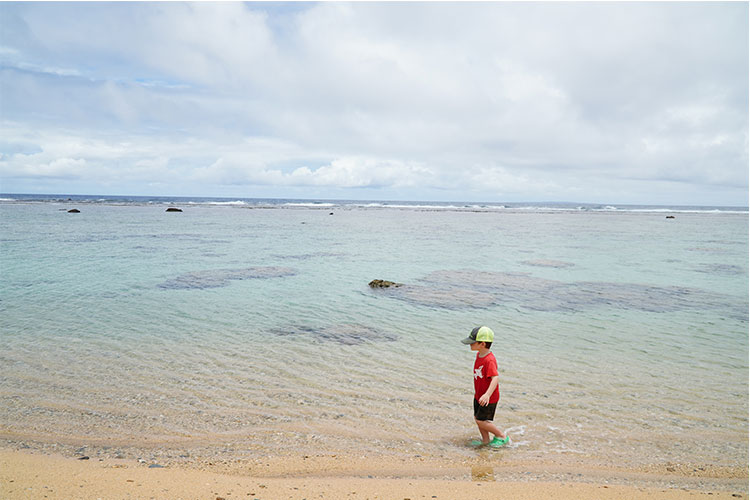 Sadly we also saw the most trash on the beaches here. There was a bit of everything including the largest buoy I've ever seen, old beach towels, thousands of pieces of plastic, and enough old boots to make several matching pairs. It was a bittersweet moment where I was ecstatic and in disbelief that I got to photograph sea turtle tracks leading to their nests while sadly taking in the state of the beach. The majority of the trash was not intentionally left by visitors but it was depressing to see what what new obstacles washed up only to have sea turtles navigate over them to lay their nest. One might assume there are no beach clean-ups due to the difficult-to-reach nature of this beach.

On the return hike, the tide was low enough that we didn't have to scramble over the huge boulders. We were able to wade through the water all the way back to Oku Beach. We gingerly walked through tide pools, amazed at the sea life we were seeing. We saw all of the "usual suspects" including brittle sea stars, sea cucumbers and sea urchins. But we also saw some creatures that we had only seen pictures of before! We saw a juvenile sea snake slithering through the tide pools and we saw several nudibranchs clinging to the side of coral. The highlight of the tidepools was seeing an octopus quickly swim away and squirt ink. It was all an amazing science lesson and gave us lots of things to research when we got home.

As with most things in Okinawa, I often wonder about the history behind the area. Thankfully I am part of a Facebook group called "Hike Okinawa" and it is run by the very knowledgable Rob Oechsle. Rob has also hiked The Lost Beach and shared what he knows about the old road and history behind this part of Okinawa. In his post Rob shares the following information:

"For almost 3 years from 1941 to 1944, a thousand Okinawans labored to build a two-lane ‘super highway’ between Hedo Point and the Village of Oku. Besides massive retaining walls along the whole length, 10 concrete arch-bridges were constructed over small springs, creeks, and washes. In the middle of the long stretch of road was The Triangle Tunnel, about 7 meters wide at the base, blasted through solid rock. The road is now gone but here and there along the way you will catch bits and pieces of the road they once built."

Our hike along The Lost Beach was not one we will quickly forget! 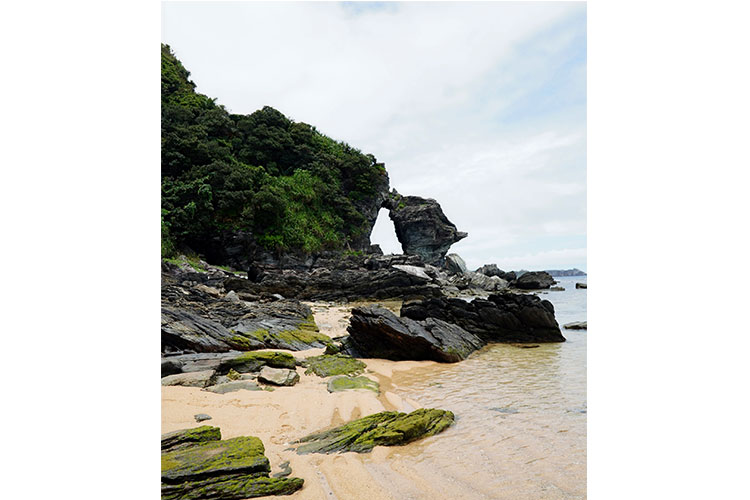 Looking for weekend fun on Okinawa? head to Torii Beach!