Hunting history in a new place is my idea of paradise. The thrill of seeing something amazing for the first time and going a long way to do so is exciting. So, in the dead of winter, my wife and I went to Hokkaido for a week of non-stop discovery, crossing the island and its national park-like interior to learn about how the north was won.

Hokkaido was Japan’s last domestic frontier. Previously known as Ezo, Japan claimed the island for centuries but it wasn’t until the early 1870s that pioneers, willing and unwilling, were sent northward to settle. Like the American West, it was a wilderness rich in natural resources and unique possibilities, and sparsely populated by a native people who would be marginalized as progress advanced. Though tamed now, elements of that old Hokkaido have been preserved and can be seen if you know where to go. 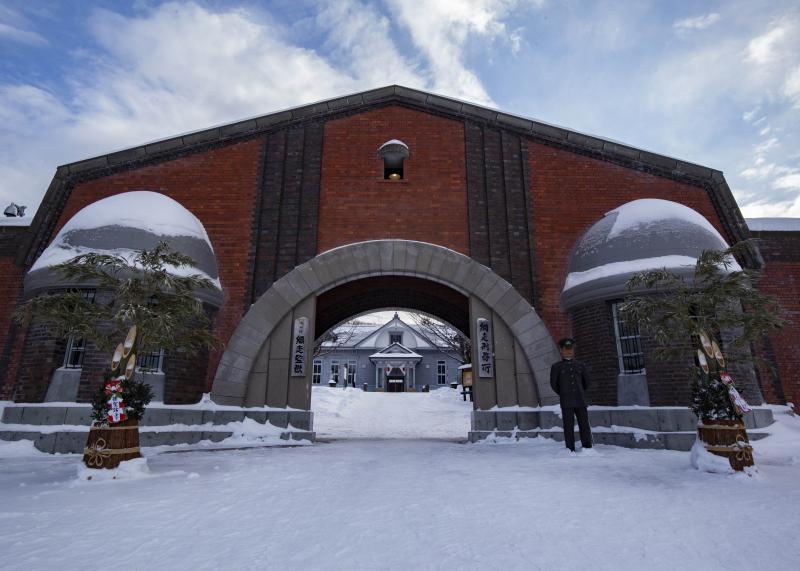 On Hokkaido’s northern coast is a once remote town that was home to one of the nation’s most dreaded prisons, Abashiri. This prison’s population was imported north as part of a scheme to cheaply and quickly build Hokkaido’s highways and infrastructure with an expendable workforce. When it was decommissioned the old prison became an open-air museum.

Beyond its foreboding red brick gate is the functional walled village that was Abashiri Prison. As an isolated prison in an inhospitable country, Abashiri was entirely self-sufficient, able to be cut off from the outside world almost indefinitely. It has a farm complex, workshops for metal working, storehouses, a prayer hall, bathhouse and living quarters for guards and their families. All of these facilities, most of which are original with a few reproductions to fill in gaps, are present and all spaces furnished and equipped with prisoner and guard mannequins giving Abashiri a “live” feeling that illustrated what it was like not so long ago.

The centerpiece of this village is the radial five-wing prison house built in 1912. Its rows upon rows of gloomy cells lining long, narrow halls illuminated by sky lights gave an impression of oppressive orderliness.

Quiet today, Otaru once played an important role in the development of Hokkaido. At its peak in the early 20th century, this was the Wall Street of the North. Its former prosperity still shows in the rows of old warehouses standing shoulder to shoulder on the canal, the banks clustered in city blocks and a tight row of Victorian businesses on Sakaimachi that are still illuminated by gas lamp-style street lights which when the sun goes down gives the streets a Dickensian Christmas atmosphere.

Otaru itself is its own biggest attraction thanks to this heavy concentration of late 19th and early 20th century architecture. It’s easy to imagine it as it was a century ago when there were more sleds on the streets than cars. After arriving, we found more museums than we could handle in 24 hours and had to decide what to see; though we put that off until after a romantic canal walk.

Two must-see museums are the Otaru Canal Museum to learn about Otaru’s development and the Otaru City Museum, which is more of a train museum than a city one. Its centerpiece is an American locomotive from the 1880s.

For a night out, we visited the Otaru Beer Hall to imbibe locally-brewed German beer that’s the best I’ve had outside of Germany. The exterior is an old warehouse but inside is pure Munich beer hall with everything except lederhosen.

Hidden in the trees just outside Sapporo is a frontier town surrounded by farms and a fishing village. These 52 buildings are not a functioning town but rather an architectural open-air museum telling the story of Hokkaido’s pioneering past: Kaitaku no Mura, the Historic Village of Hokkaido.

When Japan was developing the island they brought in American advisors whose advice turned Hokkaido into a Japanese American Midwest complete with dairy farming, raising cattle for beef and brewing beer – industries that were almost non-existent anywhere else in Japan. They also came armed with plans for American architecture that could withstand the brutal winters far better than most Japanese designs.

Kaitaku no Mura is the physical remains of this Americanized Hokkaido. Laid out along a broad tree-lined boulevard are government offices and housing ripped straight from Ohio and Illinois along with hybridized Japanese personal businesses, homes and an inn with farms just beyond the town’s edge. The variety of buildings also makes it feel like an actual town that’s always been here, if only reduced in scale.

As pretty as these exteriors are, what makes Kaitaku no Mura come alive is inside every building. Homes and shops are furnished with period furniture, equipment and small items so that it feels as though the owner will return any minute or that the shop clerk will be with you shortly.

Sapporo is a modern city but has a few historic highlights from its pioneering days, the Sapporo Beer Museum, Akarenga government building, Hoheikan and, Japan’s most disappointing tourist attraction, the Sapporo Tokeidai (Clock Tower).

Since the Sapporo Beer Museum is a corporation’s museum, I expected the visit to the old red brick brewery to be a boozy exercise in brand communication, but was pleasantly surprised to learn a lot about the early history of Hokkaido as the beer, originally a government enterprise, was part of the island’s development. The museum can be toured for free, but the 500 yen premium guided tour is the only way to go because it comes with a glass of the original 1876 recipe lager, which is not sold anywhere and only served on this tour. Yes, you can get drunk on history here!

The Tokeidai is a victim of expectation and lack of context. It may be dwarfed by surrounding skyscrapers and its peaceful atmosphere assaulted by the constant sound of traffic, but the little clock tower hall is an artistic structure that still serves the former frontier community that grew up around it. With its lacy trim and colorful red and white late Meiji era (1868-1912) paint, it’s a very striking hall amid drab mountains of modern steel and glass.

Like most Hokkaido government buildings of its era, the clock tower hall an American design and could be any New England church, chapel or barn, which makes it one-of-a-kind in Japan. The Kaitakushi (Hokkaido Development Office) red Pole Star patriotically adorns every corner and like in the other former government-funded enterprises is a consistent motif.

The Akarenga (Red Brick) Government Office Building looks like a luxurious mansion set in an evergreen park near Sapporo Station. Red bricks, green dome and white snow, it’s at its visual best in winter. Inside is a collection of free mini-museums, each room dedicated to a different aspect of Hokkaido history and ongoing issues.

Hoheikan is an elegant baby blue hotel built in 1881 for dignitaries and visiting high-level government employees; it was finished none too soon as its first visitor would be Emperor Meiji on his first and only visit to Sapporo. I don’t believe he found it disagreeable. No expense was spared in its construction and though it may not have wowed in New York or London, it would have impressed in the American West. Artifacts from imperial visits, such as the bowl used to wash both Emperor Meiji and Taisho’s own dragon countenances, are on display.

Hokkaido’s second biggest city was a military town, home of the Imperial Japanese Army’s 7th Division. The Hokuchin, as they were called, fought in some of the Russo-Japanese War’s bloodiest battles and during World War II detachments fought at Nomonhan, Guadalcanal and Attu.

The Japan Ground Self-Defense Force Hokuchin Kinenkan follows their story from the first soldier-farmers that pioneered Hokkaido to the end of World War II and today’s JGSDF.

The museum displays 2,500 artifacts which, more than remembering just the wars and battles, covers their complete history including peacetime activities and unit evolution over time. It doesn’t come across as glorifying war but remembering generations of Hokkaido’s soldiers and their accomplishments. For military buffs this is probably the most complete collection of photographable Japanese militaria you will ever see.

As Hokkaido developed, the native Ainu people were constantly forced to change and adopt Japanese culture.  Fearing that their culture would be lost, the Kawamura Kaneto Ainu Museum was established. It’s a place that focuses less on history and more on sharing the traditional Ainu way of life through artifacts, like clothing, tools and art which makes the museum visually engaging and memorable. There’s an inborn artistry in the culture, the clothing is eye-catchingly colorful and ornate and they seem to carve little designs in almost any wooden items they used.

More than snow
Thoughts of Hokkaido and Sapporo may conjure up snow sculptures and freezing temperatures, there is much more to experience in Japan’s final frontier. Easily accessible from the mainland and Okinawa, it is a cool escape for a different landscape and historical perspective of Japan.

A guide to solo hiking in Japan