My Paradise: Riding the waves and hitting the slopes in Japan

My Paradise: Riding the waves and hitting the slopes in Japan

The military can be a great travel agency. My family has been stationed overseas for the last 9 years, first to Hawaii, then Germany, and now, Japan.  In Hawaii, I learned how to surf. I took up snowboarding in the Alps. Both these sports are super fun and addicting, but it is rare to find a place where both surfing and snowboarding are possible. That would require a place with snowy mountains and a beach with waves close to one another. Well, Japan just happens to be such a place!  In fact, surfing and snowboarding in Japan is some of the best in the world!

Northwest of Tokyo, snow abounds. Japan’s snow is fresh, soft and powdery, giving a floaty feeling. Also known as “Japow,” it is not uncommon for a whole meter to accumulate overnight, making it very interesting on the slopes. Skis often sink deep into the snow, causing skiers to be stuck. However, snowboards have a higher surface area, keeping them afloat. For a snowboarder, especially one like me who specializes in freeriding, Japow is the best kind of snow. Freeriding is snowboarding ungroomed slopes, making use of natural terrain features.

Freeriding is often really dangerous as snowboarders must hike outside of ski resort bounds, where there is no ski patrol and slopes are not checked for avalanche danger. In Japan, however, there is the possibility to enjoy freeriding inside the bounds of ski resorts. Not only is it safer, but it is also easier because a long hike is unnecessary. Japan’s freeriding has been featured on the Freeride World Tour at Hakuba, and in qualifying events at Lotte Arai, Niigata.

My favorite place to snowboard is Tanigawadake Tenjindaira in Gunma. It is a very uncrowded ski resort, so much so that I’m surprised they even stay in business. It also has amazing Japow, and the ski resort owners make no effort to groom it into hard pack for skiers, keeping it nice and powdery for freeride snowboarding.  The lack of crowds and the abundance of Japow simulates an untouched, pristine, natural alpine environment, though it is in fact within a ski resort, where all slopes are inspected daily for avalanche danger and treacherous slopes are closed off. My paradise is snowboarding deep, untouched Japow, without avalanche danger.

Snowboarding in Japan is not possible year-round. However, in the summer and fall, the water around Japan is warm enough to surf. On any given day, it is usually possible for me to either have an amazing surf session, or day on the mountain. The snow season at my favorite mountain starts in December, and great Japow falls well into April. Surfing is usually best from May to November. For starters, the water is warm enough then, but it is also when offshore typhoons bring big waves. (Note: Typhoons that actually hit Japan aren’t just destructive, they also bring strong onshore winds which make the waves too choppy). 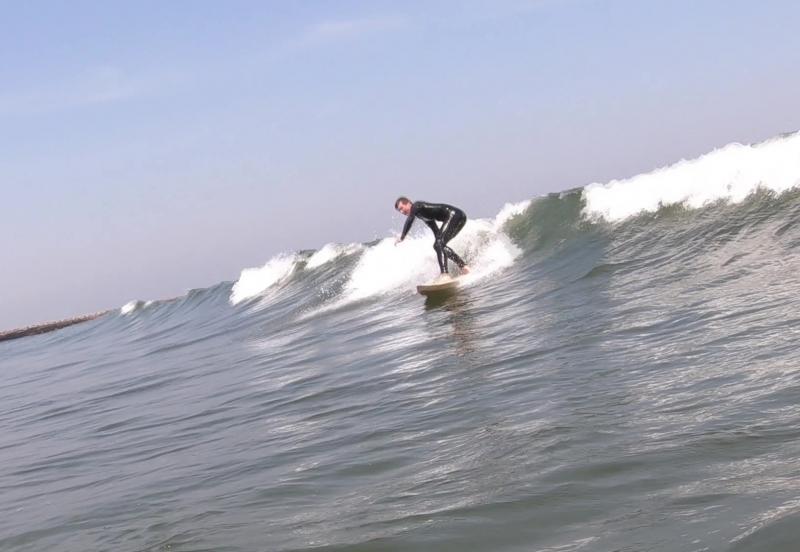 To Tokyo’s northeast, there are numerous beaches, many of which have great surf breaks. For example, the first-ever surfing event in the Olympics will be held next year at Shidashita Beach in Chiba. Chiba is close to Tokyo, so even though the water is warmer, it is more crowded. That is why I prefer to surf further to the northeast in Ibaraki.  The water temperature in Ibaraki from May to November fluctuates from the low 60s to the mid 70s. Except in the warmest weeks of August, a 2/3 mm wetsuit is required, and for some of the season, a 4/3 mm is necessary.  Wetsuits have greatly improved recently, and I do not notice much of a difference when paddling my surfboard with my 4/3 mm wetsuit or without one.

Because of the colder water temperatures where I surf, my family and I are sometimes the only people in the water. Even on good typhoon days in the height of summer, there are only around 10 other people. In a tropical place like Hawaii, there can be up to a hundred people battling for a single wave. In Ibaraki, I can get unlimited waves all to myself. Though Japan’s waves may be significantly smaller than those of Hawaii’s North Shore, I am not a professional, only surfing waves less than 10 feet anyway. My paradise is surfing 5-foot waves in Ibaraki at a place shared only with my family and a couple of friendly Japanese surfers. An offshore typhoon bringing in 8-foot waves every once in a while? An added bonus.

Where exactly is Tanigawadake Tenjindaira (Japow mountain)?  What about the place I surf in Ibaraki?  Well, Tanigawadake Ropeway is located in Gunma Prefecture, a mere 2-hour drive from Yokota Air Base, and my surf spot is near AquaWorld Oarai, Ibaraki, also 2 hours away.  My family enjoys snow sports and surfing almost as much as I do, and we have a snow or surf day almost every weekend. That is what really makes my paradise awesome, experiencing it with my family.