Taiwan is a stunning island paradise not to be missed during your Pacific assignment. 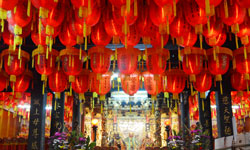 Taoyuan International Airport is a little over 2.5 hours from Seoul or 3 hours from Tokyo, making it an attractive weekend destination for those stationed in Korea and Japan. Taiwan High Speed Rail (THSR), based on the 700-series Japanese shinkansen, runs along the west coast of Taiwan and connects the capital Taipei to the southern city of Kaohsiung (217 miles) in as little as 1.5 hours.

A colony of Japan from 1895 to 1945, Taiwan’s infrastructure was largely built by the Japanese, and you’ll find a plethora of preserved colonial buildings scattered around Taiwan, including Taichung Railway Station from 1917, the fascinating hot springs museum at Beitou, Hinoki Village in Chiayi, and Pine Garden in Hualien (a former administrative office of the Imperial Japanese Navy).

Taiwan’s official languages include Mandarin Chinese (Taiwan writes with traditional Chinese, which looks similar to Japanese kanji) and Taiwanese Hokkien, although you will also find a large number of English speakers (and many young Taiwanese are learning Japanese for tourism and hospitality, making it an attractive destination for Japanese tourists as well). 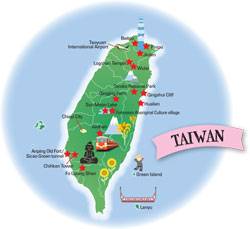 If you are short on time, Taipei makes a fantastic home base for exploring some of the island’s most diverse attractions, from powerful waterfalls to old-time railway towns like Pingxi (famous for its lantern festival in conjunction with Chinese New Year) and mining towns like Jiufen, whose otherworldly lantern-lit ambiance inspired a great deal of the aesthetics in director Hayao Miyazaki’s awardwinning “Spirited Away.”

Other nearby attractions include Wulai, with its hot springs, waterfalls and indigenous Atayal crafts and restaurants, and the impressive waterfall at Shifen. Many of these cities are quite small, so you may be better off renting a car (Taiwan drives on the right) and exploring these as day trips. Be sure to bring motion sickness medicine as driving between them involves numerous hairpin curves and switchbacks.

Eastern Taiwan offers some of the island’s most stunning scenery, including Taroko National Park. The park’s steep canyons, gorges, and waterfalls are a hiker’s paradise. One of the best ways to discover it is to rent a car and drive down the Eastern coast. Notable points of interest include Qingshui Cliffs, Taroko Gorge, Qixingtan, and Mugua River Gorge. 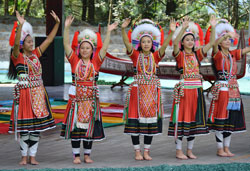 Alishan in Chiayi County is one of Taiwan’s top attractions: you can ride the narrow-gauge Alishan Forest Railway (originally built by the Japanese for logging in 1912), see the sun rise over a sea of clouds (this involves a super-early wake-up call), hike through sacred forests, and visit tea plantations (due to the high altitude, some of Taiwan’s most prized teas are grown here).

For the adventurous, remote Lanyu/Orchid Island (40 miles off the southeast corner of Taiwan near Kenting) can be reached by plane or boat. A scuba diving paradise, Orchid Island is home to the Tao tribe and their incredible carved wooden canoes and unique semi-underground homes (the Tao community values their privacy; please be respectful about photographing them). Green Island (20.5 miles east of Taitung) offers some of Taiwan’s best reef snorkeling, Lyudao Lighthouse, and breathtaking coastal scenery. 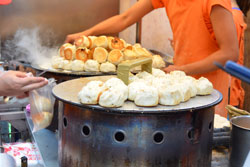 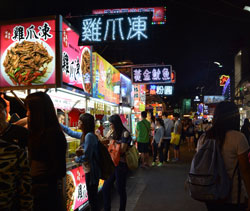 You may be familiar with Japan’s highly refined tea ceremony, but did you know that Taiwan has an equally refined tea culture? Dating back to the 18th century, the Gongfu tea ceremony likely originated in Fujian and Chaoshan in China’s Guangdong province. You can experience Taiwan’s famed tea plantations and a series of atmospheric teahouses perched high over the hills surrounding Taipei in Maokong; a short cable car ride up the mountain will transport you to a different world. Try a tea flight sampler paired with traditional Taiwanese tea cuisine (for best ambiance, visit shortly before sunset and continue sipping as the lights of Taipei illuminate the valley below). Bubble tea was invented in Taichung in the 1980s at Chun Sui Tang (there are also branches in Japan) and has taken the world by storm. Another refreshing choice is watermelon juice, the perfect antidote to Taiwan’s oppressively hot, humid summers.

Taiwan’s most unique (and dangerous!) festival that coincides with Chinese New Year features thousands of high-powered bottle rockets fired directly at participants… who should come prepared with safety gear including motorcycle helmets, flame-retardant clothing, gloves, and hearing protection. Go at your own risk!!

Held in the small mining village of Shifen in February, thousands of paper lanterns float up into the night sky emblazoned with dreams and wishes for the new year. (IACE offers affordable package tours.)

Q and A with a travel junkie

Editor’s Note: Sarah Hodge is a language instructor stationed at Yokosuka Naval Base in Japan. Since her arrival in 2015, she has done her best get out and explore. Hodge, who has written several stories that have appeared in our community papers, was kind enough to sit down with Stars and Stripes and share her thoughts on making the most of your time overseas. 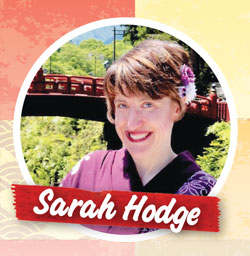 Q. You’ve been stationed at Yokosuka Naval Base since 2015 and have really seemed to make the most of your time in Japan. You’ve really immersed yourself in the culture, haven’t you?

A. Absolutely! I was previously stationed at a Japan Air Self-Defense Force Base in Central Japan in 2010-2011 but have been interested in Japanese culture and language since childhood. Shortly before PCSing in 2015, I started joining a multitude of travel and culture groups online to do preliminary research – I am currently admin of a number of Japanese travel, gardening, and cooking groups and an active member of many others. I have participated in a number of cultural events like kimono dressing, tea ceremony, zazen (Zen meditation), Japanese archery, traditional crafts, and Japanese cooking classes.

I have many friends who are Zen/Buddhist priests all over Japan, and this year I am assisting with ZEN 2.0 in Kamakura, a global mindfulness forum hosted at Kenchoji (the oldest Zen training monastery in Japan established in 1253).

In addition, I’ve been involved with supporting and promoting Japanese men’s rhythmic gymnastics since 2017 (I have dozens of coach, athlete, and parent friends across Japan) and assist with English subtitles for MRG videos and gymnastics blog posts in English.

Q. What’s your favorite thing to do in Japan?

A. Experiencing local culture – often this means visiting local temples and participating in unique regional festivals. I love to participate in hands-on cooking and craft classes and try to sign up for a unique experience on every trip. So far, that’s included indigo dyeing in Ome, making Kamakura-bori chopsticks and pottery with local artisans in Kamakura, and hand-blowing Edo glass windchimes.

I also love onsens (hot springs), collecting goshuin (temple and shrine seals – I currently have around 9 books in various stages of completion) and Japanese pilgrimages. In 2017, I stayed at two different temples on Koyasan, and in 2018, I visited Kumano Kodo in Wakayama. In 2020, I hope to walk at least part of the 88-temple pilgrimage in Shikoku.

And there is something deeply powerful about Japan’s ancient cedar forests and waterfalls, so I make it a point to visit as many as I can. So far, this has included Kumano Kodo’s Nakahechi Route, Oirase Stream in Aomori, Kegon, Ryuzu, and Yutaki Falls in Nikko, Shiraito Falls in Shizuoka, and Nachi Falls in Wakayama.

Q. What’s your favorite place outside Japan and why? 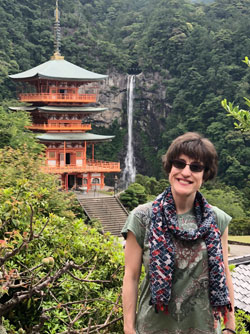 A. In 2015, I worked in Taichung (Central Taiwan) for six months and had the opportunity to travel extensively around Taiwan, including Taipei (Wulai Falls, Shifen, Jiufen, Pingxi), Tainan, Chiayi, Sun Moon Lake, Cingqing Farm, Kaohsiung/Fo Guang Shan, Alishan, and Hualien/Taroko National Park. I immediately fell in love with Taiwan’s gorgeous scenery and abundant nature, food scene (I visited many night markets and took six cooking classes around Taiwan), and its warm and gracious people.

Over the last several years, my travel has been limited to Japan, but I spent three magical weeks exploring Croatia, Slovenia, Bosnia and Montenegro in 2017 and highly recommend this gorgeous region!

Q. You’re a definite travel junkie. What advice would you give folks just beginning their tour in the Pacific?

A. Don’t be afraid to simply hop on a bus or train, hop off at a random (or interesting) destination, and simply get out and explore. All station staff speak some English, most major station/bus signs are in English and Japanese, and many towns now have a dedicated tourism information office in or near the train station (most have staff that can speak some English; all should have at least one map or guide available in English). In addition, there are several excellent smartphone apps in English with detailed sightseeing and transportation information.

Another fantastic option to make new friends and really experience local culture is signing up for tours and volunteer guides through Systemized Goodwill Guides (https://www.japan.travel/en/plan/list-of-volunteer-guides/). I have signed up for numerous guides and events in Kamakura, Matsue, Nagano, Kanazawa, and Nikko and can’t recommend them highly enough – the majority are retired volunteers who are thrilled and honored to share their local hometown and culture with you. I always bring small local souvenirs from Yokosuka to present my guides with at the end of our time together.

Plan for major festivals and events well in advance. Popular events like Aomori’s Nebuta Matsuri, Kochi’s Yosakoi Festival and Hirosaki’s Cherry Blossom Festival mean that hotels can sell out a year in advance; if there is a unique regional event you have your heart set on, research and make reservations as far in advance as possible. Hotels may also have special rules/rates for these festivals.

For those with tattoos, be aware that most Japanese hotels, ryokans, spas and many beaches ban tattoos (some may allow small tattoos to be covered with a bandage), be sure to research in advance if your accommodations/destinations have a no-tattoo policy (if a ryokan has a private onsen, you can use the private one).

Q. What place is next on your list to visit and why? 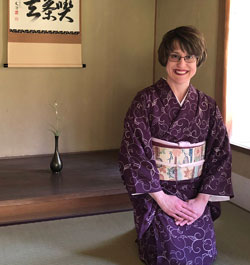 A. Next year will be my last year in Japan, so I am already planning my final trips to include Kyushu, Kumamoto, Miyazaki, Shikoku and the San’in Coast (Shimane Prefecture). Hopefully this will include hands-on ceramics experiences in Arita, visiting Kami-shikimi Kumano-imasu Jinja in Takamori, and walking at least part of the 88-temple pilgrimage in Shikoku along with attending the Matsue Water Lantern Festival, which has been on my wishlist the last four years. I would also like to visit Eiheiji in Fukui (one of two head temples of Soto Zen founded in 1244) and participate in the Sanro Zen meditation experience.

A. Local currency. When traveling in the countryside especially, many hotels and restaurants are cash-only. Also, older diesel trains do not have outlets for charging phones, so bring a power bank to charge mobile devices. And of course, spare camera batteries, extra SD cards, and a sense of adventure!

Q. Finish this sentence: When living in a foreign country …

A. Never pass up the opportunity to experience local culture, especially when invited to participate!