Today, ninjas aren’t just pop culture icons, they’re jumping out of the screen and into becoming a major tourist attraction in Japan. 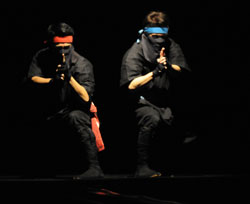 Fans have many options when it comes to seeing ninjas in their natural environment. From live-action shows and ninja dojos, to shops stocking all their weapons and tools, many kinds of attractions related to these shadow warriors are available. And, Okinawa is no exception to the trend.

Lequios Theater at Cape Zanpa, a 15-minute drive from Torii Station or 40 minutes from Camp Foster, is home to “Ryukyu Ninjas.” This group of performers hosts live-action shows here nearly every Friday and Saturday.
Much like their mainland counterparts, these ninjas perform swash-buckling with swords and display unique weapons on stage. Okinawa ninjas have a unique feature, however, according to Hiroshi Toyama, president of Ashibi Entertainment. 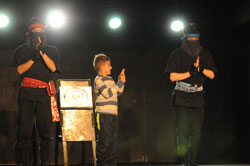 “Speed is what sets us apart from other ninja shows. Our performers are very young, in their early twenties, while performers are around 40 for many ninja shows on the mainland. Plus, our live actions are based upon Karate and Kobudo [an old form of martial arts],” Toyama explained. “So, there will be battles between ninjas with Japanese swords and those with tonfa batons or nunchaku, as well as battles between ninjas and a karate master.”

Because they perform with real weapons in their hands, the actors of Ryukyu Ninjas train long hours to be able to pull off their dangerous stunts. The venue has a T-shaped stage, where performers move in all kinds of directions, sometimes even taking the show offstage and into the audience. Once the show starts, audience members are asked to stay in their seats for safety reasons. 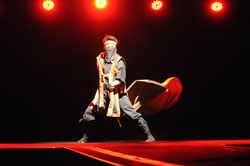 The show isn’t a copy of any particular ninja movie or a “Karate Kid” reenactment, the plotlines are inspired by a bit of Okinawan history and Ryukyu Ninjas are actually inspired by ninja spies from the Ryukyu Kingdom (1429 – 1879). Some of them were known as ‘Ninbucha.’

In a sense, Ryukyu Ninja has something in common with their forerunners; they are entertainers who play the role of spies on the stage. The historical context within the group and their shows appeal to many of their American audience members, Toyama added.

English-speakers can easily follow the story line along with subtitles on the monitors. The shows are fun for all ages and even have an ad hoc dojo for kids who aspire to become ninjas themselves. At the beginning of the show, several kids are invited to get on the stage to try a couple of ninja star throws.

In the second act, the ninjas include children into the performance. Between acts, they’ll sing “Happy Birthday” to the kids in the audience celebrating. And, at the end of the show, the best kids in the ninja star throw trials are announced and a gift is given to them.

Steph Pawelski, who along with her husband and children recently watched the show for first time said her family enjoyed it.

“Okinawa has been our home for six years now. We are trying to do a lot of things we haven’t yet,” she said. “This is one of the events we hadn’t seen. Now we are very happy that we came here.”

Her son, William, was chosen as the best ninja for his star throwing skills. When asked about his ninja star throws, the 7-year-old said, “I was not nervous. I had a fun getting on the stage, throwing these (stars) was kind of fun, and these can beat a ninja sword.” 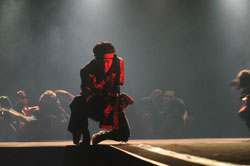 The appeal of “Ryukyu Ninja” to an American audience can be traced back to live entertainment shows Toyama saw in Las Vegas in the 90s. At the time, ninja movies by Sho Kosugi and “Teenage Mutant Ninja Turtles” were very popular as well.

Besides watching an entertaining show, visitors can also visit for other activities including trying out ninja start throws, blow darts and even photo sessions in full ninja or kimono costumes. You can try these extra activities in the building adjacent to the theater before the weekend show or during weekday business hours.

Let Ryukyu Ninjas awe you with their amazing tricks and give you a hidden history lesson into Okinawa, all in a 60-minute action-packed show.