Participate in the Naha Tug of War on Oct. 13

Participate in the Naha Tug of War on Oct. 13

Naha Tug of War, a Guinness-certified event, will return Oct. 13 for its 49th installment. Route 58, arguably the busiest street in Okinawa, will once again be filled with a crowd of 270,000 or more.

The day of the event will feature live entertainment to help boost the excitement leading up to the big game.

Starting 11:30 a.m., watch as 14 groups of locals march down Kokusai Street, carrying labarum, or vertical banners, which are 23 to 33 feet in height and 88 to 132 pounds in weight, or demonstrating karate as firecrackers go off.  At 2:30 p.m., once all the procession reaches Route 58, it is time for the main event: the tug of war.

The main rope, which is five feet in diameter and composed of two parts, is assigned to east and west teams. Before the two teams compete against each other, they must first work together. Following tradition, the two rope parts are manually joined on-site. By pulling smaller and thinner ropes attached to the big ones, people on the two teams nudge their main ropes to the right position where loops at the end of the two main ropes will be jointed with an 805-pound bar. Naha Tug of War is just as much a collaboration to build something big as a competition to beat the other side.

Once combined the two ropes become a 650-foot long and 40-ton mammoth. This giant rope then requires around 15,000 people to pull.

Whether you choose to be on the east or west side, expect to see people of all different ages and backgrounds working together, side-by-side and chanting “Haaiya!”

The Naha Tug-of-War is thought to have originally started in the 15th century during the days of the Ryukyu Kingdom (1429 – 1879). Homage to the history will be seen in many parts of the presentation. The labarum carriers will be dressed in traditional attire and shortly before the war kicks off, locals dressed as historical figures of Okinawa will jump on the giant rope.

The tug-war-war itself can be a heated competition. Sometimes, it takes almost half an hour to pick a winner, but victory isn’t the only motivation for the game. According to the organizer of the event, people wish for peace, prosperity, health and success as they pull the giant rope.  Once the game is over, a significant portion of the rope will be cut into pieces, which participants can take for good luck.

The Naha Tug-of-War is an inclusive, cultural event unique to the island. Make plans to attend and participate for a taste of Okinawa’s history and a bit of good luck.

2:30 p.m. Route 58 between Kumoji and Izumizaki intersections closed to vehicles

5 p.m. The rope is removed, and part of the closed route reopens for traffic

*Tours to the events are currently available from MCCS and 18 FSS ITT. 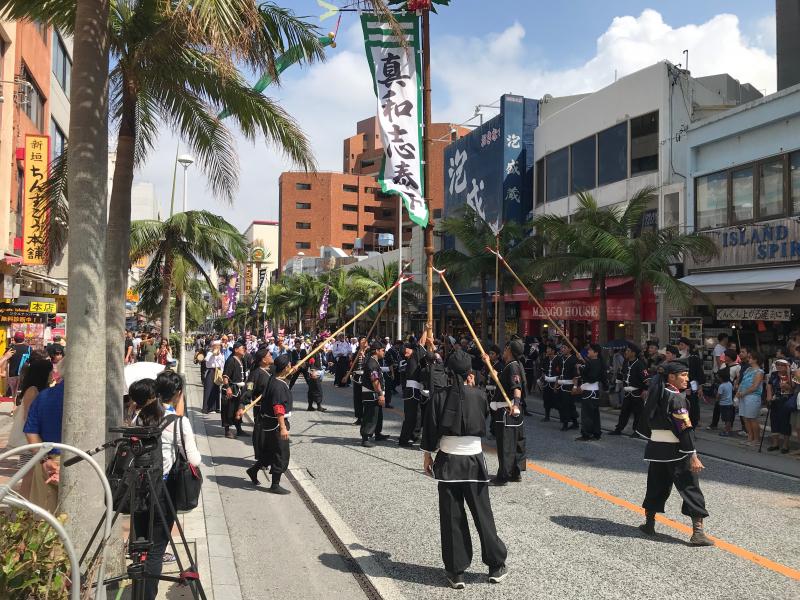 VIDEO| Get ready for the Naha Tug of War

Did you know?: Naha Tug of War used to take place after dark.

Okinawa's Naha Tug of War coming back with some restrictions Oct. 9