A brisk shinkansen ride from Tokyo through the bamboo-covered hills and rice paddies will bring you to Kanazawa, a charming coastal town often compared to Kyoto and referred to as the hidden pearl of the Japan Sea.

Here, old and new mingle effortlessly. The atmospheric samurai districts and centuries-old, cozy tea houses are coupled with the imposing contemporary art scene, modern architecture and the culinary wizardry of creative chefs. Historically, Kanazawa enjoyed its heyday of prosperity during the Edo Period (1603-1868), when it served as the seat of the influential Maeda Clan. They heavily invested in and fostered the development of local art which resulted in a rich cultural heritage that Kanazawa is known for today. Thankfully, the city escaped the air raids during World War II, leaving much of the old castle town intact and meticulously preserved for us to enjoy.

With one leg firmly planted in its rich history and the other leaping into modernity, Kanazawa offers plenty of hidden treasures to explore and spending a weekend here was an absolute delight. As always, I’m sharing the highlights from my visit to help you build your Japan itinerary. 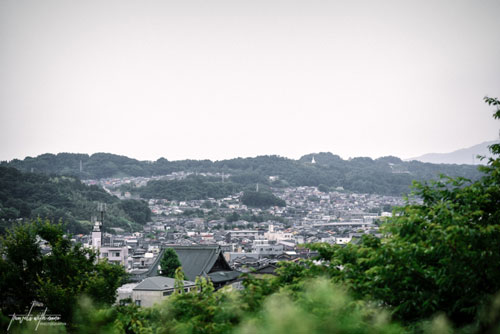 The city begins to impress the moment you get off your train. Kanazawa Station was named as one of the most beautiful train stations in the world due to its remarkable architecture. A colossal glass-paneled roof connects two gargantuan wooden poles thus forming Tsuzumi-mon, or the drum gate. Designed by Ryuzo Shiroe, the featured twisting poles resemble a traditional Japanese drum as a tribute to the performing art of Kanazawa and symbolize the city’s penchant to fuse tradition and innovation. 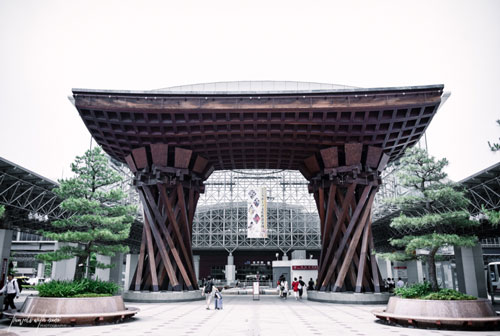 Originally built in 1580, the imposing Kanazawa Castle was home to the Maeda Clan for 14 generations. It was destroyed by a series of devasting fires but was restored to its former glory in 2001. Tip: if you plan to visit both Kanazawa Castle and Kenroku-en Garden (below) be sure to purchase the combination ticket rather than paying full price. This way the admission to both will cost you only 1,000 yen. 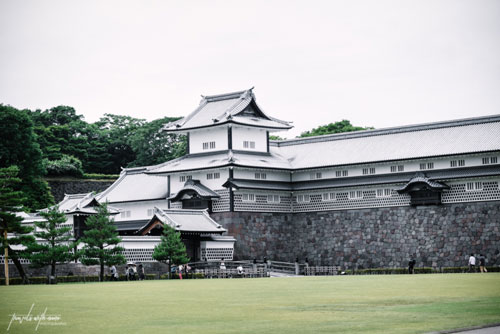 Right next to the castle grounds is the crowning jewel of not only Kanazawa, but the entire country. Kenrokuen Garden is one of Three Great Gardens of Japan, along with Korakuen in Okayama and Kairakuen in Mito. The name Kenroku-en translates as a garden of six, referring to the six attributes of a perfect garden: seclusion, antiquity, spaciousness, human ingenuity, water and scenic views. Needless to say, the spacious garden is filled with nooks and crannies that beautifully reflect all six features and is complete with secluded tea houses, brooks and koi ponds. The garden is known to be beautiful year-round, but especially so during spring and fall when it beckons crowds eager to view its impressive displays of sakura and autumn leaves. 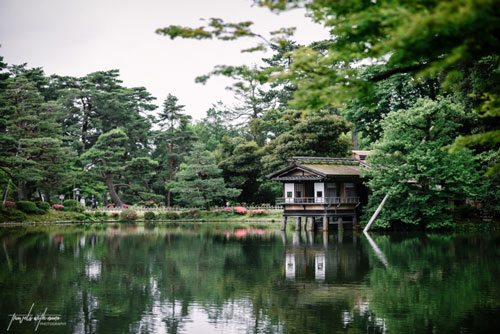 The charm of Kanazawa lies in its meticulously preserved samurai and chaya entertainment districts which exude the allure of the bygone era. As you wander along the crooked alleys lined up with the olden tea houses, former samurai mansions and geisha quarters, you cannot help but fantasize about the fascinating stories, secrets and scandals that have been concealed behind these wooden façades. 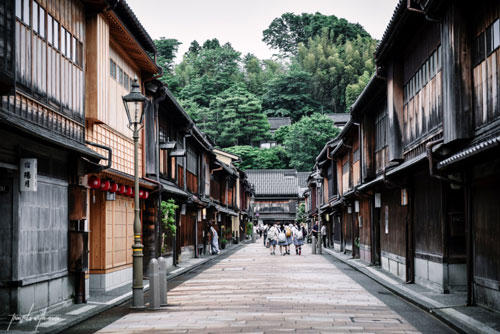 Stroll through Higashi Chaya District, which is perhaps the main entertainment district in Kanazawa. During the Edo Period (1603–1886), lords and high ranking officials would come here to experience performances by the talented geisha. Today, many of the original chayas have been remodeled into retail shops, cafes and restaurants. Although, several of them still continue to offer tourist-friendly, alas pricy, entertainment nights with geisha. 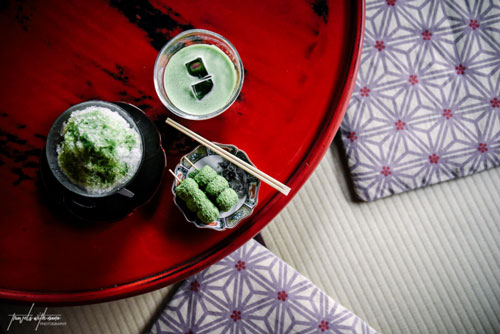 Equally cozy and atmospheric neighborhoods are Kazue-machi – located along the bank of Asano River – and Nishi Tea House Street. Once you’re done soaking up the atmosphere of the neighborhood, sip matcha in one of the tea houses (200-years-old Shima teahouse is one of many favorites), or shop for local crafts, traditional sweets or glittering gold leaf products.

Nagamachi Bukeyashiki District is another of the city’s well-preserved historical areas, which was once home to samurai that supported the Maeda clan. It retains a beautiful ambiance with its cobbled streets and mud-packed walls. Also, don’t miss Nomura Samurai House which displays the artifacts and heirlooms of the wealthy Nomura family and features an inviting garden and teahouse. 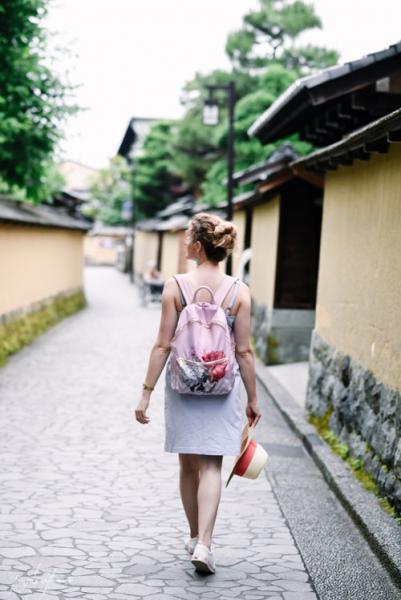 While talking about the historic heritage of Kanazawa, it’s impossible to skip Myoru-ji Temple (literally meaning “an oddly built temple”), also known as the Ninja-dera or Ninja temple. To be quite honest, it was one of the most memorable experiences in Japan. While not actually associated with ninja, the temple earned its nickname because of its many deceptive defenses. The façade of the building will make you think it’s just another Buddhist temple, but don’t let this deceive you. The inauspicious Myoru-ji is in fact filled with jaw-dropping series of trapdoors and secret passages. Apparently, the local lords designed Ninja-dera to serve as a defensive outpost in the event of an attack. 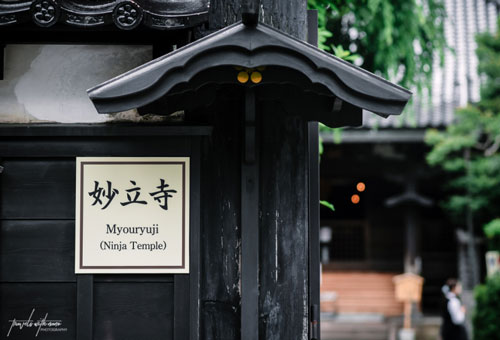 While it officially has four floors, when one takes into account all the hidden levels, this total rises to seven! The temple complex is built around a 25-meter deep well. The rumor has it, the well connects to the nearby Kanazawa Castle and was used by the Kanazawa lords as a safe escape during an attack.  It was so cool to go through the admittedly confusing network of secret rooms, hiding nooks, passages, and hidden staircases. I highly recommend reserving the spot on a tour in advance. It is given in Japanese only, but they give you a detailed translated brochure so that you don’t miss out on essential details as you go from trapdoor to trapdoor. The photography inside was forbidden and I won’t spoil the surprise with details, but be on a lookout for secret seppuku room, or hara-kiri room, used by lords as a last resort in case it was impossible to escape the enemy.

Kanazawa’s culture flourished under the patronage of the Maeda clan who encouraged local artisans and supported the development of arts and crafts. Some of the fine traditional crafts passed down to generations include Kaga-yuzen dyed silk, Kutani porcelain, Ohi ware ceramics, Kanazawa lacquerware, and Japanese hand-made sweets. 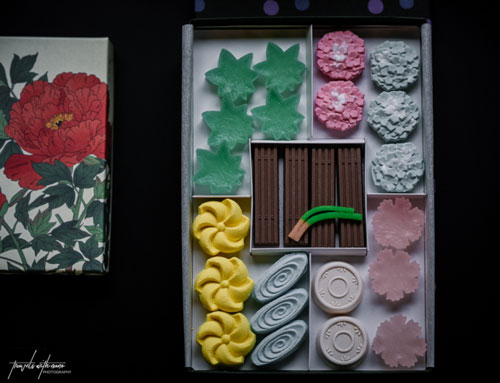 Above all, Kanazawa takes particular pride in its gold leaf production, manufacturing 99% of domestic gold leaf, 100% of domestic silver and platinum leaves. Even the name of the city links to this craft as Kanazawa translates into “marsh of gold” and stems from a legend about a local man who discovered flakes of gold while digging for potatoes. The products adorned with gold leaf are referred to as Kanazawa haku and are Japan’s designated traditional handicrafts. From decorative items to beauty products to edible food, gold is omnipresent as a flaunting vestige of the city’s glorious heritage. In fact, some of its creative use has earned Kanazawa a recognition by UNESCO Creative Cities Network as a City of Crafts and Folk Art in 2009. 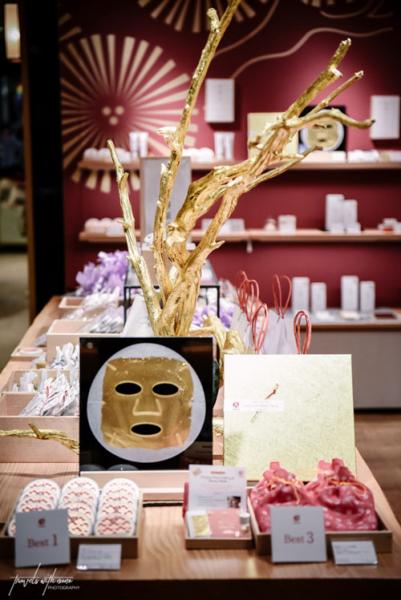 I highly recommend checking out Kanazawa Station’s souvenir section for affordable, gorgeous handicrafts as well as delectable gold-covered edibles. Also, the glittering Hakuza Gold Leaf Store in Higashi Chaya district is worth a visit. Their tea ceremony room is completely covered in gold leaf. It is as astounding as it sounds. You can also make your own gold leaf at the Kanazawa Yasue Gold Leaf Museum! To find out more about Kanazawa’s rich arts and crafts, follow this link to Kanazawa’s Tourist Information Guide.

Kanazawa’s contemporary art scene provides a refreshing contrast to the treasured historical sights. Don’t skip a visit to The 21st Century Museum of Contemporary Art which impresses with its futuristic architecture. Allocate a couple of hours to peruse it experiment-type art which includes sculptures, film and interactive exhibits by a variety of local and international artists. One of the most distinguished installations is ‘The Swimming Pool’ by Argentinian artist Leandro Erlich. By creating an illusion of a swimming pool filled with water, the work aims to undermine our everyday assumptions about what we think to be obvious. 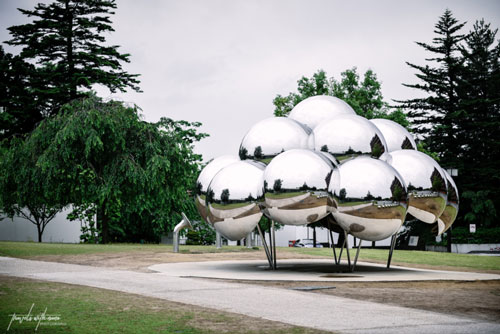 Another impressive contemporary space is D.T. Suzuki Museum dedicated to acclaimed zen Buddhist philosopher Dr. Suzuki who introduced Zen to the West. Designed by architect Yoshio Taniguchi, who revamped New York’s MoMA, the museum strikes with its refined minimalism and instantly sends you down the meditative path.

Kanazawa is known for its delicious seafood and there is no better place to savor it all than the 280-years-old food market. Omicho market is a maze of 185 stalls offering produce and the freshest seafood from the Japan Sea. Expect to see the oysters bigger than your hand, gigantic crabs and myriads of seafood served fresh or on skewers. I highly recommend hitting one of the many sushi-yas an early morning for a delicious serving of seafood for breakfast. I’m drooling while thinking about it. 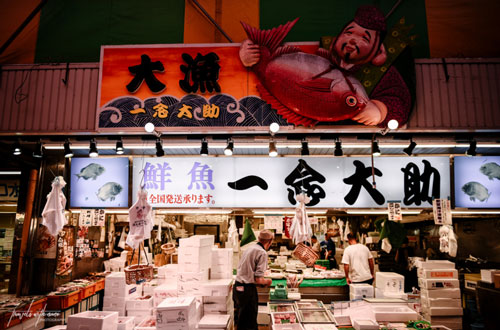 Where to Stay in Kanazawa:

I stayed at Hotel Pacific Kanazawa – a cozy, modern hotel conveniently located by the Omi-cho market. It was surprisingly affordable and came with a wonderful bonus: great coffee shop located at the lobby.

For general planning purposes, Kanazawa is easily accessible from Tokyo via shinkansen ride or an affordable express train from Kyoto. While planning your travel itinerary to Japan, I recommend following this route (granted you have enough days to spare): Takayama – Shirakawago – Kanazawa – Kyoto which are all connected with regular train/bus system and will allow you to see all the major historic towns of Japan, each with unique vibe and a story to tell. Kanazawa is also a great access point for the famous Tateyama Alpine Route which can be a long, day-trip or an overnight getaway, depending on the availability of your time and funds.

Hope you enjoyed this post as much as I loved putting it together. As always, I’m here to help you out if you have any questions while planning your trip.

Don’t forget to check out the post about my restaurant recommendations in Kanazawa.