As someone who grew up on Okinawa, “Who’s got the coolest lunchbox?” was not a question I remember hearing during my school days. So, when I heard about the American nostalgia surrounding decades-old lunchboxes from a coworker in the U.S., I was certainly intrigued.

I wondered, where did such reverence and nostalgia over a lunchbox come from?

So, I did some digging and came across many interesting stories. 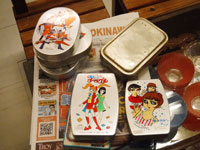 I found everything from an odd “Welcome Back Kotter” lunchbox, to how “Hopalong Cassidy” completely changed the U.S. lunchbox scene in 1950, and, of course, the Lunchbox Museum in Columbus, Georgia.

The stories provided insight into how people in the U.S. still enjoy talking about those old lunch boxes to this day. They are something people of a certain generation can relate to, and It made me envious of American culture.

In Japan, the bento box also can make for an interesting conversation.

These days, so called character bento, or “Kyaraben,” dominate the conversation in Japan’s lunch box scene. The ingenuity of mothers who arrange food in the form of animated characters or cute animals to impress their kids or other mothers are not only spotlighted on Instagram but also featured by the mainstream media home and abroad.

Japan even has the Bento Box Museum in Kyoto, where a variety of traditional bento boxes are on display.

But, it’s too early for the “Kyaraben” craze to be talked about in the past tense, as we are still in the middle of it. And movie or animation characters don’t belong in a showcase dedicated to classic bento boxes that date back hundreds of years.

It is hard for me to imagine bento boxes being worshiped as collectors’ items in Japan. But the combination of pop culture and lunchboxes in the U.S. still resonates with a certain part of me. 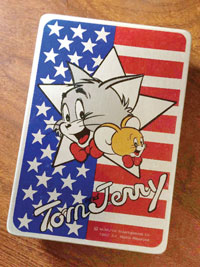 When I heard about the lunchbox madness in the U.S., I thought about a certain bento box I used to use. It was a metal “Tom and Jerry” box. I remember many kids having bento boxes like this in the 80s and early 90s. Most of them were thought to be made of aluminum or alumite, which is enhanced aluminum, and had drawings of Japanese animation characters on them.

I didn’t witness kids competing for the coolest bento box, or at least I can’t recall any memorable episodes. But it is a certainly a memorable item associated with my childhood. And, clearly it wasn’t only my childhood as now there are bento boxes displayed at small museums and for sale at retro stores.

Still, when compared with how old lunchboxes are treated in the U.S., efforts to document bento box design history seems to be lacking. And with the way Kyaraben is taking the media by storm, attention to such aluminum bento boxes remain to be modest at best.

In order to fill in the blanks, or out of my envy of American culture, I started digging in hopes to piece together some of the bento’s history.

As far as the history of aluminum/alumite bento box is concerned, there is some information that is clear.

Writer Yuko Shibukawa explains that aluminum bento boxes were first manufactured in Japan around 1897. Later, alumite was introduced to solve the problem of oxidation caused by pickled plum topped on white rice, according to the author.

But regarding information as to when characters began appearing on bento boxes, information was not so easy to find. 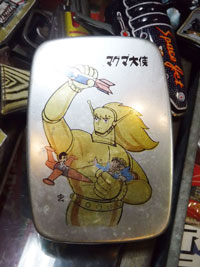 The first thing I turned to was that “Tom and Jerry” bento box I had. I called Skater, a company based in Naha prefecture that produces bento boxes with characters such as “Hello Kitty” and “Snoopy.”

A representative at the company said they had been around 25-30 years ago, but that there were others who were making the printed bento boxes before them.

Next, I turned to “Showa Hakubutsukan” (Showa Museum) in Yonabaru Town. Aluminum bento boxes with characters were among the many items such as tin toys and vinyl dolls that were on display.

Taking a look at their bento boxes was like tracking the history of pop culture in Japan. Cartoon or animation characters such as “Magma Taishi” (Ambassador Magma) and “Gatchaman” (Science Ninja Team Gatchaman), or those from a televised puppet play called “Hyokkori Hyoutan Jima” made me smile. I learned from Mr. Tokumura, the owner of the museum, that many of those bento boxes can be traced as far back as the 60s and 70s.

When I went to the museum, I had a certain character in my mind. It was “Mighty Atom” a.k.a. “Astro Boy,” which was known as the first domestically produced Japanese animated show. According to Japanese Animation Historian Yasuo Yamaguchi, the merchandizing of the boxes started with “Astro Boy” when “Atom Marble Chocolate” was sold by Meiji, a major food company. Atom Marble Chocolate was sold in 1965 according to the company’s website. That led me to infer that the Atom bento box could exist as early as the 1960s. Or, the bento box could have come out in the 1950s because the robot boy first debuted in a cartoon in 1952, ahead of its animation adaptation.

The Showa Museum didn’t have an Atom box at the time. Tokumura said he had had one at one point, but it was sold to one of his customers.

So, I checked with Tezuka Productions, which owns the cartoon and the animation show, and tried to identify when Atom box debuted. The company was quick to tell me that they had no information on the box. My effort to identify the first Atom bento box didn’t go any further than that.

But I stumbled upon a character-themed bento box whose history goes further back. 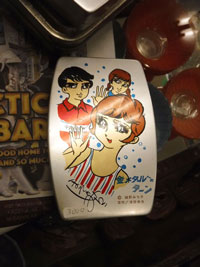 The Japan Broadcasting Corporation, or NHK, a public broadcasting network in Japan, recently aired a TV drama titled “Beppinsan.” It was about a children’s apparel company that was launched in Kobe by four women shortly after the war, and developed to become a top brand in the country, and even a provider for the Imperial family in Japan.

In one episode, the company decides to sell 300 alumite bento boxes as special items at their branch in a department store. To make them more appealing to customers, the female entrepreneurs drew animals on each bento box, which was a hit.

The drama was modeled after Familiar, an actual apparel company based in Kobe.

So I checked with the company to see if this actually took place. Ms. Ooyama, a representative at Familiar, was kind enough to look into it.

“Our record shows that the company sold bento boxes with drawings in 1949,” Ms. Ooyama said. “But it is hard to confirm that those were alumite or aluminum bento boxes.”

Regarding what kind of drawings they were, no concrete information was found. But Ms. Ooyama and I agreed that the animal drawings were likely given the company’s mascots, which are bear cubs named “Fami” and “Lia.” The mascots became official in 1951, two years after the debut of the bento boxes with drawings.

1951 happens to be a year after the debut of that “Hopalong Cassidy” lunchbox. I could not find any information that directly ties Familiar’s bento boxes to pop culture-themed lunch boxes in the U.S. Nonetheless, the cute animal drawings still appearing on Familiar’s bento boxes today seemed to strike the same chord as the U.S. lunchboxes with characters from “The Green Hornet” or “Lost in Space.” 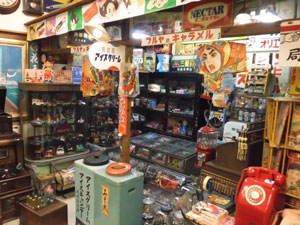