A while ago, I wrote a post about a road trip that I took with my puppies. I had a long journey coming up (I called it The Great Adventure) and wanted to do a test trip to see what taking my two gremlins on the road would be like. I was nervous about how they would behave or how difficult it would be, so we went on a little vacation for three (read more about it here). It went really well and left me feeling confident about touring across the globe and America with Hambone and Lulu for ten whole days. Our first trip was only five days long, but I figured, “how much harder could it really be?”

The answer… A LOT.

I decided a few months ago that I needed a change. So I left a job that I’d worked at for almost twelve years and moved from Tokyo, Japan to Savannah, Georgia. It seems like a simple-ish enough expedition. Buy an airline ticket, book space on the flight for the monsters, and get their health certificates from the vet. Unfortunately, it didn’t quite work out the way I imagined. I managed to get them on a flight from Tokyo to Seattle, but couldn’t get any carriers to transport them from Seattle to Savannah. They said it was too hot and could not transport snub-nosed dogs in temperatures 75 degrees or warmer. So I decided to drive. I figured it would be an excellent opportunity to see parts of the U.S. I’d never seen (and always wanted to) and visit a few friends along the way. 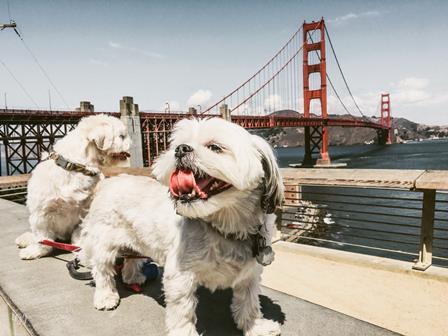 Our adventure started off a little rough. Our flight out of Tokyo was canceled several times due to weather, which caused a kink in our hotel reservations. But after a few days and a few tries, we made it to Seattle! Let me tell you, hauling two full-size suitcases, two dog kennels, a backpack, and the extras by yourself is HARD. It doesn’t sound like that big of a challenge. I definitely didn’t think it would be. But not being able to leave anything unattended and loading and unloading everything by yourself is tough. Not to mention how challenging it is getting to and going through multiple terminals, customs, and facilities. These are all things to consider when flying with pets, especially if you’re traveling with more than one.

After arriving in Seattle, the next order of business was getting our rental car and a hotel. I arranged the rental car before I left Tokyo, so it was just a matter of paying and taking possession of the vehicle. Getting to the car was mildly cumbersome (the cars were in a separate location), but the rest was pretty easy. Finding pet-friendly hotels was uncomplicated as well. Most apps allow you to sort through places based on the amenities you want. I was surprised to learn that so many hotels these days allow guests to bring their furry friends. There is ALWAYS a fee (non-refundable) and there are rules you must follow (like where animals can and cannot go and that they must always be on a leash), but overall, I was pretty happy about how accommodating these places are. The only negative is that you aren’t allowed to ever leave pets unattended in your hotel room, even if they’re in a kennel. This makes it hard to do a lot of things when you’re traveling alone. 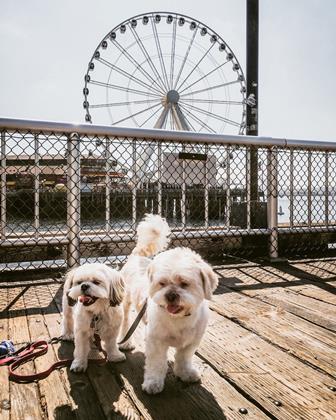 One of my biggest worries was that they might bark or misbehave staying in places that aren’t home. Not to mention, the jetlag from the 17-hour time difference. Routine was key on our first trip, but I just couldn’t manage it this time around. I just kept hoping they would adjust better than I was. And they did. The monsters did sooooo good. We didn’t have a single accident anywhere. I did take them on long walks in the mornings and before we went to bed each night. I also made sure to give them plenty of breaks during the day (much more than they are used to) to prevent issues. Finding places to walk that were well-lit and sufficiently populated was sometimes hard, but we managed. Most of the hotels offered suggestions and one even offered to escort me.

One thing I noticed is that cities on the west coast are a lot more pet-friendly. Most places in Washington and Oregon allowed me to bring Hambone and Lulu inside and fed them treats. Some even brought out water bowls for them. I was able to take them in markets, shopping centers, and even Target. I saw a lot less of that the farther east I drove. 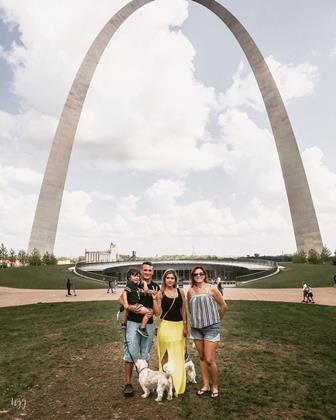 I was also concerned about them being in the car for so much time, but luckily for me, they did great there too. I used to take them on short rides regularly, so being in the car wasn’t new to them, and luckily, they don’t get motion sickness. But dogs, like humans, aren’t always themselves when they feel stressed. Staying in different places, without their beds or their routine is taxing on them. So I made sure we stopped often to play and explore. That kept them pretty happy.

We drove through twelve states in ten days. We stopped in Seattle, Coos Bay, Napa, San Fransico, Las Vegas, Colorado, Kansas City, St. Louis, and Nashville. We met up with three of my closest friends and created countless memories. While I don’t think I want to do it again any time soon, but our trip was a success. The only downside was having to eat in the car most of the time. And being crazy jetlagged.

I think it’s safe to say Hambone and Lulu are now travel pros. And that’s a good thing because we have another big adventure coming up in just a few weeks. We’re heading to Europe! The travel should be easier. I’ll keep you posted. 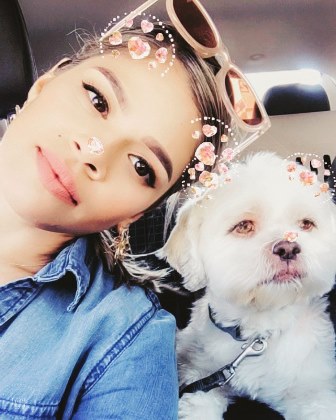 ** This trip actually occurred a few months ago, but I’ve had a lot going on so I’m only now getting around to writing about it.