When feudal Japan re-opened to foreign relations after centuries of isolation in the 19th century, it had a lot technological catching up to do. Nagasaki was at the forefront of Japan’s rapid modernization. 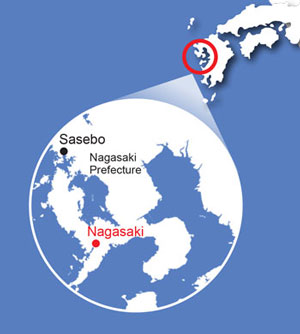 Previously the home of Japanese Catholicism and Japan’s Dutch trading post, Nagasaki was already uniquely suited for international trade even before Western steel and steam entered the country.

Japan’s industrial revolution would mark the first successful transfer of Western industrial technology to a non-Western nation. While the modernization began before the Meiji Emperor took the throne in 1868, 23 sites around Japan are collectively on the UNESCO World Heritage List as the Meiji Industrial Revolution.

The biggest collection of these industrial sites is in Nagasaki. So, on the eve of our move from Sasebo to Okinawa we set out for one last trip to learn the stories of these tangible heritage sites, their people and the triumphs of the area. 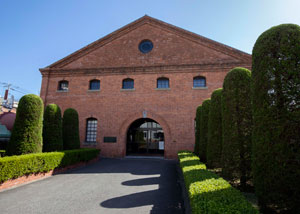 Boarding a van at Nagasaki Station, we were taken on a tour of the Mitsubishi Shipyard, which may look like any other shipyard or naval station. This one, however, is home to five UNESCO sites. The shipyard began in 1857 as an ironworks but grew into a full shipyard which was taken over by Mitsubishi in 1884. The shipyard is active and normally off-limits, so the tour is the only way to visit.

Our destination was the museum, an akarenga (red brick) former pattern shop that was built in 1898 and one of the UNESCO sites. Along the way we stopped to view another site— the giant cantilever (“hammerhead”) crane imported from Scotland in 1909 and Japan’s oldest crane still operating today. (An identical crane is still operating in Sasebo, but it was imported in 1913 and lacks any special status.)

The orderly museum is easy to walk through and understand with mostly small artifacts and photographs on display but its bigger pieces like the oldest machine tool in Japan and a Type 91 aerial torpedo are historically noteworthy. (The torpedoes used at Pearl Harbor were built by Mitsubishi in a Nagasaki plant.) Both civil and military ship construction are covered, and I could have spent hours looking at all the photographs of the evolution of both ships and shipyard. 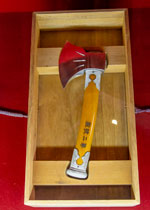 For warship enthusiasts though, there’s one section that really matters. This section covers the 1940 launch and history of a new, secret warship at the time constructed at Nagasaki Shipyard. The 65K-ton warship spent two years of construction hidden from sight by building-sized palm fiber curtains. She was so secret the hatchet used to cut the rope symbolically tethering her to land didn’t even give a name.

After hitting the water, she would be better known as “Musashi.” 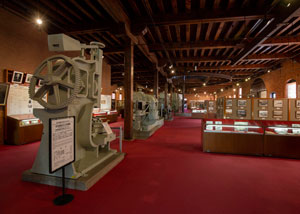 Given the usual cult-like following of Yamato, her sister ship rarely gets as much attention. They have both the hatchet and a length of cut rope from the launch ceremony on display and I got to try my strength lifting a 22-kilogram sledgehammer used in its construction.

English is prevalent throughout the museum, though not everything is translated. Tours have to be arranged by phone. My only complaint is that the tour gives visitors less than an hour here and that is not nearly enough time.

We returned to Nagasaki Station and only had a few minutes to rush over the pedestrian bridge for the ride to our next destination. Riding a vintage 1950s tram is a daily opportunity in Nagasaki but we were here on Oct. 14, Tetsudo no Hi (Railway Day), the 147th anniversary of the opening of Japan’s first railway (Tokyo-Yokohama). Nagasaki Electric Railway marked the occasion by bringing out a special creation of the Meiji Industrial Revolution.

Tram No. 168’s arrival was heralded by the sound of its physical bell being rung by the conductor. The brown wooden street car was a contrast to its colorful counterpart on the opposite platform looking as if it had truly just arrived from another era. Built in May 1911 by Kawasaki Shipyards, it has served Nagasaki for over a century. 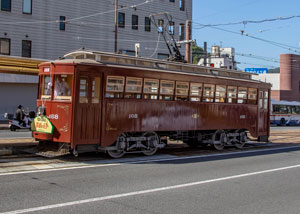 Packed with train enthusiasts, I stood most of the trip to watch the conductor work the brass controls and bell.He’d dropped the frontwindows, so we were getting a good breeze, too, as it clattered alongside aerodynamic modern cars. It bears stepping back and appreciating just how much the world has changed since then, but this tram still works, no modern amenities or updates needed.

This is the most “modern”Meiji-era tram I’ve ridden as its cab and passenger compartment are fully enclosed. Its understated paintjob and trim, and the simple, elegant interior made it a rather charming way to move about the city. We got off at the last stop and continued on foot through Chinatown and past the historic stone bridges before arriving at Glover Garden. 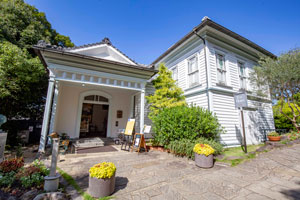 For the casual visitor, Glover Garden is a collection of beautiful colonial homes from the late 19th century in a relaxing park setting made for sunny days. Complementing its natural and architectural beauty are the stories within each building that tell of the colorful foreigners who lived in these homes and aided Nagasaki’s modernization.

Its unimpeded views of Nagasaki Bay and the Mitsubishi Shipyard are some of the best panoramas in the city, and, sadly, also part of the reason the park exists today.

The Glover in Glover Garden comes from Thomas Glover, a Scottish merchant who came to Japan in 1859. He arrived in a time of impending turmoil that boiled over into revolution and civil war and he made the most of it.

As a merchant, he befriended future revolutionaries, selling weapons to them and the legitimate government, and helping smuggle samurai out of the country when such an act would be a death sentence. As an industrialist, he aided in the creation of the shipyard and Japan’s first modern coal mine. Later in life, he was a founder of the Japan Brewing Company, the creators of Kirin Beer.

Glover’s Japanese son Tomisaburo Kuraba was forced to give up the Glover House in 1939 due to the secrecy around the construction of Musashi just across the bay. During WWII, Kuraba was at the center of police harassment due to being half-British. This would lead him to withdraw from public life and eventually to commit suicide less than two weeks after the war ended. 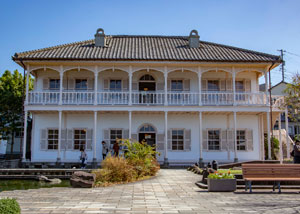 The former Glover House is the park’s centerpiece with the eight homes and buildings surrounding it to form quite the historic neighborhood with an air of Meiji-era romanticism.

Each house is partly a home frozen in time and part museum with exhibits about the owners or related topics. Rooms open to the public are furnished as their owners would have left them. These homes are unique in that they are Japanese carpenters’ interpretations of imported British architecture.

Glover’s home was built in 1863 and is part of the Meiji Industrial Revolution collection for being the oldest Western-style home built in Japan.

Sadly, since it is under renovation, the home is not accessible at this time.

We could only see two of the Mitsubishi shipyard UNESCO sites on the tour that morning, but from Glover Garden we could also see Dry Dock No. 3, which was finished in 1905 and is the oldest operating dry dock in Asia. (The Senshokaku Guest House is on the hill behind it but invisible from this angle.) There’s also a better view of the crane.

When visiting, a break needs to be taken at the café Jiyutei, Japan’s first European restaurant. The café offers Dutch coffee, brewed by slow-dripping cold water over grounds for up to 12 hours, a potent option when you need your coffee at its strongestbut without sacrificing the delicate flavor. This trip, we opted for a lighter tea and some sweets. They serve Western-style cakes, parfaits and unique sugary creations.

All signage is in English except for rotating displays.

To get the most out of a trip to industrial heritage sites, I recommend visiting
http://www.japansmeijiindustrialrevolution.com/en/
which has information on all the sites, how to access them and has an interactive app.

While in Nagasaki you can also book a ferry ride and tour to Hashima Coal Mine, another Meiji Industrial Revolution site better known as Gunkanjima or “Battleship Island.”

5 destinations for history buffs in Nagasaki

You don’t have to travel far from Sasebo to enjoy Japan’s culture, sights