When Commodore Perry arrived in 1853 to deliver a letter, Japan had no means to keep the postman away. The nation was sent into chaos resulting in the overthrowing of the Shogunate, abolition of the feudal system and social class structure, and the establishment of a new order- all this because Japan lacked the coastal defense capabilities to keep out unwanted visitors.

After the Meiji Restoration the Imperial Japanese Army worked to ensure such an intrusion could never happen again and began a decades-long program of building modern coastal defense fortresses around the nation. At the end of the 19th century work began on fortifying Sasebo Bay and protecting its treasure, the Sasebo navy base. 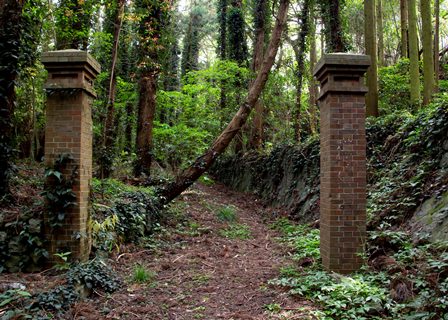 It’s impossible to overstress Sasebo’s strategic value. During the First Sino-Japanese War and Russo-Japanese War Sasebo was the logistics hub for the attacking Japanese naval forces. When Togo won his great victory in 1905 at Tsushima, defeating a larger Russian fleet with no losses, he sortied from Sasebo. When MacArthur went to Inchon in 1950, he left from Sasebo and with its unparalleled munitions storage and fuel capacity it continues to serve the fleets of two naval forces to this day.

A broad, deep bay contained by a narrow-mouthed dogleg entrance surrounded by forested hilly peninsulas, Sasebo Bay is a natural safe haven from stormy weather and with Sasebo Fort’s batteries of the finest German and British-made howitzers and cannons ringing the hills Sasebo Bay was converted into a hardened bulwark against naval assault. An invader would have to brave the heavily-mined waters while under constant direct and indirect gunfire to get in, only to find itself faced with a military port teaming with warships. 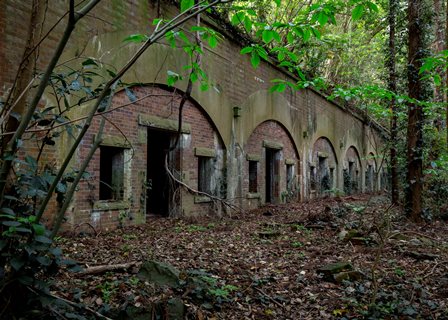 Active during the Russo-Japanese War and World War I, Sasebo Fort’s batteries never fired a shot in anger and the fort was disestablished in 1936, as the army’s manpower was needed in China and the naval threat to Japan became minimal. The guns were dismantled one by one until the last was removed in 1942.

The guns and mines are gone, but their support infrastructure of bunkers, gun pits and observation posts remain, ruins of another era slowly disappearing into the forest waiting to be rediscovered. For those willing to go the full distance, there’s also a rather rewarding view of one of Sasebo’s most popular sights. 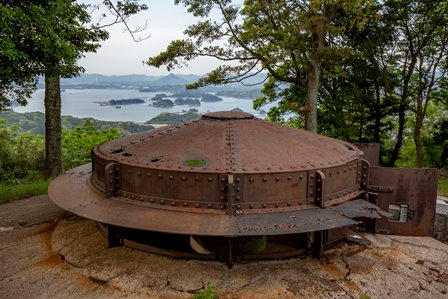 Several batteries remain but for the best use of time we stopped only at Kokubi and Marudeyama. Kokubi, hidden entirely under a forested canopy, is neither overgrown nor maintained, like a perfectly prepared set from an adventure story and comes with rows of empty red brick barracks, gunpits half lost to nature and other small traces of what was once a modern military post less than a century ago. For anyone who’s been to a Meiji fort Kokubi should feel familiar as these were all built to highly standardized patterns, each piece identical nation-wide but locally arranged based on geography.

The pinnacle of Sasebo Fort is the steel-hatted observation post atop Marudeyama. For military historians visiting one of the only two surviving Meiji era observation posts to still have its armored cover makes the trip worth it. For his tired wife it’s the unique view of the 99 islands this fort once defended. Watching the scene of flat blue waters and spiked green hills and islands from inside the observation post a visitor gets the best of both worlds. (And also tetanus if he’s not careful. This steel has been outside for a century.)

Marudeyama also has related batteries, but they are significantly more overgrown and smaller than Kokubi rendering them redundant if short on time. 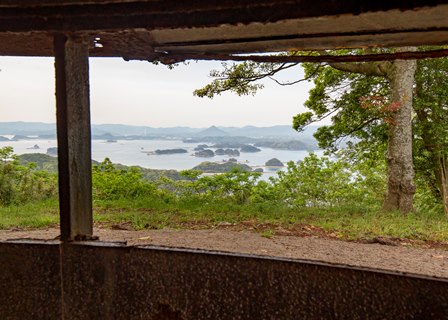 Getting to the forts in Sasebo’s Tawaragaura-cho is easy but trying; there’s not many roads to get lost on once you’re behind the Navy’s Akasaki fuel terminal, but it’s a narrow country road in varying states of repair that as we got closer to the battery ruins became more covered in foliage and had a few hairpin turns so tight that my wife had to stop, reverse and re-angle our little Nissan March to make them. It runs through a combination of forests and farmer’s fields in an otherwise unpopulated stretch of peninsula. On paper it’s close to Sasebo, but in practice it took more than half an hour to get from Sasebo Station to Kokubi Battery.

Parking is non-existent, but it is acceptable to park by pulling off the road.

All Sasebo Fort heritage sites have large, dual language signs which give a good amount of background supported by images and old maps near their entrances. This is important because these signs both act as obvious gate marker and the only source of information you’re going to find out here. Without these signs it can be easy to miss the walking path up to some of the batteries and other almost disappeared sites.

Other than the signage these batteries are otherwise left as is, which means no handrails or safety measures, the occasion pitfall (yes, actually pits where equipment used to be) and heavily mudded stairs to make descending into the dug-in munitions bunkers a little dangerous. Though honestly, if there’s no potential for injury what’s the point? Ironically my best near-loss of limb scar is thanks to the slippery safety features added to Saiki City’s southern Sasebo Fort, Ishiharadake.

Kokubi Battery is by the road up the hill heading towards Marudeyama if you take the road toward the light house at Tawaragaura’s southern tip and follow the signs up to Marudeyama.

5 destinations for history buffs in Nagasaki