The coastal area of Shinagawa as seen from the Tokyo monorail. Photos by Takahiro Takiguchi

With attractions that include a horse track, shrine, aquarium and waterfront brewery, Shinagawa makes for a great one-day trip for anyone looking to get off base and explore part of Japan.

Shinagawa was developed as a post town and was a gate city of Edo (old Tokyo) for the western regions of Japan for hundreds of years. Located in Southeast Tokyo, many tourists would pass through or stay overnight in Shinagawa on their way to the big city.

Nowadays, it is still an important gate town of Tokyo, as Shinagawa Station is one of the Tokyo’s largest stations with 22 platforms for 8 railway lines including the bullet train.

More than 530,000 passengers get on and off the trains at the station every day, including tourists on their way to Kyoto, Osaka and other parts of western Japan, as well as Tokyo salarymen on their way to work.

Despite the hundreds of thousands of people just “passing through,” Shinagawa has plenty to make it a destination for anyone staying in Japan.

One of the Tokyo 23 Wards 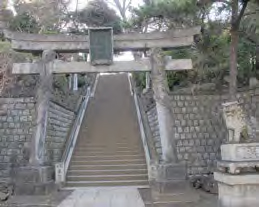 What better way to start a day trip in the traditional gate town of Tokyo than by visiting the majestic Shinagawa Shrine?

Since Shogun Minamoto Yoritomo founded it in the 12th century, numerous feudal lords visited and worshipped the shrine as they sought safety of sea travel and victory in battle.

Raised up along long gray stone stairs, you will find a traditional black shrine hall with two torii gates. Go through the torii gates and make a wish in front of the shrine hall by casting a coin, making two bows, two hand-claps and again, one deep bow.

You may notice a small mountain in the shrine garden near the stone stairway. It is a miniature Mount Fuji, called “Shinagawa Fuji” or “Fujiduka”. Because Mount Fuji is so worshipped, people will climb and hope to have their wish granted at the top. The tiny artificial mountain was built for those who were not able to climb the real Mount Fuji. If you climb the mini-Fuji, be sure make your wish at the top.

Did I mention the shrine is known as a strong “power spot” - a location that many believe gives you power and luck? 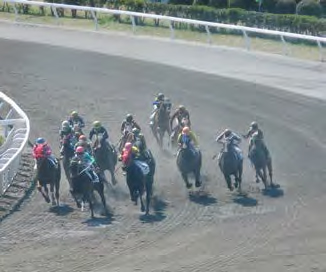 Ok, now you’re feeling lucky after visiting the shrine and miniature Mount Fuji, so take a walk up to Ohi Racetrack, aka Tokyo City Keiba (TCK), to test out your new-found luck.

With more than 11 million people visiting each year, the TCK is one of the most popular racetracks among six racetracks available in the Kanto Plain.

There is outdoor and indoor bleachers, or you can sit in special box seats on the observation decks for an additional 1,000-3,000 yen.

On a given race day, you’ll find thousands of people, mostly men in their 60s or older with a few younger couples, busily studying and marking up their programs. Once the race starts, the crowd roars and the horses bolt out of the starting gate, galloping along the one-mile track at breakneck speed for less than two minutes.

If you’re feeling really lucky after wishing at the Shinagawa Shrine, there is the “3-ren-tan,” (trifecta) where you try to pick the first three finishers in order for a single race. In 2010, one of these 100-yen tickets paid out a record sum of roughly 25 million yen ($225,000).

With the 3-ren-tan, there are 9 ways of betting available at the racetrack. The cheapest ticket is just 100 yen. You can buy any of these tickets – just mark the horses’ numbers, the type of bet you want and the amount on the application form and insert it with money into a ticket machine. After that, you’ll get your wager ticket and you’re good to go. The forms are in Japanese, but the Japan Racing Association has an online guide in English.

The newly renovated Diamond Turn restaurant offers quality buffet dinning on the 4th floor of an observation deck - a great place to watch the races. 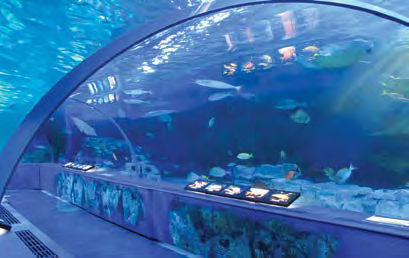 Be sure to drop by Shinagawa Aquarium nearby the racetrack, as it offers full-scale displays of more than 450 species throughout its 25 areas.

Must-see attractions in the aquarium include giant tanks with see-through undersea tunnels. Walking through the glass tunnels, you can get a close look at 1,500 fish and more. You feel like you’re walking on the ocean floor as you see countless species swim past you, including groupers, sea breams, sharks, turtles, giant rays and seals. It is a truly amazing and surreal experience.

You can also operate a remote-controlled turtle-shaped robot that swims in the tank. Its water-proof camera and high-resolution monitor let you observe these sea creatures even closer.

The aquarium also features seal and dolphin shows 10 times a day. Here, you can see giant dolphins jumping through hoops while cute seals wave to you with their funny gestures.

There are various other tanks full of colorful coral reef-dwelling fish, large fish from the Amazon River, electric eels and transparent Indian glassy fish, along with mammoth sharks and several different penguins.

It may take a couple of hours to enjoy all the tanks and attractions.

The aquarium is situated in a large public park with a saltwater pond, lots of rocks and various flowers. It’s a nice place to take a stroll and enjoy a hot dog or some popcorn on your way back from the aquarium. 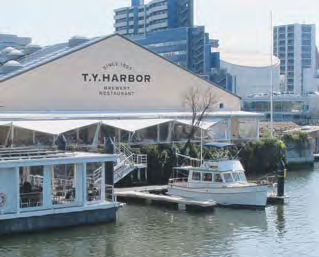 Don’t miss wonderful views of the Tokyo coastal area from the monorail that runs through Shinagawa. Take a 10-15-minute walk from the aquarium to Ohi Keibajo-mae station to find this unique train.

Seats on the monorail are installed on the center of train, which enables you to enjoy the impressive views of Tokyo coastal area.

Get off the monorail at Tennozu Isle Station to visit a stylish craft brewery located on the waterfront.

With the open, peaceful atmosphere, T.Y. Harbor is an ideal place to wrap up your one-day Shinagawa strolling with its savory homemade craft beers and tasty dishes. Large triangular-roofed brewery buildings, wooden decks, boats and piers in front of the brewery form a picturesque vista with surrounding iron bridges, parks and colorful buildings.

The wide, wooden interior and high ceilings give the bar a classical look and cozy atmosphere. At the restaurant, you can sit indoors or out along the water. I recommend the deck, as you’ll have a beautiful view of the canal and all the boats that pass.

The pale ale was my favorite with its extremely fruity and hoppy, yet crispy bitter flavor goes well after long day of walking around the area.

As T.Y. Harbor is a very popular spot and always crowded with customers. A reservation is recommended, although waiting along the waterfront for a table isn’t such a bad option.

Capsule Hotels … Yes or No?