If you’ve visited or are planning to visit Nagasaki, you know that the Atomic Bomb Museum, the Peace Park and the hypocenter are the city’s most common sites associated with the Aug. 9, 1945 bombing. Less than 500 meters away, however, is another place less known, but with a unique perspective to share. 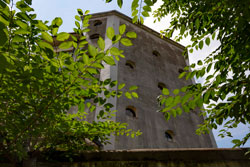 Hidden behind trees on a forested hill just across the Uragami River is Shiroyama Elementary School.

Though first opened in 1923 as Shiroyama Jinjo Elementary School it would become Shiroyama National School in 1941 in accordance with a new national law.

Before its name-change, a three-story reinforced concrete building was added to the property in 1937. During the war, the building was painted in camouflage and its use was split between the elementary school and the Mitsubishi Arms Factory. The factory used the second and third floors as an annex, in an attempt to decentralize the targetable factory. The main factory’s historic contribution? Producing the aerial torpedoes used at Pearl Harbor. 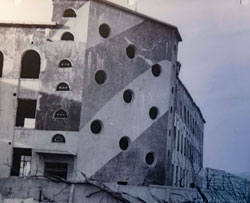 On the morning of Aug. 9, 1945, about 31 school staff and their family members were at work along with 120 Mitsubishi employees. The latter group was mostly comprised of gakuto-doin, teenage high school students drafted to work in munitions factories. Most of the 1500 students enrolled at the school were presumed to be at home when the bomb detonated at 11:02 a.m.

Of those present, 28 school staff members and 103 of the factory employees died; it’s believed about 1400 students in the surrounding neighborhoods died as well. After the bombing, the school’s sports area would be used to cremate the deceased.

The concrete building was later repaired and remained in use until it was torn down in the 80s. A corner stairwell was preserved as a peace museum.

What sets this school and other atomic bomb surviving structures apart and makes them worth seeing is that you can’t recreate them in a purpose-built museum. Wreckage can be displayed at Nagasaki or Hiroshima’s peace museums, but it’s not the same as standing at the place itself. Our guide pointed out the hypocenter hidden behind layers of tall buildings a short distance away. There were people standing were we were when it hit and now this is a place to share those people’s stories.

In particular, Vice Principal Arakawa Hideo left behind his thoughts and art work about the school and bombing. Arakawa was in a meeting with the principal in his office when the bomb went off, but he survived and went on become the new principal, helping see the school through difficult times. 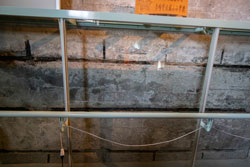 Though almost entirely bilingual, I was helped along on my visit by a volunteer guide who spoke both English and Italian. While what’s displayed is self-explanatory and understandable, I appreciated having someone who could add more detail.

The museum isn’t artifact-heavy like the Nagasaki Atomic Bomb Museum, but the building itself is the primary artifact; with the concrete walls stripped bare, bomb-damaged, blackened wood blocks are visible along the stairs leading to the second floor. Along the stairs and in the halls are many photographs and maps from before and after the bombing along with the personal stories from the war and its aftermath. The top floor also has a large detailed model of the school as it appeared right after the bombing. 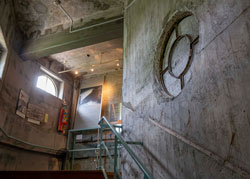 The museum is quick to go through if coming as part of a larger trip to see the atomic bomb-related sites in Nagasaki. Despite its proximity to the bigger and more famous sites which almost every American servicemember stationed in nearby Sasebo has been to at least once, our guide told us Shiroyama gets very few American visitors. I believe its location across the river inside school property doesn’t make it an obvious atomic bomb site. I only discovered it accidentally while researching Honkawa and Fukuromachi elementary schools in Hiroshima.

Shiroyama is free to visit and open during school hours. There are small monuments and memorials nearby on the school grounds, but it is an active school so please be mindful and respectful.

There is no on-site parking, but a pay parking lot is at the bottom of the stairs leading up the hill to the school. If arriving by tram, get off at Peace Park and instead of following the road toward the park, go the opposite direction and cross the bridge. Follow this road straight and it ends at the stairs leading to the school on the hill. 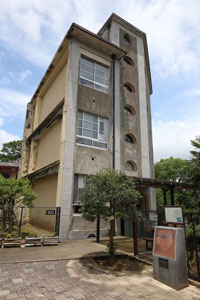 Nagasaki a treasure trove of art, history and lots of fun

MY FAVES: Night views in Japan