Thanks to the volcanic activity of the Palaeozoic and Mesozoic eras, the many islands that makeup Okinawa Prefecture share an interesting topography. About one-third of the prefecture is composed of Ryukyu Limestone, studies by Japan’s Ministry of the Environment have determined.

Due to the presence of this prehistoric limestone, you’ll find many caves to explore on the main island. Though some are not open to the public, many welcome tourists with illuminations and walkways. Some caves even offer opportunities to try your hand at spelunking or cave exploration. 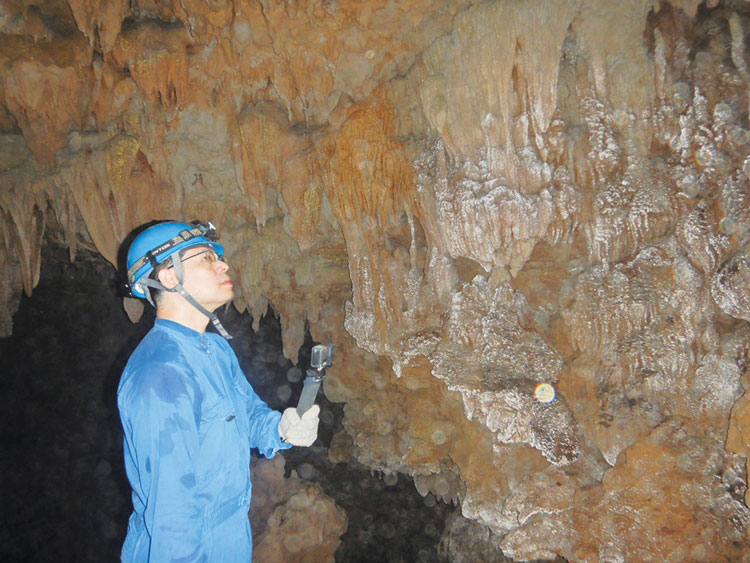 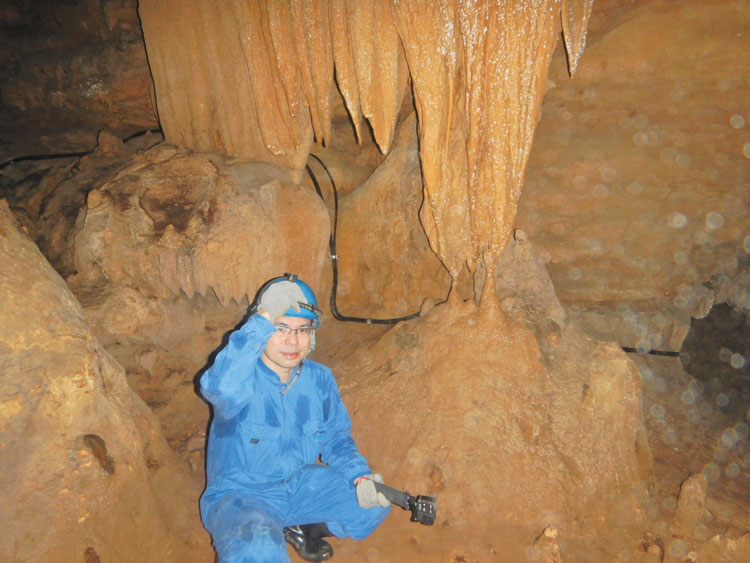 Matsuda Shonyudo, a group of large caves in Ginoza Village, falls under the second category. These caves are on the island’s eastern coast, in the same municipality which hosts Camp Hansen and Camp Schwab training ranges.

Looking to escape the beating sun, I made my way there in early August, seeking an adventure below ground. Matsuda Shonyudo is appropriately advertised as “a big adventure to an underworld” and offers something different than the usual water activities and popular attractions Okinawa is known for.

Before I could make my way down into the depths of the caves, I first had to stop at the Matsuda Koryu Taiken Center. Reservations are required in advance; visitors must check in at the center to enter. English-speaking tour guides are available, so call ahead for availability.

For my guided tour through the caves, I was paired with Asatsugu Jahana, a local. Despite having a knowledgeable guide who knows the neighborhood and caves inside and out, this tour was still a kimodameshi, or courage test, for me.

Before a safety briefing by two center employees, I was given a pair of overalls, a helmet, rainboots, and gloves to wear. The employees advised me to stay hydrated and to avoid touching fragile stalactites, bats, and other protected creatures. Also, to my regret, I had to leave my camera behind as they warned that it could get damaged in the wet cave.

Jahana, my guide, then led me on a 10-minute walk from the center to the entrance of Uunumee Do, which stands for “cave in front of plantains.” It was a steep entry to the cave and required a careful climb down a ladder to the rocky ground. 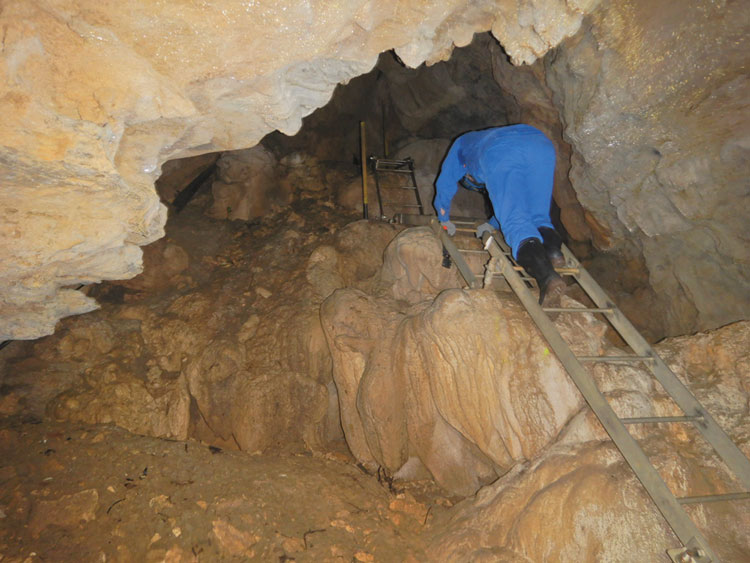 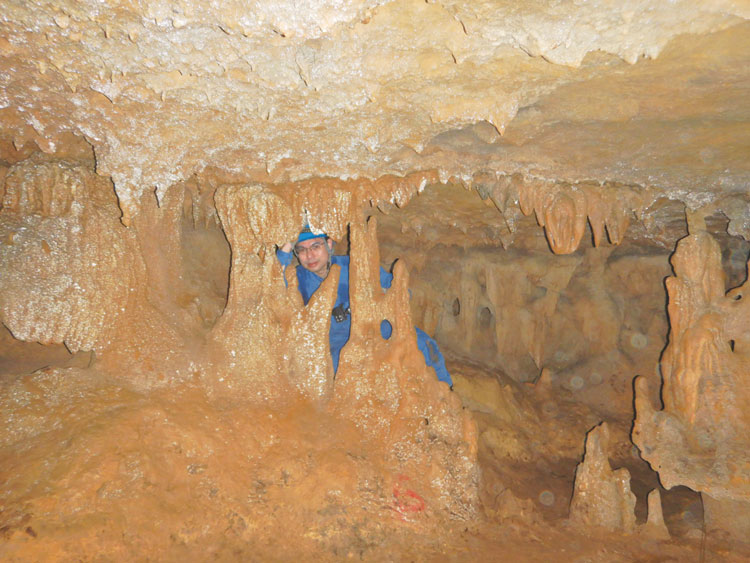 Not far from the entrance, we stopped at a relatively flat spot. It looked like a bank of a river with the water flowing underneath. No illumination was installed inside the cave, so it would have been pitch dark without headlights and a flashlight. A small creature with many legs caught my eye as I turned my head to look around the rocky cave walls.

“Oh, you are lucky; we don’t see Oogeji (cave centipedes) very often,” Jahan said with excitement. Though I am no fan of centipedes or millipedes, the unexpected encounter did brighten my mood. The tour guide kindly offered to take a photo of me near the creature to commemorate the moment. The multi-legged creature, however, may not have been camera-shy but was likely not used to intruders and scampered away.

We continued our walk into the depths of the cave and after about five minutes or so, we entered an open space with several large stalactites hanging from the ceiling. Next, we took another ladder down deeper to a limestone pool. With Jahana’s flashlight, I could see the water’s lightly rippling surface and the smooth texture of the surrounding limestone compared to the rugged texture of the cave’s walls.

The sound of the water was soothing, and I felt a little more relaxed in the dark cave. The cave adventure had provided quite a workout, and I felt a little sweaty in my overalls, but it was far better than being out in the sun. Plus, the stalactites’ curious shapes, textures, and colors were a welcome sight.

Some of the cave’s stalactites looked like curtains. In contrast, others reminded me of goya bitter melon because of their long shape and green color. According to Jahana, the color difference can be attributed to how each stalactite is formed. For example, stalactites will be white if they contain lots of limestone, or red if clay was present during formation. The gold sheen of others, Jahana said, is because bacteria on the surface of the forming stalactite.

We continued our walk and stopped at another cave room where we could see many bats perched on the ceiling or flying around. When we were moving onto deeper parts of the caves, some bats flew close to us as if to check on the unexpected company, which Jahana said was a rare encounter.

In May, the bats of this cave migrate to Itoman for childrearing and then return to Ginoza Village in August, Jahana explained. These bats had just made their way back when I visited. And, like in all caves where bats live — watch out for the bat guano!

Before leaving the bat cave, we also spotted a layer of limestone stacked on metamorphic rock, which is thought to have originated in the Eurasia continent. I was not expecting to see a sign of the dynamic geographical history in this cave, but it was interesting.

As we went deeper, the cave branched off at one point to a smaller route. To reach the small cave, I had to crawl through limestone. Fortunately, the path didn’t run long, and we soon hit a dead end. Here, we turned off our lights so I could experience complete darkness. Though scary at first, once my eyes adjusted, the stillness and quiet made me feel at peace.

After a moment in this tranquil space, our lights were back on, and we made our way through the main route down a steep left corner. We passed the exit and took several stairs to the last portion of the cave, where a thin channel runs through like a small river. Here and there, prawns were swimming through the shallow water.

The route to the exit had many ups and downs, just like the other portions of the cave. We made a stop from time to time to observe thin stalactites called “straw” or to knock on thick ones to experience their “sounds.”

When we finally reached the exit, I felt temporary relief. Jahana had forewarned me that there had been poisonous Habu snake sightings in the exit area in the past. So, cautiously, we made our way up and out of the cave, ensuring no snakes were lurking in the shadows.

It had been shy of two hours of exploring the caves when we made it back to the center. I was drenched in sweat but happy I’d tried something new. Though I regretted not being able to take photos of the beautiful prehistoric limestone, stalactites, and curious creatures within the cave, the sights remain engrained in my mind.

Mastuda Shonyuudo Taiken Course (Cave tour, 2-hour course)
Fees: 5,500 yen (high school student and over), 4,500 yen (between middle school-aged and 10 years of age)
*The above fees are for customers who join the tour as a group of two or more. Those who participate alone are subject to an additional 1,000-yen fee.
*The fees cover the cost for a tour guide, insurance, rentals of a headlight, a helmet, boots, gloves, a pair of overalls, and a plastic bottle holder.
*There is also a 1-hour course available (3,500 yen for high school students and above, 2,500 yen for between middle school-aged and 5 years of age)
*Free parking available (7 spaces).
Website
For reservations, contact the center at 098-989-8100 or matsuda.limestone.cave@gmail.com. Make a reservation by noon on the eve of your visit. The tours are subject to cancellation depending upon the weather.


COFFEE & BREAK GINOZA FARM LAB
After a few hours of exploring, working up a sweat, and an appetite, I was ready for rest and a good meal. Luckily, I knew a good place for energy replenishment nearby.

From Matsuda District, I took a five-minute drive to a roadside station to grab a bite at Coffee & Break Ginoza Farm Lab. The eatery is on the second floor of Ginoza Roadside Station. It is known for its delicious homemade hamburgers and a superb view over the east coast.

I ordered a classic burger (1,080 yen) and an iced coffee (280 yen) and sat near the terrace. This was my second visit to this place, and their hamburger had definitely left a good impression the last time I was here.

Once I dug in, I found it hard to stop chomping on the savory and juicy hamburger with its delicate sweet buns. Of course, my fatigue might have played a part in making the burger taste even better, but the view and the meal made my day. 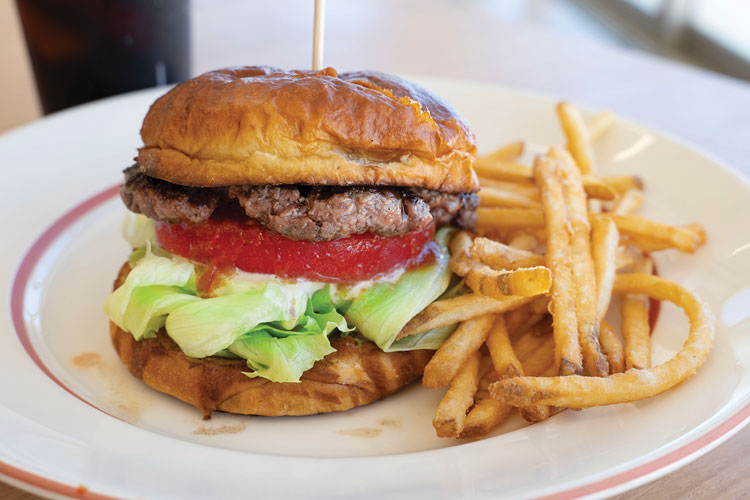 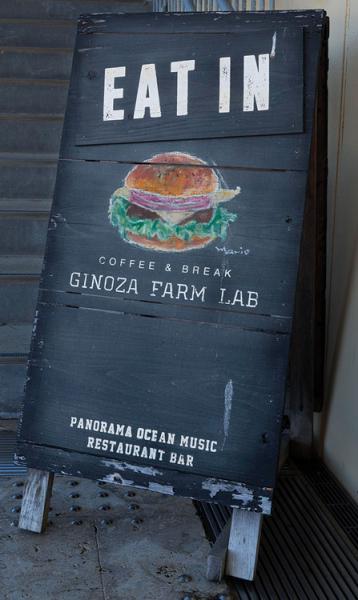 KATABARU TIDELAND
Not quite ready to call it a day, I made my way north for a stop at the Katabaru Tideland after lunch. Tidelands are pieces of coastal land or islands that flood during the high tide and appear for a short window at different points of the day. There aren’t many tidelands on Okinawa, so I wanted to check this out since it was only a 10-minute drive from the restaurant.

From the seawall, at around 1:30 p.m., the Katabaru Tideland’s reddish sands spread wide and far. Here they can spread up two kilometers max in low tide. I was expecting white sand but was surprised that the composure of the sea bottom here had created this color.

I walked down the seawall stairs to step onto the tideland, where many creatures started to wriggle around the closer I got. Upon inspection, I realized these were crabs walking sideways in a group toward the ocean.

Out of curiosity, I approached them, trying to take a close look at them. Still, as soon as I was within several meters of the herd, the tiny creatures upped their speed and scattered away.

I gave up trying to get close and sat to enjoy the superb view. Just me and the crabs (at a safe distance) taking in the serene landscape and sounds of the ocean. Eventually, the crabs eased their way closer to me, as long as I didn’t make any sudden movements. I carefully pointed my camera at them for a quick pic. Luckily, the shutter noise didn’t bother them, and these cool crustaceans carried on.

As soon as the group I photographed made their way into the water, I headed home, tired but relaxed from experiencing a side of Okinawa thousands of years in the making. 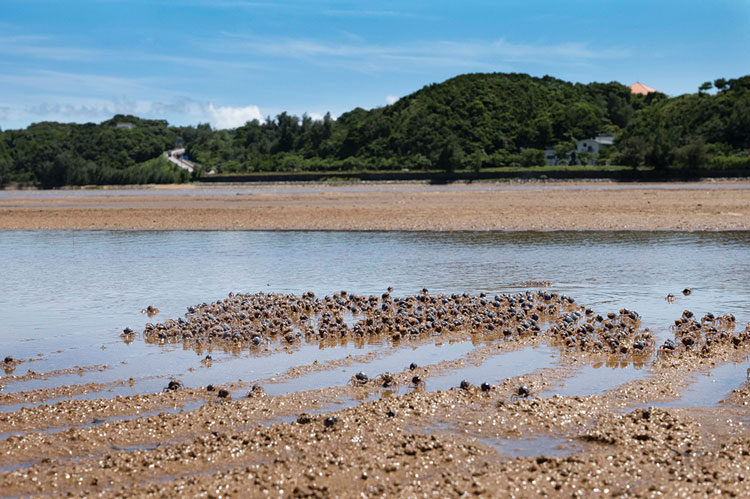 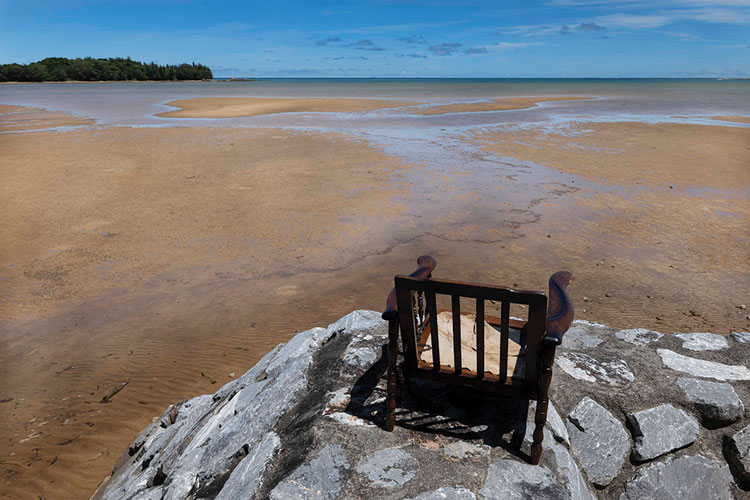 VIDEO| Explore the depths of Okinawa at Matsuda Shonyudo caves

Exploring Okinawa: What not to do at cultural sites