The story behind giant pigs, cows on Okinawa

The story behind giant pigs, cows on Okinawa

Just 20 minutes northwest of Kadena Air Base is a peculiar sight: a giant cow, 2 giant pigs and a sizeable piglet sitting in a parking lot. 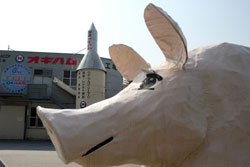 These semi-goliath statues, which could easily be the size of a small car, (or a minivan if you’re looking at the cow), on Route 58 might seem like any normal figures you would come across along the roadside in Texas. These, however, greet customers at the headquarters of OkiHam, a business that stocks grocery stores with various ham and processed food products.

According to OkiHam’s Facebook page, the cow and pigs were originally made as attractions for a cherry blossom festival in Nago City. It took company employees a month to make them by hand. They were small when they made their debut in 1983, but as years have passed, OkiHam has commissioned larger versions to grace their front door. The cow has wheels under its hooves, which made it easy to transport to the festival grounds along Route 58. The cow’s belly also has a hatch where people can get inside. During the festival, the cow blew smoke thanks to dry ice placed inside the belly hatch.

While the size of the pigs and cow alone are enough to catch anyone’s eye, it’s the extra parts added to one of the pigs that might make you do a double-take. A similar statue in Nago City with the same… parts… caused some controversy in 2017, where the local council argued it was too vulgar.

So far, both pigs still stand and will probably continue to be a “monument” invoking a head shake, or, at the very least, a laugh, on your daily commute. 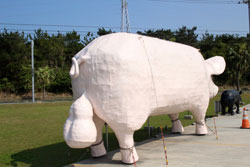