Since the late unpleasantness has created barriers to travel for service members, virtual travel and tours of dream destinations have become increasingly popular. Using the internet we can watch videos and live vicariously thanks to those living where we want to be. I’ve fallen in love with a place I’ve been virtually traveling to, though sadly even after the restrictions are lifted, I’ll still never get to visit because it ceased existing almost a century ago. The destination: Old Tokyo. 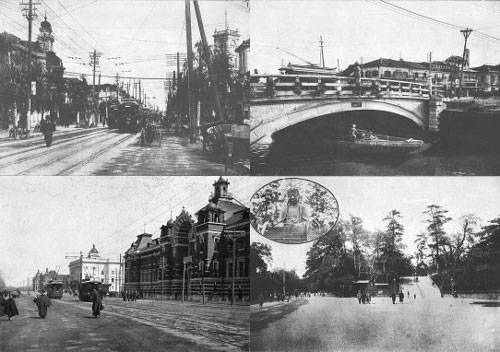 Though it may seem strange to call it virtual tourism when you’re just looking at photos from bygone eras, you’re still not getting to there (or anywhere) anytime soon. 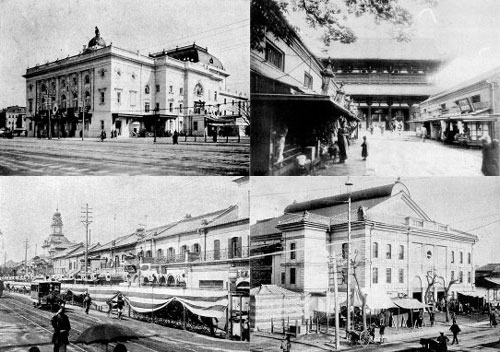 One of my favorite periods in Japanese history is the late Meiji-era (1868-1912), around the turn of the 20th century. Tokyo is the epitome of this era with its mix of traditional Japanese and contemporary Western elements. Back then as it is now, Tokyo was one of the most populous cities on Earth, yet it was still a “short” city with broad swaths of green space. Despite the developing centers of brick Western-style business and government districts, entire neighborhoods were still composed of wooden row houses that hadn’t changed in three centuries. 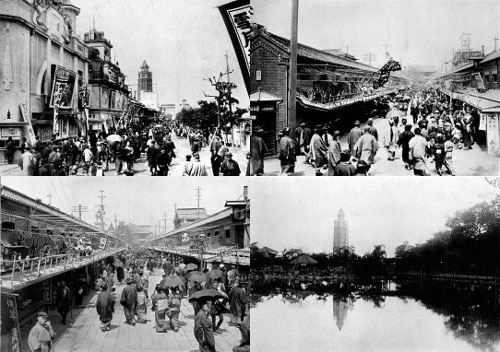 It’s fun finding my favorite places in Tokyo to see what they looked like when new and in their appropriate setting, then watching them change little by little through the early 20th century. Even in the seemingly timeless places the details shift, little things like fences, streetlights and, of course, people. It’s seeing all these elements that drew me to the old city and gave me a new appreciation for it. 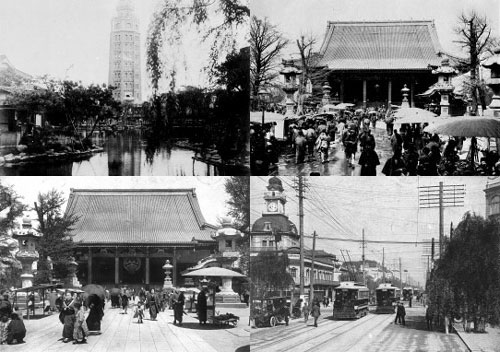 Some familiar sights like the Imperial Palace’s Nijubashi and environs never change, but districts like Asakusa and Ginza are largely unrecognizable, yet still remain fantastic and beautiful. Willows still line the streets and trams shared space with buggy-like automobiles and men pulling carts in Tokyo’s favorite shopping district. Asakusa had a theatre district that was alive with people in Western and Japanese clothing, its skyline dominated by the city’s only skyscraper, the 12-story red brick cloud-surpassing pavilion, Ryounkaku. The district’s adjacent Sumida River was busy with wooden fishing boats and barges. The only familiar sight to stay seemingly the same is the rows of shops on Nakamise Shopping Street and the red temple of Senso-ji, though both have been rebuilt since that era. 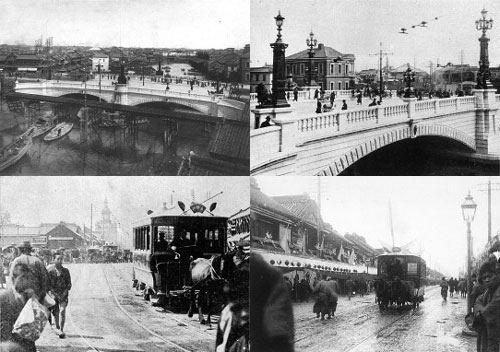 Sadly this Tokyo came to an abrupt end on Sept. 1, 1923, when the Great Kanto Earthquake struck, leaving at least 70,000 dead and much of the city destroyed including many of its famous landmarks. The firebombing of World War II saw Tokyo laid low again and for the places that survived these two catastrophic events, many could not survive being unceremoniously swept away by decades of urban redevelopment. What has survived, like Tokyo Station, are often surrounded by an alien landscape that marches further into the future while these peculiar remnants stay firmly rooted in the past. 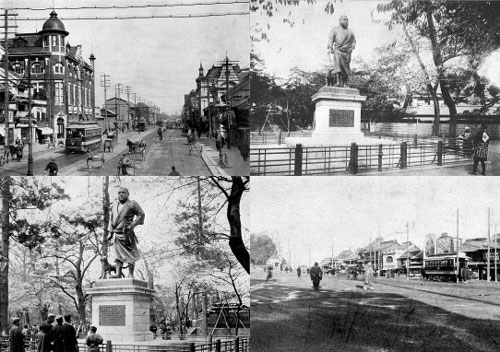 The best place to take virtual ‘tours’ of old Tokyo is the Japan National Diet Library’s English language Meiji and Taisho photographs section. This website contains many photo books from the 1890s-1920s that showcased the city’s unique and mundane sights. The website also has columns that share stories of these places to help paint a better picture of the past. Photos can be searched via point-and-click maps, category or by the books themselves.

Another fascinating website is Old Tokyo, which has many colorful postcards and photos with which it tells stories about the city.
https://www.oldtokyo.com/

Colorized period videos are also on Youtube, such as this one: https://www.youtube.com/watch?v=Qndcio-NjYY&t=4s

The best part is at the very end with the public water cups; a girl sticks a coin in the machine and it fills a glass with water. She drinks it, and then presumably puts the cup back without cleaning for the next person to use. We’ve come a long way in the sanitation department and thankfully Tokyo no longer experiences cholera outbreaks three times a decade (1890, 1891 and 1895).

All historic imagery is from the Japan National Diet Library online collection.

My Paradise: Tokyo my happy place