Yagaji Beach is located by Route 110, which connects the northwest coast of Okinawa’s main island and Yagaji Island. I passed by this beach when I toured the Motobu Peninsula by bike back in February. Its peaceful waters looked beautiful and soothing.

Several months after that, the view still lingered on my mind. So, I decided to go back there. According to the beach’s website, people can enjoy camping, BBQ, and kayaking there. For me, BBQ was the top priority because it had been a while since I enjoyed grilling on the beach. 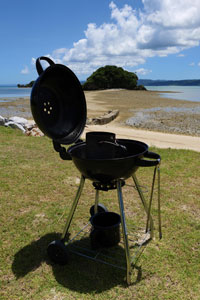 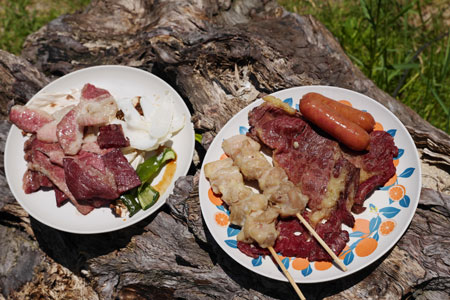 Because I don’t own a grill, I made a reservation to rent one on-site. I also pre-ordered food (beef, sausage, chicken on a stick, and vegetables) so I could just go there without too much preparation.

Paying 500 yen for the admission fee at the entrance, I drove into a camping site, which was a long stretch of lawn that ran along the coast. The lush green area was well maintained and comfortable. I pulled into a spot facing a small islet that floats not far from the shore.

The barbecue grill I rented was compact and easy to handle. As soon as I lit the charcoal, my appetite began to grow. I decided to cook up the vegetables first. I am sure there are proper ways to grill vegetables, but every time I barbecue, that curiosity doesn’t last long because of my appetite for beef. And this day was no exception. As soon as the edge of cabbages and onions turned brown, I took them off the grill to make room for the main dish.

Sizzling on the grill under the hot sun, the red beef looked even more appetizing than usual. As I grilled the beef and sausages, the aroma kept me tipsy, even without alcohol.

When I was done with grilling, it was around 12:30 p.m. I seated myself on a log with a plate full of grilled food in my hands, facing the ocean and the islet. I certainly felt tired after cooking in the strong sunshine. Still, with one bite of the beef, the fatigue was off my mind. While enjoying the grilled food and ocean view, I thought back to my childhood when my family camped out by the ocean and enjoyed the same food.

Once my stomach was full, I was ready to explore the ocean, which looked very enticing.

It was around 1 p.m. The tide was low, and a line of sand was exposed above the water, connecting the shore to that islet. According to the beach’s staff, this natural bridge is commonly called “pure road” and is believed to bring happiness if visitors cross it to the small island. If they happen to be couples, the trip can bring romance, at least that’s what the beach’s website says. Although I was alone on that day, a walk on the sandy bridge to the islet seemed like the thing to do, even if it didn’t bring some luck for love.

The distance to the islet was about 150 meters. The sandy road felt a little bumpy under my beach sandals. Up close, the islet looked enormous.

Just like many other rocks and islets around Okinawa, this one has a skinny bottom, making it look like a giant mushroom. The top was covered with shrubs and trees. The huge structure was composed of two parts: one big rock and a small one lining up horizontally to the shore. There was a gap between the two, through which I could see two more islets floating in the distance. There were a few people around those islets. They must have walked through the low tide to get there. So, I decided to follow their steps. 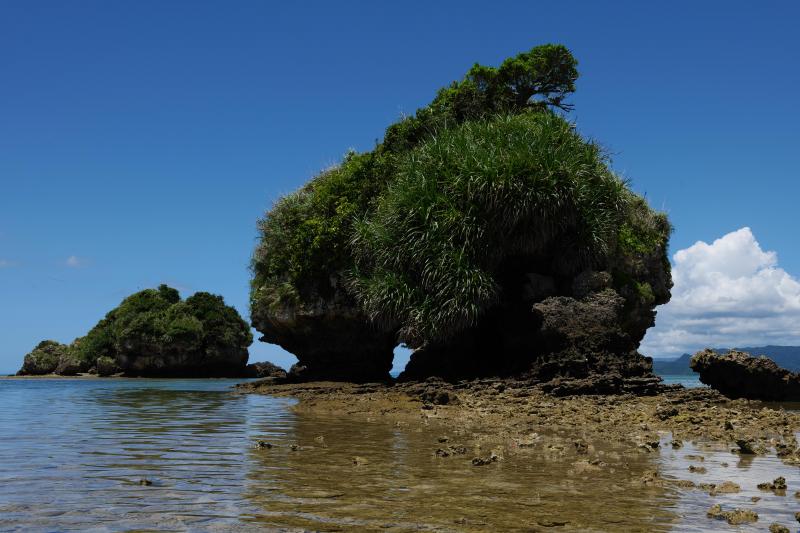 As I left the first islet and headed to the second, the water remained shallow. At times the surface of water reached my thighs, but it soon subsided back to below my knees. Here and there, small fish were swimming by. There were also sea cucumbers lying at the bottom.

After going more than 200 meters, I came close to the second islet. There was also another one about 50 meters away. The one close to me had a cave that ran from the front to its back. Out of curiosity and also looking for some shade, I decided to explore the cave.

Inside, the grotto was low-lit by the sunlight bounced off some puddles of water. In the dusky space, I could see several crabs hiding themselves in between cracks on the rocks. I was not sure what other creatures were lurking, but I didn’t feel any danger. 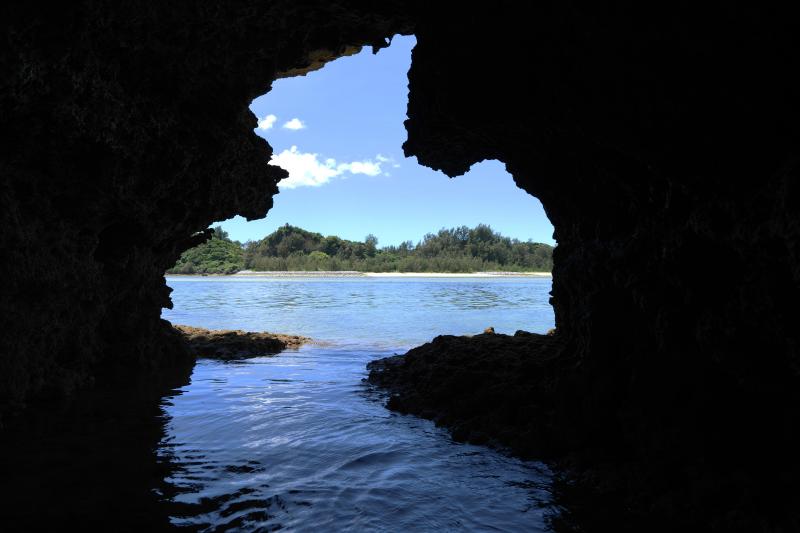 I just sat there for several minutes, enjoying the view of the shore through the mouth of the cave. The waters around the islet cast blue light into the cave, creating a relaxing atmosphere.

When I left the islet with a cave after 10 minutes or so, I spotted a possible danger for the first time. As was I walking to the other islet, there was something transparent floating on the surface of the water and less than a meter from me. It took me several seconds to realize it was a jellyfish. Although I was not sure if it was a box jellyfish, the idea of encountering potentially dangerous life forms made me nervous.

Recently I heard several news reports where locals or tourists were stung by this marine creature with toxic venom. So, I quickly left the area. Fortunately, the waters remained shallow and posed no difficulties. The last islet I visited looked similar to the first one. As I walked around, I spotted another jellyfish waiting for me. Taking it as a sign of a point of no return, I decided to head back.

By the time I was back on the shore, the tide was getting high. I spent some time just watching the natural bridge gradually disappear.

In total, I probably walked about 1 kilometer in the water. Exploring such a distance in the ocean without swimming was something I had never experienced in Okinawa. I felt tired for sure, but also very much satisfied with my time on Yagaji Beach.

*During Golden Week, the above fees are adjusted to 750 yen and 450 yen respectively.

*You can also spend the night camping or staying at an on-site lodge. In that case, the admission fees will be 1,000 yen for 12 years old and above, 600 yen for between 11 and three years of age.

*For more information, contact Yagaji Beach Office at 0980-52-8123 or info@yagaji-beach.com