Bullfights on Okinawa are a huge spectacle that draw huge crowds of people cheering on their favorite bulls.

Unlike the bullfights of Spain and Latin America, Okinawa’s bullfights are considered less barbaric since no bulls are killed at the events. Bouts are fought between two bulls with no matador, but the collisions stir up no less excitement than the deadly fights in Spain.

According to Uruma City, bullfighting on Okinawa could’ve started before, but the oldest bout on record was during the Meiji Era (1868-1912). The pastime has been attracting fans for a long time and its longevity on the island definitely signals to there being something special about it.

It had been nearly four years since I’d last attended a bullfight, so I made my way to the Ishikawa Multipurpose Dome to catch the Wakaushi Uijin Yomitan Tougyuu Taikai, or Yomitan Bullfight Tournament for First-time Young Bulls, in June.

This particular tournament is a regular contest where bulls from all over the island participate. The Zento Togyu Taikai is an all-island bullfighting competition held three times a year and is essentially the grand slam tour of the sport on Okinawa.

Soon, the first bout approached, and the crowds started to gather. There was room for social-distancing and many spectators were masked, so it did create a quieter atmosphere than the one I remembered from four years ago.

Along with the many locals in attendance, there were also a few Americans rooting for the bulls.

Michael Almonte from New Jersey said the bullfights were entertaining.

“I’m from the city, so I am not around bulls a lot,” he said. “Watching the bullfight was very entertaining for me.”

Byron Starnes from Washington D.C. said this was his first time at a bullfight and that growing up in Oklahoma he’d never seen anything like this in the States.

“I like when the bulls charge each other and seeing the strength of the bulls is pretty cool,” Starnes said.

Shortly past 1 p.m., the mood of the venue lightened as bulls entered the ring. As if to pump up the mood, the bulls roared and like you’d see in a boxing match, some of the bulls had their own theme music.

While waiting for a match to begin, bulls rubbed their heads against the ground and kicked the dirt. Their moves reminded me of sumo wrestlers checking the surface of the ring with their feet or throwing salt before a bout. It was obvious the beasts were aware of the fight they were getting into.

The rule of the fight is very simple: if a bull escapes, it loses. Although it may not take many words to describe the rules, what happens in a fight includes complex tactics and moves. The tournament featured a total of 11 bouts, each with two opponents of roughly the same weight class. Small bulls weigh in at around 750 kilograms, while bigger ones were more than 1,000.

Don’t let their size fool you, whether small or large, these bulls all have quite the power, strength and agility to complete strategic moves. During the fights, once a bull went on an offensive, the other bull would make quick steps backwards and sideways in defense. Sometimes they intentionally took backsteps to create a distance before furiously rushing forward.

When the bull’s horns were tangled with each other, it was an opportunity to sway and throw their opponents by twisting their necks. The sharp points were often pushed against the opponent’s nape, causing the skin to bleed. Every time their horns collided with each other, a loud smacking sound filled the air.

On this day, some bouts lasted long, taking more than 10 minutes to decide a winner. In those matches, the bulls breathed heavily and sometimes stopped charging with their heads pressed against each other. Just when a bout seemed to be in a deadlock, there would be a sudden dramatic end sending the crowd into a roar if their favorite won or lost.

Once a bull pulled back its head because of fatigue, its opponent rushed forward, forcing the exhausted one to turn its back and run. In many matches, both bulls pushed to exhaustion were urged by their seko handlers chanting “Heeyai, Heeyai!” and stomping on the ground.

Erin Hankins, who is also from Oklahoma and based at Kadena Air Base, said this her first time at an Okinawa bullfight.

“We are from Oklahoma, which has a lot of rodeos… but this is a little different,” Hankins said. “It doesn’t seem like the bulls are too bothered though (by the seko handlers). Hopefully, that’s the case.”

The bullfights held in Okinawa are truly a unique experience unlike any other. The sport is embedded in the island’s history and draws people of all ages for a fun afternoon of cheering and witnessing the bulls’ strength. Come to the dome and experience this special entertainment that Okinawa has to offer. 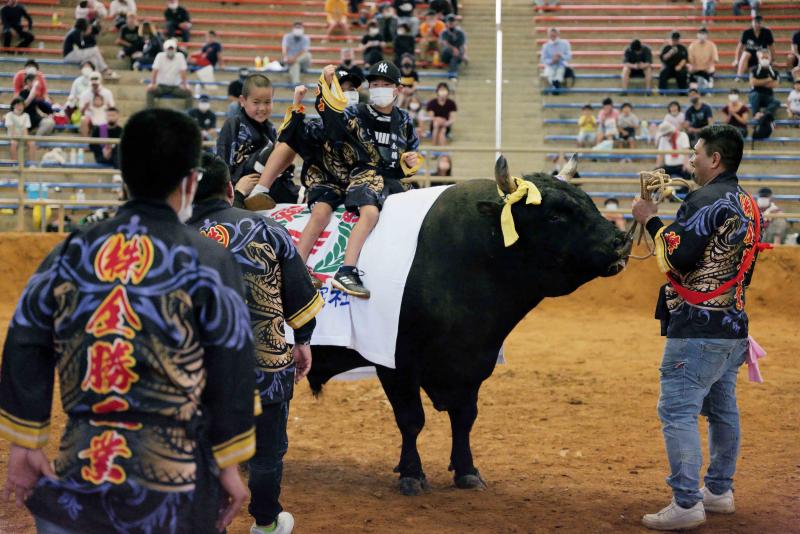 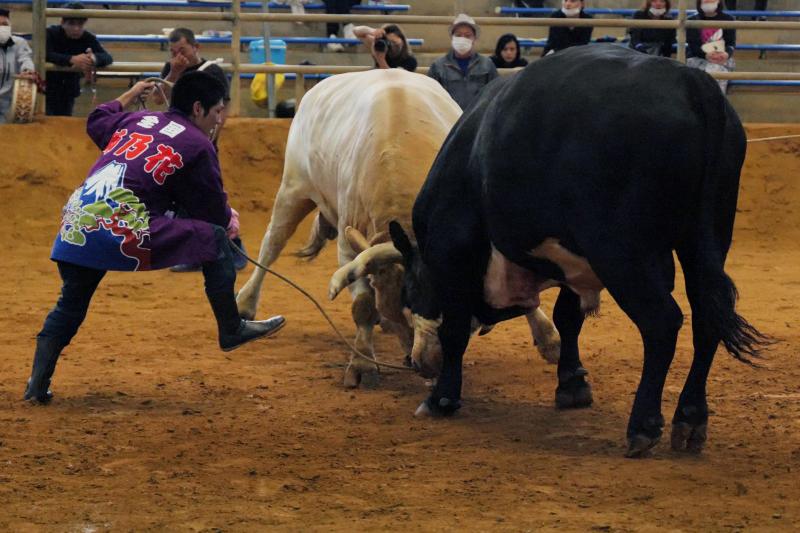 *Tournaments normally take place throughout the year (on Sundays).

Did you know?: Bullfights on Okinawa