I am the kind person who feels an urge to add the word “video” or “digital” whenever I hear the word “game.” To me, board games seem too prototypical to be interesting. In an age where computer graphics can do it all, what’s the point of doing it the old way, with a dice, miniatures and maps?

For an Okinawan who spent a substantial portion of his childhood playing the first generation of Nintendo games like Donkey Kong and Mario Bros. (before they earned the title “Super”), I always wondered why people would settle on playing Monopoly or The Game of Life with family and friends.

That was the question I had in my mind recently when I knocked on the door of Kappa Castle Game & Hobby, a board game shop near Mihama American Village. Hearing of its growing popularity among Americans, I had to see what the fuss was all about.

It was on an early Friday afternoon, still an hour before its opening hour and Ryan Stumpff, the owner of the shop, welcomed me with a smile.

Taking one step inside, I was a little surprised. To me, the shop looked more like a section of Barnes & Noble than a place for gaming. There were shelves placed along the walls, but the space in the middle of the room was empty. Ryan told me that area was reserved for tables and chairs that would be set up when people came to play games.

On the shelves, I could see fancy packages in various colors and designs lined up, with familiar faces like goblins, dragons and knights casting a challenging eye on me. While some had an artistic look, others looked like comical pop art. Many dice and miniatures were also on display. What I didn’t see was Monopoly or the Game of Life. 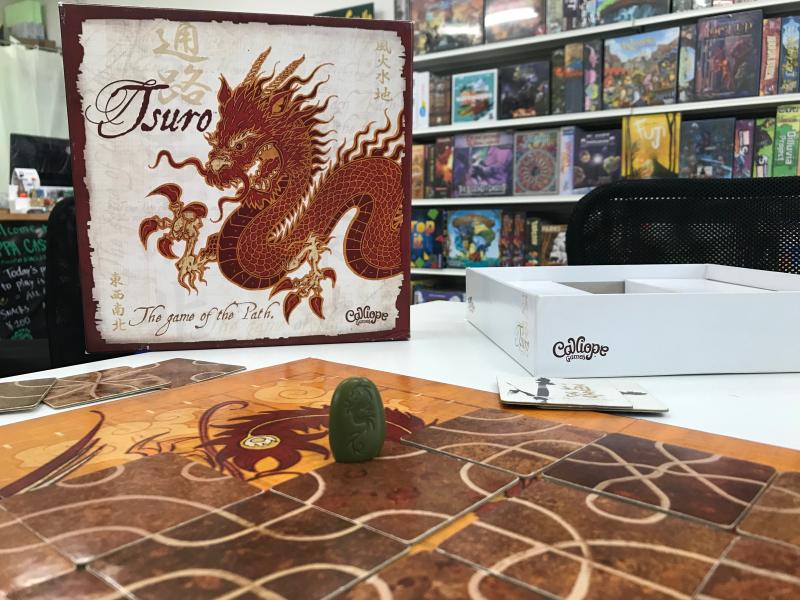 “We are an import game shop and play space,” Stumpff said, pointing out popular games like Quacks and Drop It. “We have many import games from America to sell, as well as about 200 games to play.”

With soothing music playing in the background, the quiet environment drew a sharp contrast to the noisy arcades or bars I frequent for different kinds of fun. Before I could digest the meaning of the setting, Ryan introduced me to some games.

The first game we played was Tsuro, which, according to the shop owner, is one of the most popular. The rules are simple: each player draws three tiles from a facedown stack and places one of them on a square board, before drawing another. Each tile has various lines drawn on it which indicate paths. Each tile needs to be positioned in a way to connect its lines to those on others.

With each turn of placing a tile, players move their markers along the path. A player will lose if his or her marker falls off the paths by touching an outer edge of the board.

At first, I played without seeing the point of the game. However, as more and more paths came to be connected and the closer the distance between my marker and Ryan’s became, I found myself absorbed in the game without even noticing. It didn’t take me long to realize that markers are destined to touch an edge sooner or later. I thought hard on each turn to keep my marker away from the edge. However, Ryan often came up with a hand that created a path that not only moved his marker to an advantageous position but also caused me trouble. It took the shop owner only five minutes to beat me. But the five minutes were packed with twists and turns that took me by surprise. 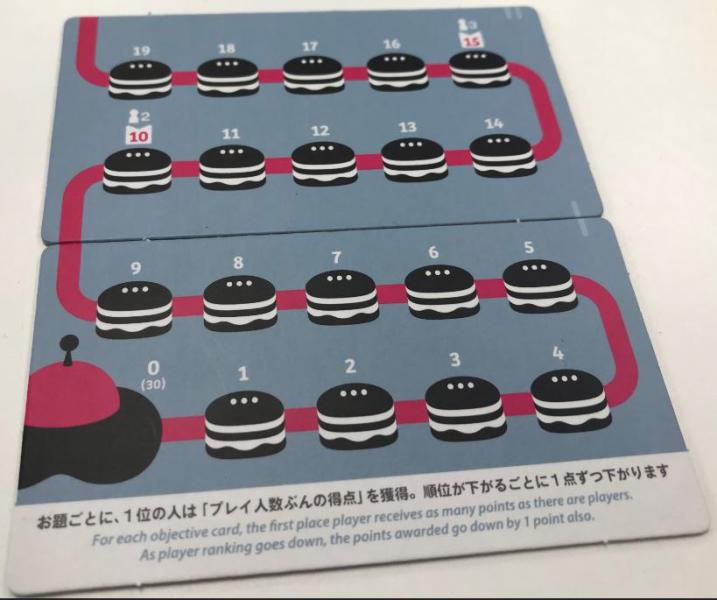 The next game we played was Nine Tiles Panic, where each player places nine tiles in a square shape of three by three tiles. Just like Tsuro, it requires connecting paths drawn on each tile to complete a map of a town. But there is a big difference: Speed matters. Each player has nine tiles to put together, each of which has paths drawn on both sides. Plus, paths aren’t the only drawings of the tiles, images like houses, boys, dogs and aliens are also drawn on some of the tiles. In each round, points are earned depending not only speed but also on other conditions such as “the one with the longest road” or “the one with the largest number of boys.” At the end of each round, players advance their stones on a route drawn on a sheet, following their points.

Matching paths on the tiles took both intuition and logical thinking. When it is coupled with a competition on speed, the game became a brain-wracking experience like I had never experienced before.

Once again, Ryan beat me with no problem, but I felt more impressed with the ingenuity behind the game than chagrined. It wowed me to see a different phase unfolded in each turn.

Trying to help his struggling opponent, Ryan offered me a lot of advice. Regardless of his mercy, I ended up losing most of the games I played. But it was fun talking with him.

Later, I had a chance to speak with some visitors to Kappa Castle about why they are drawn to the shop and its board games. After my first experience of board games, I could relate to what they said.

“Probably just being able to interact with friends,” Roger Fitch, a first-time visitor from Kadena Air Base, said when asked why he likes board games. “Being able to imagine yourself somewhere else.”

Fitch, who described himself as a regular player of board games, learned about Kappa Castle through word of mouth. He’s happy he did.

There’s also a regular customer who knows the shop since before the shop moved to its new location.

“We used to go to his old shop when he was down here near Camp Kinser,” said David Madero-Craven from Camp Shields. “He (Ryan) moved up here, much closer, I like them out here now. We come here, browse games, we play D&D, so we browse his miniatures, dices, stuff like that all the time.”

He described the fun of playing boardgame by saying,

“I can’t say one thing in particular that draws me to the games. Their ability to strategically beat your friends, that’s something,” Madero-Craven said. “Or work together with someone else and just spending time with people and playing.”

By the time I left Kappa Castle, board games started to make sense to me. Although the multi-dimensional fun remains hard to explain, it was no longer a mystery.

GPS Coordinates: N 26.310195, E 127.762175
Hours: 2 – 10 p.m. (noon – 10 pm. on Saturday)
*Closed on Tuesday and Wednesday
Facebook: https://www.facebook.com/KappaCastleGame/
Twitter: https://twitter.com/kappacastlegame
Instagram: https://www.instagram.com/kappacastlegame/
* In addition to game sales, the shop offers a game library for customers to play. (1,500 yen for Mon - Thu, 1,900 yen for Fri – Sun)
* No outside drink or snacks allowed at the shop.
* Check out the social media for a change or temporary closure.
*  Yen, cash, credit cards accepted. 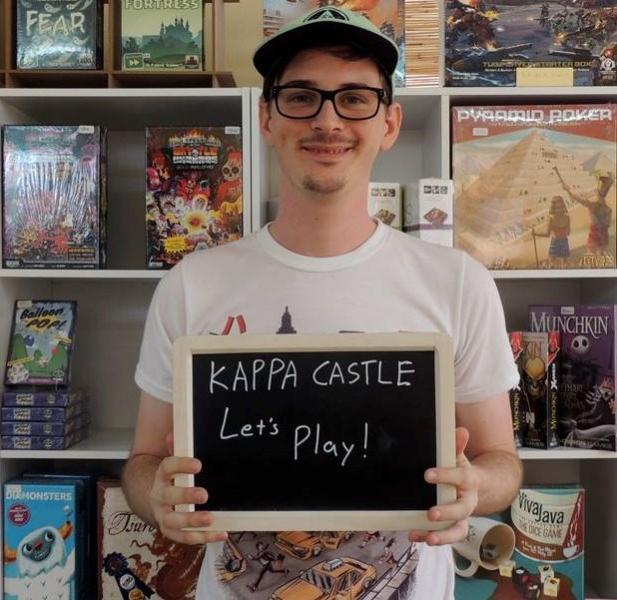 A store where people come in and play games … really?

Yes. Board Game-style cafes are becoming more and more popular in Japan. We’ve paired it with a traditional shop where customers can freely shop and go or stay and play from our library of over 200 games. We will suggest and teach games to anybody of any experience level. We also offer snack and non-alcoholic drink options so people can play as long as they like!

For some people, it’s having a space to meet new friends and learn new games. For others, it’s the fact that we import games for sale in our shop and try to get new items within the week of their release.

You’re celebrating your 2nd anniversary and you’ve had some success. Why do you think that is?

I think it’s from the positive word of mouth. We try to deliver a good experience teaching games, or making sure people are walking away with a product they know they will enjoy.

You said about 70 percent of your customers are from the military community. What draws them to your store?

We’ve become more centrally located after our move to Chatan (about a 5-minute walk from American Village). Positive word of mouth has also been huge. We try to offer products that do not exist anywhere else on island. I also feel like our shop is offering a healthy alternative when it comes to liberty.

You are more than just games, please tell us the other aspects of your business?

Other than selling/playing games, we can 3D print miniature figures for customers favorite games and also paint them customers. We also import rare exotic dice made from stones, fossils and wood, and have even been trying our hand at producing our own line of dice sets.

What are your future business plans?

Right now, our goal is to continue working to get even more companies to work with us to import their product, attend and host more events to support our hobby, and look to increase our staffing to keep the shop open longer throughout the week.

Driving in Okinawa? Stay out of the bus lanes!