People who have driven to Karuizawa in Nagano Prefecture might have noticed through the car window the generous cone-shaped mountain protruding from the rock-strewn ground. 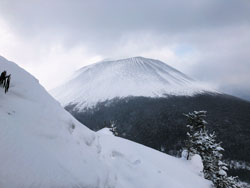 What you saw is Mount Asama, and active volcano that reaches 2,568 meters into the sky. Mount Asama has been active for hundreds of thousands of years and scientists reckon that it has not lost its energy. You can actually see white smoke puffing from Asama’s opening from far away. It’s difficult to distinguish it from the clouds.

Traces of Asama’s great eruption in 1,783 are preserved in the Oniohidashi Park’s dry lava flow, which attracts many tourists.

If you are a climber, you must know that it is prohibited to come any closer than 2 kilometers of the volcano’s crater. But you can enjoy the magnificent sight of Asama by trekking around the caldera topography. A couple of weeks ago I took aim at the top of Mount Kurofu, one of Asama’s calderas.

Driving up to 1,973-meter high Kurumasaka Pass on a cold Saturday morning, I saw many skiers and snow boarders. It looked like hikers were in the minority. My wife and I began our hike at Kurumasaka Visitors Center. We estimated it would take two hours to get to Kurofu’s 2,404-meter peak.

This was quite a hike. Wading through waist-high snow, we tried not to deviate from the track made from hikers ahead. We kept a steady pace, and after 100 minutes, we reached the ridge of the caldera. We were expecting to be able to see Asama wearing her wonderful white snow against the backdrop of a beautiful blue sky. But we couldn’t. The snow and clouds hid Asama. And it was bitter cold. 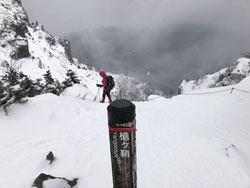 We pressed on, even though the wind got stronger and the air colder. My right hand began to ache as I continually took off my glove to check my GPS and take photos on my iPhone. I acknowledge that exposing your naked hand during a winter mountain climb is a cardinal sin.  After struggling in the snowy path, we reached our goal: Kurofu’s peak. Once again the visibility wasn’t so good and it was still shivering cold.

If the weather had been cooperating, we would gone to the next peak: Jakotsu-dake. But we came to our senses and abandoned that idea. We exchanged pleasantries with some other hikers, crammed some M&Ms in my mouth in hopes of getting a needed energy boost, swigged down some hot coffee from my thermos and headed back. I was relieved that we had enough power to get back, but my hands were so numb that I couldn’t hold onto the stone-cold rice balls we had brought to snack on. 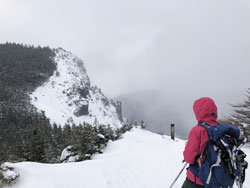 It was quite a hike. “I’m tired,” were the first words my wife mumbled when we got back to the car. As for me, I promised myself that I would come back ... when it got warmer.

Did you know?: Mt. Fuji is an active volcano

My Paradise: Camping at Lake Motosuko near Mt. Fuji

My Paradise: Backpacking adventure through gorges, alpines in Japan