In Yamaguchi Pref., a spooky legend and risky fugu await

In Yamaguchi Pref., a spooky legend and risky fugu await

Centuries ago, Hoichi, a blind biwa (lute) player, lived at Amidaji Temple in Akamagaseki on Honshu’s southern shore. A skilled musician, it was said his musical rendition of the tragic tale of the Battle of Dan-no-ura could move even goblins to tears. One night while alone in the temple, the blind musician was playing to pass the time when the booming voice of a samurai commanded him to follow him, so that he may play for his lord who had heard much about Hoichi’s biwa prowess.

A samurai was never one to be disobeyed, so doing as he was told, Hoichi followed him into the night.

When they arrived at the lord’s palace gate, Hoichi was puzzled because though blind, he knew the area well. There was no lord’s palace here and the only gate belonged to Amidaji Temple. They were led into the palace where he could hear voices speaking the peculiar language of the courts and the rustle of silk clothing. Walking over tatami he was seated and commanded to play the tale of Dan-no-ura.

And so he began to perform the epic which would take a full week to complete. He played and sang of that history-altering naval clash between the Taira and Minamoto just off shore of Amagaseki. How when the battle turned against the Taira, they were lost to the unforgiving sea- the soldiers, the nobles and their families, and child emperor Antoku. Amidaji Temple was built to venerate Antoku and soothe the souls of those lost during the ancient battle. The performance moved all present and Hoichi could hear how they wept. When he finished for the night he was returned to his temple and ordered never to speak of his command engagement. The samurai would return the following night to retrieve him for the next part of the performance.

In the morning, the temple priest was concerned about Hoichi because he refused to speak of where he went the previous night, and so had him followed. Well after midnight, Hoichi abruptly rose from the temple veranda and disappeared into the drizzling, dark night alone. He moved swifter than a blind man safely could and the priest’s servants quickly lost track of him. After a fruitless search, they returned to Amidaji where they heard a biwa and found Hoichi playing amongst the temple cemetery tombs, his only audience ethereal balls of fire suspended mid-air all about the cemetery.

The following day the priest confronted Hoichi and warned him that he was playing for spirits that would rip him asunder once he had satisfied their demands. To protect Hoichi the priest and his acolytes wrote sutras on his body from the top of his head to the soles of his feet. Properly protected from evil spirits, Hoichi was told to wait in his usual place as if in meditation. The spirits would be unable to sense his warded body and once tricked would leave him be.

The samurai returned that night but Hoichi did not come when beckoned. Searching the veranda, he found only the bard’s biwa and two ears (the acolytes had forgotten to put sutras on them!). The samurai collected the ears to show his lord that Hoichi was no more. Hoichi remained silent as the ears were ripped from his head and stayed unmovable as a statue until the break of dawn.

The spirits never again bothered Hoichi. He would gain great fame and wealth playing his biwa, and would be known as Mimi-nashi Hoichi, or Hoichi the Earless.

Hoichi’s story was first written several centuries ago, but it came to the English-speaking world in 1904 when it was recorded in Lafcadio Hearn’s Kwaidan: Stories and Studies of Strange Things. Though a century old, the ghost stories are still hauntingly written and bring to life the Old Japan where the line between history and myth is blurred. 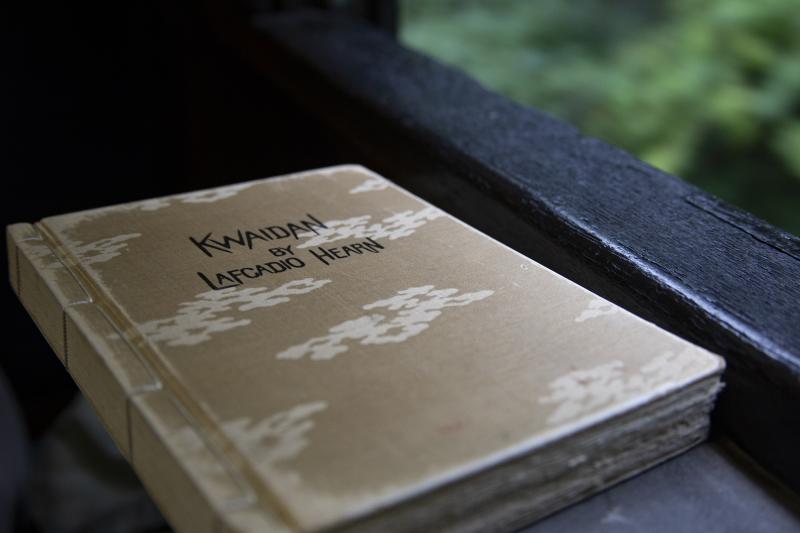 Hoichi may have been a myth but Amidaji Temple is real. Today, however, it is the Shinto shrine, Akama-jingu, because it venerates an emperor. Visitors enter through a splendid vermillion and white gate that draws inspiration from a mythical undersea palace and beyond the main hall the souls of Dan-no-ura are still laid to rest in memorial mounds and graves. If you’re feeling adventurous, a path in the wooded hills beyond Akama leads to more memorials and graves that stand alone in the middle of the forest. Not unnerving in the slightest!

Hoichi has a statue and memorial hall. And, for those that want to learn more about the Taira or Heike clan and the 1185 A.D. Battle of Dan-no-ura, there is a treasure hall with artifacts. 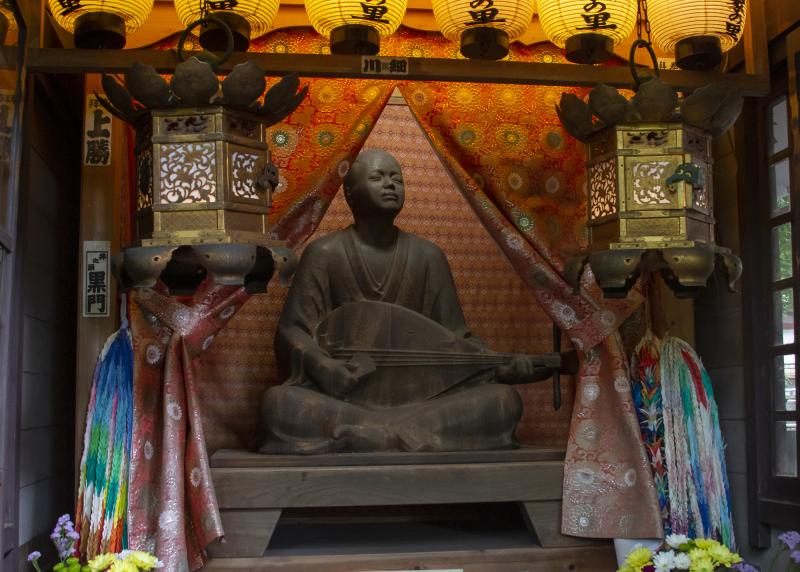 Akama Shrine is surrounded by sightseeing possibilities for the whole family as several museums and the Karato fish market are nearby.  Karato is an easy-access place for visitors to try Shimonoseki’s favorite delicacy, fugu (puffer fish). Don’t let its inaccurate depiction in Western media scare you away, fugu is safe and delicious. My favorite preparation is the blackened fugu fish and chips at the former British Consulate.

And after tempting your culinary fate over dinner, why not take a walk through the forest beyond Akama Shrine and listen for the sound of the biwa?

My Paradise: A golfing adventure in and around Iwakuni

Immerse yourself in Iwakuni

Scratching the surface: A history of cat street